I’ve owned horses for about six years but it was mainly at the lower end of the scale to begin with. I’m only 39 and an investment manager, and as my wealth has increased, I’ve been able to improve the quality. Pound for pound Gary Moore is the best trainer in the country, and he’s only 30 minutes from me, so I went to see him with a budget. He phoned me the next day and said he’d bought two for me! They were Haddex Des Obeaux, who won second time out at Fontwell, and Porticello, who has won at Wetherby and Chepstow and should have won at Doncaster.

which turned out to be useless, including one I named after my son, who is as slow as a hearse. But with Porticello it’s been nearly all highs, although we were disappointed when he didn’t win at Doncaster after the forecast rain failed to materialise. It was obviously frustrating when the Welsh Covid restrictions meant we couldn’t be at Chepstow for the Grade 1 win in the Finale Juvenile Hurdle, but I was elated by his win all the same. Being there is important to me, and I’ve been at Lingfield for all three of Movethechains’ wins, including when he gave Gary his 1000th jumps win.

Porticello will either run at Sandown on February 5 or at Haydock a couple of weeks later in the Victor Ludorum. My preference is Sandown, as it’s my

favourite track and it’s local, but he’ll go where his best chance is. We then have to mind him, as his future is over fences. We’d love to run him in the Triumph, but he’d definitely want soft in the going description. He’s huge and a big baby, and he’s an absolute freak to be doing what he’s doing over hurdles. I think we can rule out the Grade 1 at Aintree, but I’ve hopefully got another one from France for that called In the Air.

I’ve got a superb relationship with Gary. I speak to him four or five times a week, and I go down to the yard at least a couple of times a month. Gary is a great communicator and a top trainer. The staff are great, the facilities are unreal, and of course he’s got his boys riding out there. It’s a great environment for the horses and Gary is super shrewd and has placed them really well. The number one thing in relations between owner and trainer is honesty, and Gary is really honest. I also have six with Neil Mulholland and seven with Joseph Parr on the Flat, for interest through the summer, but they are my only trainers for now.

Having increased it a lot in the last 12 months I’m pretty involved already  now, with probably 20 horses in training and a substantial improvement in quality. I’m in it with my eyes open and I treat it as a hobby rather than a business. I accept that the only way I’ll ever make money out of it is if I got lucky with one of the Flat horses, but a better return in terms of prize-money would help keep the costs down. The main thing that might threaten

the scale of my involvement is any reintroduction of Covid restrictions on racecourses, because what’s the point of having them if I can’t go and watch them run? 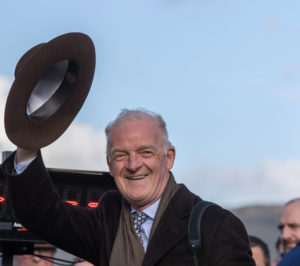