Fresh from a superb Grade 1 treble on the opening day of the Dublin Racing Festival courtesy of Minella Cocooner, Vauban and Blue Lord, trainer Willie Mullins repeated the feat on Sunday as Chacun Pour Soi, Galopin Des Champs and Sir Gerhard all struck at the top level at Leopardstown.

Rich Ricci’s Chacun Pour Soi captured the Dublin Chase (2m1f) for the third consecutive year with a dominant victory against four rivals. Paul Townend always looked to have matters in hand on the prolific ten-year-old, who powered to a 12-length success over Dunvegan.

Six-year-old Galopin Des Champs, owned by Audrey Turley, is a coming force in the younger jumping division and the Timos gelding recorded an easy triumph over previous Grade 1 winner Master McShee in the Ladbrokes Novice Chase (2m5f), with Townend again doing the steering.

The Mullins-Townend Grade 1 treble on the day was completed by Cheveley Park Stud’s Sir Gerhard, the six-length winner of the Tattersalls Ireland Novice Hurdle (2m).

Outstanding mare Honeysuckle maintained her unbeaten record under Rules with victory number 14 in the Irish Champion Hurdle (2m), her third straight win in the Grade 1 contest.

Rachael Blackmore always had matters under control as the eight-year-old moved effortlessly into the lead two out and sauntered clear to score by six and a half lengths over Zanahiyr.

Honeysuckle, trained by Henry de Bromhead for Kenny Alexander, will now bid to land her second Champion Hurdle at the Cheltenham Festival next month.

Musselburgh staged a good quality Sunday card and the Nicky Henderson-trained Impulsive One booked his Cheltenham Festival ticket with a decisive success in the Listed Scottish Triumph Hurdle (1m7½f) under James Bowen.

The four-year-old gelding might not be bred to be a hurdler – his sire Union Rags won the Belmont Stakes on dirt – but his aptitude for the winter game is clear as he recorded a four-length victory over Innatendue for owners Simon Munir and Isaac Souede. 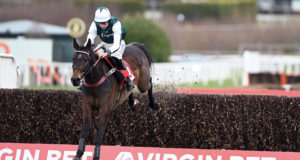