With the major jumping festivals around the corner, we speak to five owners with high hopes of success on the big stage – first up Graham and Alison Jelley, owner of Guard Your Dreams

Background: Progressive hurdler has risen through the ranks to make his mark in Graded company, winning twice at Cheltenham this season, including the Grade 2 International Hurdle, and running a solid third behind Stormy Ireland and McFabulous in the Grade 2 Relkeel Hurdle on New Year’s Day

We bought him out of a field at Robert Chugg’s. We’d had Cogry, who Robert bred, and when we visited the farm, Guard Your Dreams particularly caught my eye among some lovely young horses. I made Robert an offer and we did the deal. He did pretraining with Willy Twiston-Davies and Ryan Hatch, and then went straight to Nige’s.

We’ve been owners for more than 20 years and inevitably there have been some lows, including losing four horses in just 18 months at one time, and Cogry, who did so well for us, ending Ryan Hatch’s riding career when he fell at Cheltenham. But with Guard Your Dreams it’s been nearly all highs. He was second to a good horse [Bear Ghylls] in his bumper first time out and then won three of his first four races over hurdles before running eye-catching races from unfavourable standing starts in the Betfair Hurdle and Coral Cup. This season he missed the Tote Silver Trophy at Chepstow with a minor hiccup but then won a handicap at Cheltenham in course record time, and returned there to win the International Hurdle, when we feared the trip might be a bit sharp. He was a bit flat when he went back there for the Relkeel Hurdle, but it probably just came too soon.

He’s not entered for either the Champion Hurdle or Stayers’ Hurdle as we think he might be better suited by the two-and-a-half-mile Grade 1 at Aintree, where he was third to My Drogo in April. He’s won on heavy going, but that course record at Cheltenham shows he’s just as good on good ground.

We’ve been with Nigel since 2004 I think and we probably go there two or three times in the autumn, and then perhaps again if we are on our way from our home in Leicestershire to see  runner at Cheltenham. We get on well, and that’s perhaps because we are similar types. Neither of us says a lot, and we tend to be happy just to go with the flow. Nigel doesn’t wrap them in cotton wool and you have to learn to lose as well as to win, but that’s okay.

We are breeders too on a minute scale, with just one mare, and I don’t think we’d be looking to increase our involvement. We’ve got four with Nigel, plus a four-year-old store with Willy who we bought at Goffs. We also have one now with Fergal O’Brien out of our mare, with whom he won a bumper when we gave him a bit of support starting out. We don’t breed to sell, and she’s got a two-year-old by Kayf Tara and a yearling by Jack Hobbs coming through. It does help though to have one like Guard Your Dreams to help pay for those who are less successful. 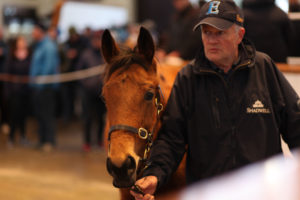