English King to be offered at Tattersalls’ Autumn Sale

Listed winner, owned by Bjorn Nielsen, will go through the ring a week on Wednesday

Bjorn Nielsen’s English King, winner of the Listed Lingfield Derby Trial, will be offered at next week’s Tattersalls Autumn Horses in Training Sale as a wildcard.

The son of Camelot became ante-post favourite for this year’s Investec Derby after his display in the Lingfield contest, where he was an easy two and three-quarter length winner from subsequent St Leger runner-up Berkshire Rocco.

At Epsom, the three-year-old could only manage fifth behind shock winner Serpentine and has since contested the Group 3 Gordon Stakes and Group 1 Grand Prix de Paris.

Boasting a classy pedigree, English King is out of the Zafonic mare Platonic, which makes him related to Pacifique and Prudenzia, the dam of top-level performers Magic Wand and Chicquita.

His trainer Ed Walker said: “I genuinely believe English King is the best horse I have ever trained and I will be very sorry to see him sold. He is an outstanding prospect for the future having only raced six times and has all the credentials to attract potential buyers from throughout the world.

“He is a horse who loves fast ground and like all top-class horses has the ability to quicken off a fast pace as demonstrated in the Derby where he had the fastest final three furlongs of all.” 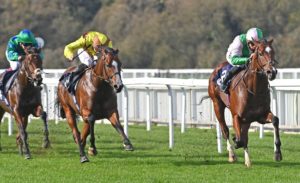