After the political shenanigans of recent months, I’m not sure that Britain still has any beloved elder statesmen but in the equine world Dubawi certainly fills that role. At the age of 20, Britain’s highest-priced stallion has reached some seemingly unattainable milestones, such as 51 individual Group 1 winners, plus over 100 other Group scorers, and by the time this appears in print he is likely to have passed the landmark of 350 individual black-type earners. Equineline credits him with 12 per cent black-type winners to named foals, or more than 15 per cent of his starters.

Yet it mustn’t be forgotten that Dubawi hasn’t always been so loved or respected. He briefly struggled for support in the early stages of his stallion career, despite his first-rate achievements on the racecourse, which included an unbeaten two-year-old campaign and a Classic success at three, when he also won the highly prestigious Prix Jacques le Marois.

Dubawi was priced at only £15,000 in his fourth year in 2009, having attracted no more than 91 mares in 2008, for a third crop of 78. Even that substantial reduction in his fee (from €40,000) didn’t have the desired effect, with Dubawi’s book falling further in 2009, to only 68, for a fourth crop of just 61 foals. I suspect that part of the problem was that quite a few breeders questioned whether the neat, muscular Dubawi possessed enough scope to develop into a top-class stallion, forgetting that the breed-shaping Northern Dancer stood only 15.2 hands.

No doubt many also found it hard to envisage Dubawi developing into a terrific sire of sires. This is a topic I have touched on before in this column, but the situation now looks so encouraging that an update is justified.

It must be said that he didn’t start particularly well in this role. Neither of his first-crop sons Makfi and Poet’s Voice could be described as a runaway success, despite each of them siring one top-class son. Makfi’s finest moments came via Make Believe, the Poule d’Essai des Poulains and Prix de la Foret winner who has sired the tremendously talented and versatile Mishriff.

It is going to be a recurring theme in this article that several members of the Dubawi male line have managed to shine despite comparatively small crops and Make Believe is no exception. His first four crops respectively numbered 88, 59, 45 and 53 foals but three first-crop two-year-old black-type winners earned him 107 mares in 2020 and then Mishriff’s Prix du Jockey-Club victory helped boost the numbers to more than 150 in 2021. By 2024, we should have a much clearer idea of whether Make Believe is going to help the Dubawi male line to flourish.

Unfortunately, Poet’s Voice’s best son, the champion middle-distance horse Poet’s Word, will find it hard to do so, as he was quickly transferred to the National Hunt sector after he attracted only 29 mares in his first season under the Shadwell banner.

The 2014 breeding season was to see three of Dubawi’s smart sons make their debut. Best of them was the excellent ten-furlong winner Al Kazeem, whose fee of £18,000 reflected victories in the Prince of Wales’s Stakes and Eclipse Stakes. Sadly, he was to experience fertility issues which resulted in a return to training – and ultimately a third Group 1 victory.

Although he later returned to stallion duties, Al Kazeem still has fewer than 100 progeny of racing age, but one of them – Aspetar – became a Group 1 winner, so Al Kazeem hasn’t let the side down.

The next high-profile son of Dubawi to retire to stud in Britain or Ireland was the 2014 2,000 Guineas winner Night Of Thunder. This conqueror of Kingman and Australia joined the team at Kildangan Stud at a fee of €30,000 in 2016. His retirement came just a few months after Makfi had enjoyed Classic success with Make Believe, so there was some cause for optimism about Dubawi as a sire of sires.

Breeders duly gave Night Of Thunder a warm welcome, sending him 138 mares. From then on, though, he became quite hard work for the Darley nominations team. A reduction in fee to €25,000 wasn’t enough to stop his book falling to 103 in his second season. A transfer to Dalham Hall Stud, coupled with a further fee reduction to £15,000, merely steadied the ship, with a third-season book of 102 and a fourth-year book of 97. Perhaps there were some doubts not only about Dubawi as a sire of sires but also about the strength of Night Of Thunder’s female line (he is the only Group winner under his first three dams).

I’m delighted to say that any such doubts were quickly dispelled. Night Of Thunder hadn’t been particularly precocious but he was impressive in winning two late-season juvenile starts and his first crop soon proved that he could pass on plenty of two-year-old ability. His first runners in 2019 yielded English-trained Group winners in England (Under The Stars), France (Pocket Square) and Italy (Night Colours), as well as four Listed winners spread throughout Europe. Two of those Listed winners went on to Group success at three, with Molatham taking the Group 3 Jersey Stakes and Thunderous winning the Group 2 Dante Stakes.

Night Of Thunder was moved back to Kildangan Stud for his fifth season in 2020 and the Darley team erred on the side of caution when they announced the 2020 fees in late-October. Although his fee was raised to €25,000, that was still €5,000 under his original fee. Two new Listed winners in November added fuel to the fire and demand for his services was enormous. He ended up covering 218 mares, so his current crop of yearlings is by far his largest.

In assessing Night Of Thunder’s merit, it mustn’t be overlooked that his first four crops numbered 105, 74, 83 and 69 foals, which currently puts him at quite a numerical disadvantage with some of his rivals. Fortunately, his progeny possess enough quality to offset any lack of numbers. Ignoring his five black-type winners sired on his excursions to Australia, Night Of Thunder has already sired 14 Group winners and 12 Listed winners from those 331 foals in his first four crops. That equates to a figure of nearly eight per cent black-type winners, and over four per cent Group winners, and these figures can be expected to rise.

Like Dubawi, Night Of Thunder has proved capable of siring good winners over a range of distances. At the short end are such as Suesa (King George Stakes), Highfield Princess (Duke of York Stakes) and Molatham (Jersey Stakes), while middle distances has brought out the best in such as Thundering Nights (Pretty Polly Stakes), Auyantepui (Oaks d’Italia), Thunderous (Dante Stakes), Thunder Kiss (Munster Oaks) and Sopran Basilea (Premio Lydia Tesio).

The chances are that the best is yet to come from the now 11-year-old stallion. In addition to his largest crop reaching the track in 2023, Night Of Thunder joined Ireland’s elite stallions in 2021 and 2022, with his fee rising to €75,000.

With Galileo as his broodmare sire, it isn’t surprising that several of his black-type winners have two lines of Sadler’s Wells. More significant is the fact that his recent Superlative Stakes winner Isaac Shelby and his Group 3 winner Thunder Kiss are both inbred 3 x 3 to Galileo. Isaac Shelby is one of those 69  foals in Night Of Thunder’s fourth crop.

There has also been a lot to like about the  first runners by some of Dubawi’s younger sons. The 2015 Prix du Jockey-Club winner New Bay has done so well that his fee was raised to €37,500 in his sixth season in 2022, even though it had been as low as €15,000 in his third and fourth seasons. He is credited with having covered more than 180 mares in 2021, but he hasn’t always received support proportionate to his impressive threeyear- old career, which included a second in the Poule d’Essai des Poulains and a third in the Arc. There were 77 foals in his first crop and 64 in his second, while his third crop numbers only 70 two-year-olds.

Of those 141 foals in his first two crops, no fewer than 17 – 12 per cent – have  earned a Racing Post rating between 100 and 124, with nine rated higher than 110. Thanks to Saffron Beach, Claymore and Bay Bridge, New Bay had a superb Royal Ascot. He is having the best year of his  young career, even though he had far fewer runners than most of the other stallions which ranked among the top 20 at July 18. With 68 runners in Britain and Ireland, he had the least number of runners, the only others with fewer than 100 runners being Churchill (74), Nathaniel (84) and Night Of Thunder (90). So that’s two under-supported sons of Dubawi in the top 15 stallions.

Three very smart sons covered their first mares in 2018 and two of them did so well with their first juveniles in 2021 that their fees were raised substantially, with Zarak’s going from €12,000 to €25,000 and Time Test’s from £8,500 to £15,000. The exception was Postponed, whose tally of four middle-distance Group 1 victories wasn’t enough to earn him the wholehearted support of breeders. After a first crop of 79 foals, he has only 28 two-year-olds in his second.

Breeding rights to Time Test sold for up to 115,000gns over the winter, so he’s another to keep an eye on in a few more years. There is no need to wait, though, for Zarak, who had shares sold for €350,000 and €380,000. Both Time Test and Zarak are out of Group 1-winning dams, but describing Zarak’s dam, Zarkava, merely as a Group 1 winner barely does her justice. None of her five Group 1 successes was gained by less than two lengths, including her Arc triumph.

By July 18, Zarak had had only 38 runners in France in 2022, but 24 of them had won and among them were Baiykara, who won the Prix de Royaumont in such style that she was spoken of as an Arc contender. Another daughter, Times Square, had finished a close third in the Poule d’Essai des Pouliches and there was another near miss at Classic level when La Parisienne narrowly failed to wear down Nashwa in the Prix de Diane. Also advertising the merits of Zarak’s daughters was Purplepay, the €2 million filly who comfortably landed the Prix de Sandringham.

Zarak’s sons have also played their part, with Haya Zark and Zagrey both winning at Listed level, while Lavello earned a tilt at the Deutsches Derby with his victory in the Bavarian Classic and a third in the Prix Hocquart.

The very eye-catching starts made by Zarak and New Bay are powerful reminders that Dubawi’s reputation as a sire of sires isn’t dependent on his faster sons, such as Night Of Thunder. Zarak’s finest win came in the Grand Prix de Saint-Cloud over a mile and a half, and New Bay also won over that distance, in the Prix Niel.

It is fair to expect a variety of other sons of Dubawi to add further gloss to his  burgeoning record as a sire of sires. Ghaiyyath – officially recognised as Dubawi’s most talented son – represents the same Dubawi-Galileo cross as Night Of Thunder and he started his stallion career with a book of more than 130 mares in 2021. Don’t forget that Ghaiyyath’s record also includes a two-year-old victory in the Autumn Stakes, a race later won by Coroebus before his transformation into this year’s winner of the 2,000 Guineas and St James’s Palace Stakes. No doubt Coroebus will eventually join Darley’s already-powerful team of Dubawi stallions.

Too Darn Hot can be expected to make a considerable impact with his blue-blooded first crop at the 2022 yearling sales, and breeders with smaller budgets are surely making the most of Space Blues, who used his excellent finishing speed to win three Group 1 races, including the Breeders’ Cup Mile Godolphin also have two other highly accomplished Dubawi colts which could be added to the team. Naval Crown has claims to being one of his sire’s fastest sons, following his win in the Platinum Jubilee Stakes and his second in the July Cup, and Modern Games has the attraction of being a Classic winner over a mile. 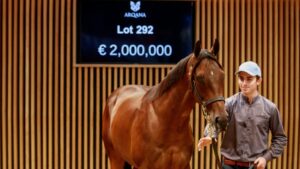 Up Next
Landmark celebrations as Arqana breaks €50 million barrier