Fakir D’Oudairies gained a deserved Grade 1 success in the Marsh Chase to highlight the second day of Aintree’s Grand National meeting on Friday.

The Joseph O’Brien-trained gelding has held his form well this year, running second in both the Dublin Chase and Ryanair Chase prior to Friday’s Aintree assault, and was impressive in victory on this occasion, scooting clear to win by 11 lengths.

In behind, it got messy for the runner-up Nuts Well, who found himself as the meat in the sandwich under Danny McMenamin between the weakening pace-setter Master Tommytucker and Politologue as they approached the second last.

McMenamin was forced to pull round, by which stage Fakir D’Oudairies had swooped down the outside and kicked clear. Nuts Well stayed on for second, a length-and-a-quarter clear of the third Itchy Feet.

“We went a good gallop and I was happy with him,” jockey Mark Walsh told ITV Racing. “I spoke to Joseph [O’Brien] earlier and he said ride him with a bit of light and he’ll jump better. And he jumped great.

“He deserves his day in the sun as he’s been running well all year.”

Easy for Chantry House after Espoir crashes out

Chantry House followed up his win in the Marsh Novices’ Chase at the Cheltenham Festival with an easy score in the Betway Mildmay Novices’ Chase to provide the opening leg of a Grade 1 double for owner JP McManus, later on the mark courtesy of Fakir D’Oudairies.

There was no hiding place early on as Espoir De Romay cut out a strong pace amid a bold round of jumping under David Bass. Sporting John was pulled up as the field headed out on their second circuit while The Big Getaway and Empire Steel called it a day down the back straight.

Meanwhile, the relentless Espoir De Romay had fought off Shan Blue and still had the advantage over Chantry House when he crashed out at the second last; had he stood up, he may well have prevailed.

As it was, that left the race at the mercy of Chantry House and he went on to saunter clear for a 32-length win over Shan Blue. 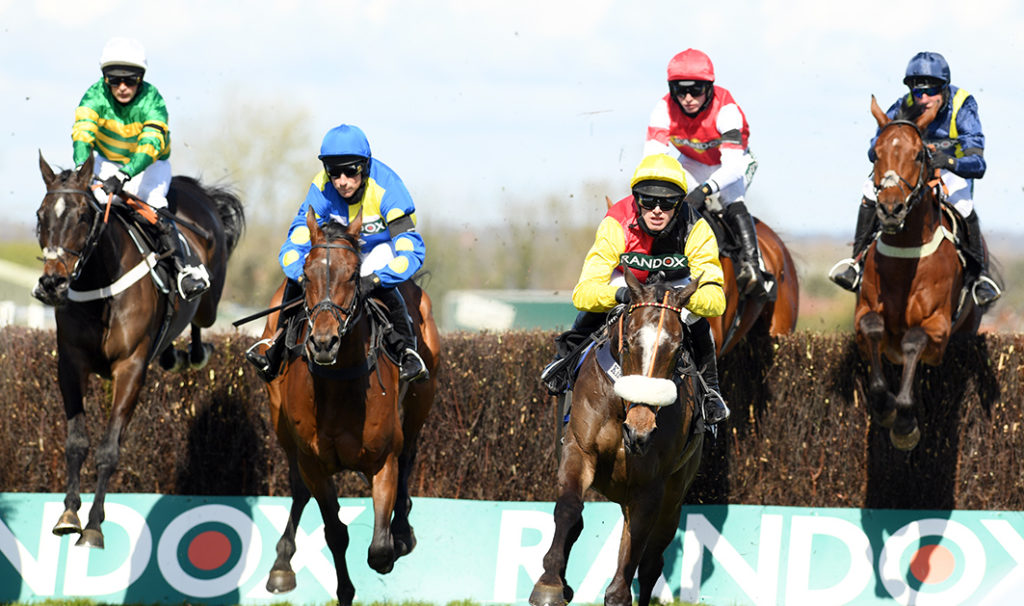 Chantry House (green) and Nico de Boinville jump behind the leaders before going on to win the Mildmay Novices’ Chase – Photo: Bill Selwyn

Jockey Nico de Boinville wouldn’t be drawn into whether his mount would have had the edge over Espoir De Romay under different circumstances but was thrilled with the effort nevertheless.

“It was a tremendous run,” he told ITV Racing. “It shows that he stays a strongly-run three miles on a flat track. He’s done really well to back up the Cheltenham form.”

By Coolmore’s Yeats, Chantry House was bred by the Conaghan family of Evergreen Stud in County Limerick out of their excellent mare The Last Bank. In addition to Chantry House, the daughter of Phardante has also foaled the Grade 2-placed On The Shannon and Grade 3-placed Linnel.

Grade 1 breakthrough for Fahey and Sexton

County Handicap Hurdle winner Belfast Banter took the step into Grade 1 company in his stride to capture the Betway Top Novices Hurdle and hand his connections, trainer Peter Fahey and jockey Kevin Sexton, a first winner at the top level.

For Pleasure assumed his customary bold place at the head of affairs, setting a strong gallop that ultimately played into the hands of Sexton and his strong travelling partner.

The winner could be spotted travelling ominously well in behind the leaders as they approached the second last and after taking it up over the last, always had enough in reserve to repel the persistent Do Your Job by a length-and-a-quarter. The favourite Dusart was another length-and-a-quarter away in third, having run green throughout.

“It’s unbelievable,” Sexton told ITV Racing. “It’s what you dream about – I’ve got the Cheltenham winner, but I always wanted a Grade 1 winner and I can’t believe it has happened.

“He travelled and jumped and got there too soon. He got there so easily, I couldn’t believe it, and then he just stuck his head and galloped all the way to the line.”

Yet another Grade 1 winner by the much-missed Jeremy, six-year-old Belfast Banter was bred by Seamus Cooney out of Sumtin Nice, an unplaced Simply Great half-sister to Thyestes Chase hero Dun Doire.

Ahoy Senor made every yard a winning one to spring a 66-1 shock in the Doom Bar Sefton Novices’ Hurdle for Lucinda Russell.

The son of Dylan Thomas came into the race having broken his maiden over hurdles at Ayr last month, but that form was well removed from that shown by the favourite Bravemansgame, the Challow Hurdle winner who had run third in the Ballymore Novices’ Hurdle at the Cheltenham Festival.

Bravemansgame did indeed loom as a major threat in the closing stages but he had no answer to Ahoy Senor, who pulled out more under Derek Fox to win by seven lengths. 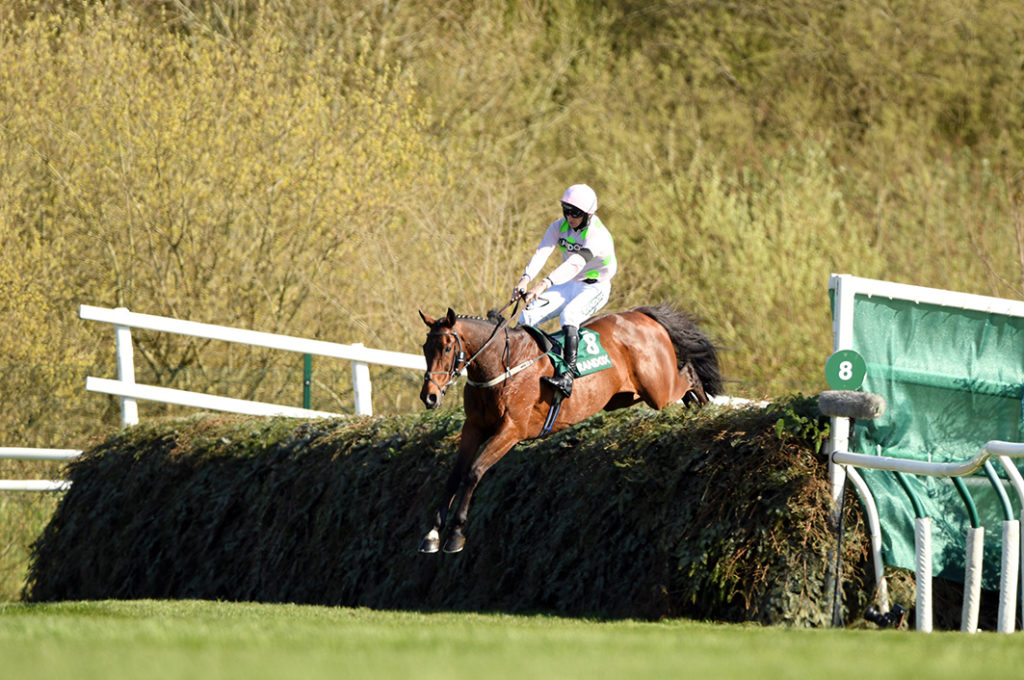 Patrick Mullins and Livelovelaugh lead over the Canal Turn before recording a resounding win in the Randox Topham Chase on Friday – Photo: Bill Selwyn

You will seldom see an easier winner over the Grand National fences than Livelovelaugh, who routed his opposition to win in the Topham Chase for Willie and Patrick Mullins on Friday.

Having made most of the running in the early stages and clearly travelling the best, Mullins elected to kick clear approaching the Canal Turn. The advantage the pair had built up was significant and as they crossed the Melling Road for the final time, it looked like they would not be caught.

The David Brace-trained Pink Eyed Pedro had made eye-catching progress to rally to challenge at the final fence but as they battled towards the elbow, Livelovelaugh found another burst to pull clear to win by four and a half lengths.

The winning jockey said: “He jumped spectacularly today – Danny Mullins got a great spin off him in the National one year – and I just didn’t want to take that away as he was enjoying himself so much. It was a fantastic performance.

“When I had a look behind me at the Melling Road I got a fright at how far clear I was and I couldn’t hear anything, so we were a bit far clear. It’s indescribable and I feel sorry for anyone who doesn’t get to experience riding a horse over these fences. I’m lucky to have experienced it.” 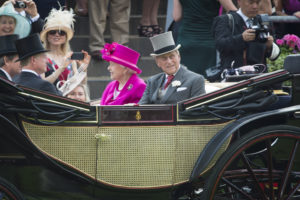 Up Next
Prince Philip dies aged 99