The son of Cape Cross has been headed just once in his eight starts, when beaten by Arabian Queen in the Juddmonte International and his otherwise spotless racing career may not be over yet, with a potential run in the Breeders’ Cup Turf at Keeneland currently under consideration by his connections.

Bred at Hascombe and Valiant Studs just outside Newmarket, Golden Horn started his dazzling run by winning a Nottingham maiden on October 29 last year. Behind him that day in second was Storm The Stars, who would subsequently finish third to him in the Derby.

Oppenheimer will retain a 50% interest in his homebred colt, whose sire stands at Darley’s Irish base at Kildangan Stud.

Commenting on Darley’s high-profile recruit, who will join 2,000 Guineas winner Night Of Thunder, Outstrip, French Navy, Hunter’s Light and Fulbright as new names on the 2016 roster, Sam Bullard, Director of Stallions, said: “It is wonderful that Darley has bought into this great Champion and we are thrilled that Mr Oppenheimer has decided that Dalham Hall Stud is where Golden Horn will get the best opportunity of becoming the great stallion we believe he can be.” 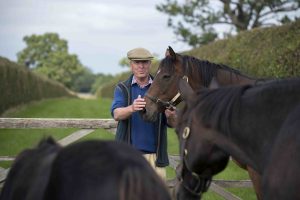 Up Next
RCA could split over Members’ Agreement