Although frequently dominated by Ballydoyle, the 2015/16 Flat season has produced memorable moments for others including Clive Cox. My Dream Boat gave the Lambourn-based trainer the second part of a Group 1 double at Royal Ascot, and will bid to add another Group 1 to his trainer’s roster in the Champion Stakes at Ascot on Saturday.

A son of Lord Shanakill, My Dream Boat has become one of the bargains of the season. A €16,000 yearling purchase, he was re-sold as a two-year-old for €40,000 to Bloodstock Agent Tom Malone and Donald McCain.

After climbing through the handicap ranks as a three-year-old, his four-year-old campaign has bloomed in no uncertain terms. He has rewarded owners Paul and Clare Rooney spectacularly, accruing just shy of £600,000 in prize money, most of which has been earned this season.

Twelve months ago, My Dream Boat was rated 21lbs below his current rating. His first start of the season in the Group 3 Gordon Richards Stakes at Sandown, saw him step up to ten furlongs. He displayed a potent turn of foot at the finish, beating John Gosden’s Western Hymn.

Although disappointing in the Group 1 Prix D’Ispahan behind impressive Japanese raider A Shin Hikari, he was to notch his first Group 1 against that rival in the Prince of Wales’s Stakes on the second day of Royal Ascot.

Kirby delivered his charge from the back of the field with a strong run in the final furlong. The colt denied none other than recent Arc heroine Found, by half-a-length in prevailing soft conditions.

“We realised last year that he didn’t enjoy too firm a surface,” said Cox. “We’ve campaigned him with the knowledge that he needs to run on the right sort of ground and he’s improved for stepping up in trip and has confirmed his promise throughout the season.”

He was unable to land a blow in the Coral Eclipse back at Sandown in July, but two months later at Leopardstown belied his hefty odds of 33/1 to run a creditable fifth behind Jean-Claude Rouget’s Almanzor in the Irish Champion Stakes.

In what has been widely regarded as one of the hottest races of the season, My Dream Boat stayed on well in the closing stages to finish only five lengths off the front pair.

Cox said: “I would say it was a very hot race and he ran very pleasingly there. I’ve been happy and pleased with his progress and well-being since the Irish Champion.”

He continued: “We’re a big price but equally it’s a very highly subscribed competitive race as you would expect, but on a track that he’s probably produced his best result ever so far, we are really looking forward to Ascot on Saturday.”

I’ve been happy and pleased with his progress

Out of Betty Burke, a six furlong winning mare, he is likely to face the two horses who were in front of him in Ireland – French Derby-winner Almanzor and Found – in what is shaping up to be an excellent renewal of the Champion Stakes.

Last year’s winner Fascinating Rock is likely to reappear, while former Derby runner-up Jack Hobbs is due to make his comeback from a stress fracture he picked up in the spring.

Although forecast’s earlier in the week suggested there may be rain close to or on the day, only five millimetres are expected between now and the weekend.

In light of this, officials at Ascot have switched the feature race back to the outer course after initially intending to run it on the inner course in fear of deteriorating conditions.  The going on the outer track on Wednesday afternoon is good, good to soft in places. 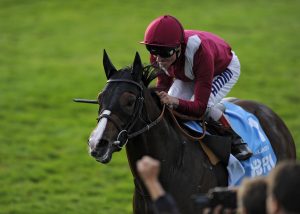