Belardo was a Group 1 winner at two and four

The highest-rated son of Lope De Vega – Belardo – has been retired to stud after suffering a minor setback while in preparation for a second crack at the Group 1 QEII Stakes on Champions’ Day at Ascot on Saturday.

With an official rating of 119, the four-year-old colt was only three quarters of a length behind the Freddie Head-trained Solow in last year’s renewal of the mile contest.

Roger Varian’s star miler was European champion two-year-old in 2014 after his win the Group 1 Dewhurst Stakes at Newmarket in the autumn.

Outside his excellent run in the QEII his three-year-old campaign hardly set off fireworks. However, this season he was two from four, his penultimate effort arguably his very best when he secured the Group 1 Lockinge Stakes at Newbury.

He showed an eye-catching turn of foot in the closing stages to win a race which has been won by the likes of Medicean, Hawk Wing and Frankel.

A €100,000 yearling, his final racecourse appearance came at Royal Ascot in June. He only went down half-a-length in the Queen Anne Stakes to one of America’s finest female exports in the shape of Tepin who was winning the race for Mark Casse.

“The timing of this setback is very unfortunate and I am disappointed for both Prince Faisal and Sheikh Mohammed that Belardo will not be able to run at Ascot on Saturday,” said Varian.

He continued: “The horse had been working exceptionally well in the build up to this race. However, he was not 100 percent following his last piece of work and we now do not have sufficient time to get him to the QEII. As such, connections have taken the decision to retire him.”

Belardo will stand next year at Darley’s Irish operation in Kildangan Stud, County Kildare. He will be joining a roster which includes the likes of Dawn Approach, Epaulette, Cape Cross and his very own grand sire, Shamardal.

Sam Bullard, Darley’s Director of Stallions said: “We’re thrilled to be standing one of the most exciting stallions to retire in 2016. From our own Shamardal sire line, it is no wonder that the 40 lifetime breeding rights sold out straight away to some of Europe’s top breeders.

“He gives breeders the opportunity to breed a precocious two-year-old as well as live Classic prospects.” 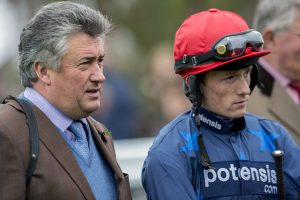 Up Next
Bandit charges to Persian triumph