Much had been made of Ireland’s dominance over Britain at the Cheltenham Festival but the roles were reversed as Clan Des Obeaux struck in the Irish Gold Cup at Punchestown on Wednesday.

Paul Nicholls’ charge, who was last seen winning the Betway Bowl at Aintree earlier this month, made the running under jockey Sam Twiston-Davies and still held the advantage at the penultimate fence over Al Boum Photo.

Smooth swift jumps kept the two-time Gold Cup winner at bay as Clan Des Obeaux galloped up the run-in, winning by one and a half lengths, with 17 lengths back to Fakir D’oudairies in third.

Harry Derham, assistant trainer to Nicholls, said: “He was very, very brave. Paul and Sam discussed it and said they’d ride him exactly how they did at Aintree – he obviously likes being up near the front. Turning off the last bend, we had to be brave and send him on and Sam rode a fantastic race.

“It’s gutting for Harry Cobden, fair play to him, he was the man who wanted the cheekpieces on. He was getting a little bit idle going to the last, but they looked like they went a really honest gallop the whole way and he probably just needed a bit of company. It was hard watching it for the last 100 yards. He did well to hold on.”

Twiston-Davies added: “Harry Cobden normally rides this horse – he has my job now – but it is great to still have a relationship with the yard and I can only thank them all for producing the horse in great shape today.

“A Punchestown Gold Cup, it’s the stuff that dreams are made of to come over here and do it like that.”

While Willie Mullins fell short in the Irish Gold Cup with Al Boum Photo, he does look to have an exciting staying hurdler on his hands in the shape of Galopin Des Champs, who won the Grade 1 Irish Mirror Novice Hurdle earlier on Punchestown’s card.

That was one of a trio of winners for the trainer as Kilcruit reversed form with Sir Gerhard from last month’s Champion Bumper at Cheltenham as the latter could only finish third behind Kilcruit in the Champion INH Flat race.

The treble was rounded out when Grangee captured the Grade 3 Irish EBF Mares INH Flat race that closed Wednesday’s card. 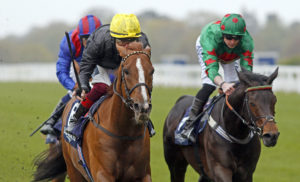