Keeneland off the mark
Stories

By The Owner Breeder staff 15 September 2012

Godolphin’s love affair with Britain’s oldest Classic continued when Encke sprang a 25/1 shock in the St Leger on Saturday, denying Camelot the Triple Crown by just three-quarters of a length.

The Aidan O’Brien-trained 2,000 Guineas, Derby and Irish Derby winner travelled well through most of the race towards the rear of the field but when switched through a gap and asked to quicken in his attempt to become the first colt to win all three British Classics for 42 years, he didn’t respond instantly to the urgings of Joseph O’Brien.

Encke, ridden by Mickael Barzalona, who was having his first ride in the St Leger, had first run and, despite Camelot finally getting into his stride and closing him down on the way to the line, he had done enough to follow in the footsteps of Classic Cliche (1995), Nedawi (1998), Mutafaweq (1999), Rule Of Law (2004) and Mastery (2009) – all fellow winners of the race in the Godolphin blue.

Sheikh Mohammed has also seen his own maroon and white colours carried to glory on three separate occasions by Shantou, Moonax and Oh So Sharp, who won the fillies’ Triple Crown in 1985.

His racing manager Simon Crisford said after Encke’s win: “We are probably not going to be the most popular winner on Town Moor today but from our point of view it was a fantastic result, giving Godolphin its sixth St Leger success.

“Mickael Barzalona has given the horse a superb ride and put the race to bed when he kicked on at the two-furlong pole. There was a question about Encke’s stamina, but in the end he has stayed it well.”

Referring to their spoiling of a sporting Triple Crown attempt by the Coolmore team, he added: “We may be party poopers today but on this occasion we are happy to be party poopers. It is fantastic result for the whole team involved with the horse.”

Aidan O’Brien, who had won all four British Classics up to the St Leger courtesy of Camelot’s Double and the victories of Homecoming Queen and Was in the Irish 1,000 Guineas and Oaks, said: “Joseph had to take his time down the straight and wait for the gaps to come, which you would do with Camelot anyway. When the gaps came, the winner was in probably a handier position and was gone. When Camelot got out, he just stayed on rather than quickened up. He quickened up in the Guineas and the Derby but that was always liable to happen because we were running him a bit further than his distance.

“My regret is that I should have run a pacemaker or two and it would have made it a little bit more straightforward because that means he would have settled a little bit earlier, a little bit better and he might have quickened a bit more than he did.

“That’s the way it is and well done to the winner.”

Only 15 colts have won the Triple Crown, the most recent being Nijinsky in 1970. Camelot becomes the tenth to win the first two legs and lose the St Leger. Illustrating how infrequently the challenge is attempted, the last horse to fail in a Triple Crown bid before 2012 was Cameronian in 1931. 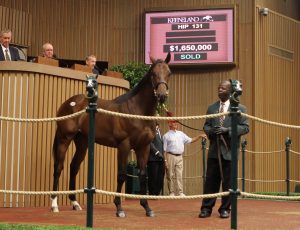 Up Next
Keeneland off the mark