Keeneland off the mark

By The Owner Breeder staff 11 September 2012

With two more seven-figure lots than last year’s two-day Book 1, Keeneland’s September Sale has certainly started with some notable highlights but with only 75 of the 132 yearlings catalogued for the select session changing hands, vendors in Lexington will be hoping that it was more a case of first-night nerves than a trend set to continue through to Book 6.

The penultimate lot of Book , a son of Distorted Humor, topped the session at $1.65 million (Photo by Z)

The range of top-end buyers will have been heartening for the Keeneland executive, with Sheikh Hamdan securing the top lot, a $1.65 million colt by Distorted Humor out of Grade 1 Spinster Stakes winner Mushka (Empire Maker). His Shadwell operation also signed for another colt by the same sire out of the My Miss Storm Cat for $850,000.

Smart Strike, whose best daughters include the Grade 1 winners My Miss Aurelia, Never Retreat and Shadow Cast, was responsible for the best-selling filly in Book 1, though as a half-sister to this season’s Kentucky Derby and Preakness Stakes runner-up Bodemeister it was no surprise to see January-foaled filly sell for $1.3 million to John Sikura and Bruce Lunsford after a bidding duel with Japanese interests. She will be trained, like Bodemeister, by Bob Baffert.

Despite missing out on this prized lot, the Japanese contingent at Keeneland will not be going home empty-handed. K K Eishindo wen to $675,000 for an Irish-bred Sea The Stars colt out of Ice Mint from the inaugural Keeneland September consignment of Eamon Cleary’s Clearsky Farms. He also bid $500,000 for a Tiznow half-brother to this year’s Garden City Stakes winner Winter Memories out of the Beverly D winner Memories Of Silver, while Eishindo’s compatriot Hajime Sotomi paid $475,000 for a Medaglia d’Oro half-sister to Frizette Stakes winner Sky Diva.

Shadwell Estate Co ended the session as leading buyer, with four yearlings purchased for $3.8 million, while Whisper Hill Farm spent $2.25 million on two fillies and a colt, including a final-crop daughter of the great A. P. Indy out of Grade 3 winner Moonlight Sonata, who was the third-highest price of the session at $1.1 million.

Book 2, which is held over three days, begins at 4pm local time on Tuesday, September 11. 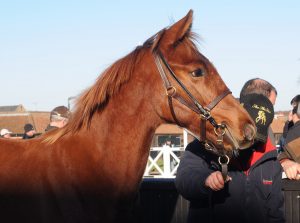 Up Next
Crimborne graduates secure double