No 2014 fixtures for Great Leighs
Stories

Echoing a format so popular in France, British National Hunt breeders are being encouraged by the TBA to support the inaugural ‘Stars of Tomorrow’ Show at Bangor on Tuesday, July 23.

The great Sprinter Sacre is just one famous name to have emerged from such a show in the French jumps breeding heartland and it is hoped that this new initiative will gain popularity in Britain, too.

“In this, our first year, we hope to attract a sufficient number of quality young stock, supported by National Hunt members,” said National Hunt Committee Chairman Robert Waley-Cohen. “We very much hope this will become an annual event, to compliment the other initiatives we organise to support the British National Hunt breeding industry.”

The show includes separate classes for colts and fillies, who are shown alongside their dams. Only the foals are judged by a panel of experienced figures from Britain, Ireland and France, including Malcolm Jefferson, Will Kinsey, Grant Lewis, Frannie Woods, Ian Ferguson and Pascal Noue.

Entry to the show, which is held at Bangor-on-Dee Racecourse from 12 noon, is free to TBA members on production of a membership card. Activities in the ring will be followed by a barbecue and evening racing, which includes TBA sponsorship.

To download an entry form for the show, please click here. Entries must be received by Monday, July 8. 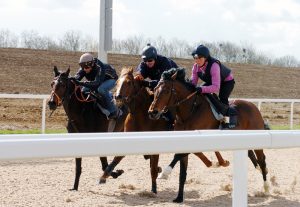 Up Next
No 2014 fixtures for Great Leighs