Two-year-old will now continue his career in Qatar

Will Douglass of Charlie Gordon-Watson Bloodstock signed for the top lot at the first day of the Tattersalls August Sale on Tuesday in the shape of 125,000gns two-year-old Bunglejungleparty.

Offered by Jamie Railton Bloodstock on behalf of owner Theresa Marnane, the colt has plied his trade in France thus far and has run a total of three times with his best effort coming on his latest start where he was third in the Listed Prix des Jouvenceaux et des Jovencelles.

Speaking after signing the docket, Douglass said: “I have had luck buying from these connections at last year’s sale with Pom Malpic. This is just a very nice horse with form. He goes to Qatar.

Railton added: “The Marnanes are such enthusiasts, I am so pleased for them. We are so appreciative of our Qatari bidders. He was a pretty obvious horse, and he had an avenue to the US as well as he is a non-winner.

“We are so appreciative of all these people coming to Tattersalls to buy horses. This sale suits every single jurisdiction in the world to buy horses so we must strive to support it.”

Con Marnane, who had bought the youngster as a yearling for €12,000, was also on hand at Park Paddocks to see the result and added: “I am over the moon. He is a very good-looking horse, big and strong, everybody wanted him today. He had clean x-rays and a very good scope, and there were three people on him over 100,000gns.

“We rolled the dice here! He was entered in a Group 3 in Germany this weekend, but the yearling sales are coming up. We sold Will a very good horse last year, who has been stakes placed in Qatar; he knows where to get the good ones from!”

The winning Encourage, who was bred and raced by the Queen, will continue his career in Bahrain having been bought by HE Sultan Aldeen MS Al-Khalifa for 75,000gns.

A three-year-old son of Iffraaj, he will enter the care of Ali Majeed and the trainer added: “He is a little under the handicap mark, but we think he will go well in Bahrain and hopefully he will improve.

“He is for Sheikh Sultan, and we are looking forward to running him. Sometimes we buy a nice horse and sometimes we don’t! We hope this will be a nice horse!” 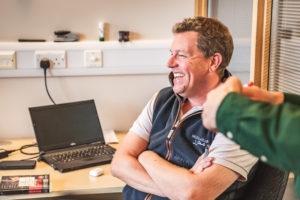