Richard Brown in clover with Ardad and Perfect Power’s success

For Blandford Bloodstock’s Richard Brown, Perfect Power’s Prix Morny success on Sunday provided him with a deep sense of satisfaction having sourced the Group 1 winner and his sire, Ardad, from the Goffs UK Breeze-Up Sale in 2016 and 2021 respectively.

Having already matched Ardad by winning as a two-year-old at Royal Ascot, the juvenile’s French raid saw him become the first top-level performer for the first-season sire who stands at Overbury Stud in Gloucestershire.

Reflecting on the colt’s performance, Brown said: “It’s what we all get up in the morning, go to sales and buy horses for it. Those are championship races and when you’re fortunate to buy a horse that can go and win a Morny, you enjoy it.

“It’s ten years on from Dream Ahead and I think that first time around I probably didn’t enjoy it enough when it was happening, but I’m not going to make this mistake this time.

“We got away with 5f at Ascot – that’s how I’d put it. He just got up on the line [in the Norfolk Stakes] and the form worked out very well as Go Bears Go went and won the Railway Stakes in Ireland. But we knew 6f was going to be far more up his alley.

“When you’re fortunate to buy a horse that can go and win a Morny, you enjoy it”

“He went to the Richmond with a penalty and that looked a pretty deep race. He was fifth but had absolutely no luck in running and look, it’s one of those things that happens, it’s racing.

“He ended up fifth beaten by not very far and I’m pretty certain that we all felt with a clear run he would have won that. That gave us a lot of confidence but were we confident going into the Morny? No, because you’re involved with so many horses that you think might win that don’t and especially when you’re in a championship race.

“The belief was there but of course they have to go and do it and he did it very well.”

Back in 2016, Brown sourced Ardad on behalf of Abdullah Saeed Al Naboodah from the Tally-Ho Stud draft at the Goffs UK Breeze-Up Sale for £170,000.

Entrusted into the care of John Gosden, the son of Kodiac won on debut before cruising to a three and a quarter length victory in the Listed Windsor Castle Stakes. Another success was to follow as a juvenile in the September of that year when he added the Group 2 Flying Childers Stakes. 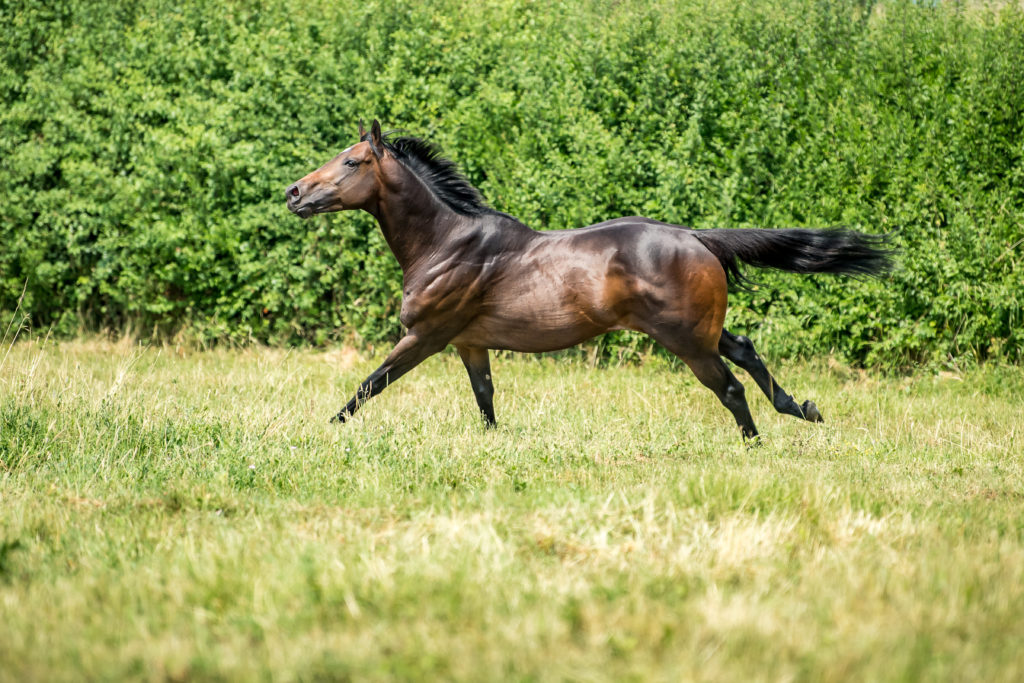 When asked what it was about Ardad that stood out five years ago at Doncaster, Brown revealed it was the colt’s temperament.

He added: “We get asked about breeze-up sales quite a lot and everybody wants to talk about times and stride patterns – all these things are important, there’s no doubt.

“For anybody that says times aren’t important, I’d sit and show them the evidence to show them they are important and at the end of the day, we’re in the business of finding out which horse is fastest.

“It is important but I would say nearly the number one component that we look for in a breeze-up horse is temperament because it’s a huge ask asking these horses to do what they do.

“Ardad had the most chilled out temperament. So much so that I was in John’s about ten days later [after the purchase] and he said ‘you better come and have a look at this colt, he’s just standing in the back of his box with his head on the ground.’

“I went and looked over and he was asleep. I actually called Roger O’Callaghan and said: ‘Is this horse alright, is he always like this?’ he said ‘Yeah, he’s just completely chilled’ and he was exactly that.

“He was [a] totally chilled character. I don’t think he ever saw a vet at John’s, he never caused a problem.”

Five years later, Brown returned to the Goffs UK sales complex in April and cast his eye over the future Group 1 winner Perfect Power who like his sire, was being offered by Tally-Ho Stud.

Out of the winning Frozen Power mare Sagely, the colt counted the likes of Sagamix and Sagacity further down his page and was snapped up by Brown for £110,000.

The likeness to his sire was uncanny according to Brown and he said: “Even when watching him outside before, I remember very clearly Ardad, and it felt like déjà vu, it really did. 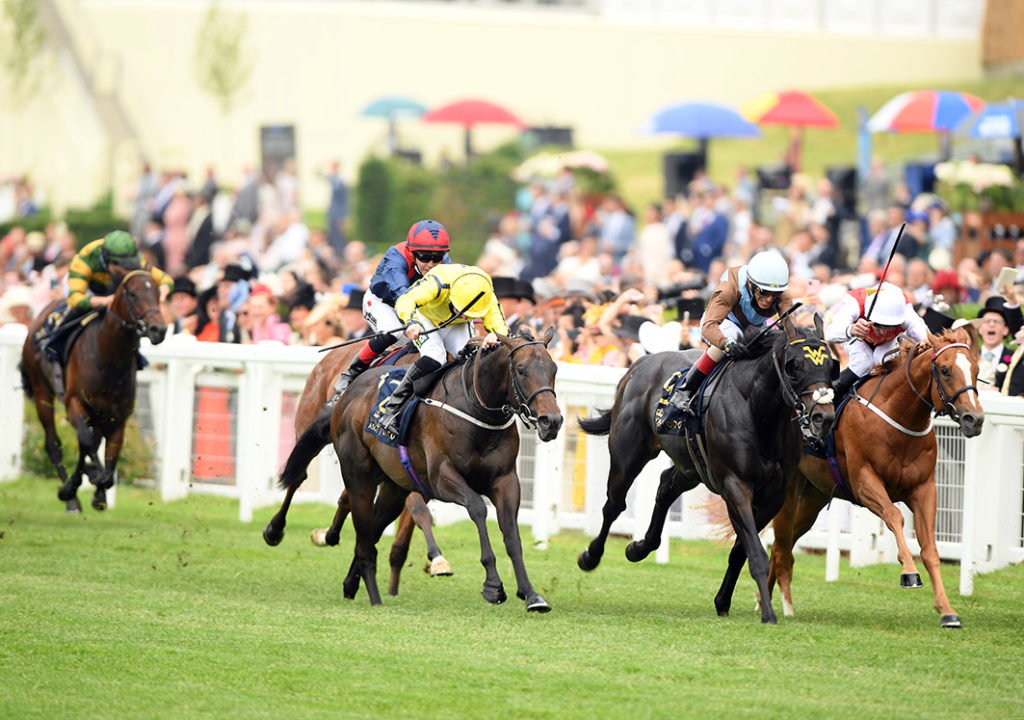 Perfect Power (yellow) and Paul Hanagan get up late to win the Norfolk Stakes at Royal Ascot – Photo: Bill Selwyn

“We were very, very keen to buy him. Sheikh Rashid and I spoke in the morning about focusing just in one or two horses and which is exactly what we did. He was a horse that we were going to try very hard to buy.”

Since then, Ardad’s stock has continued to rise higher and higher with a wealth of mares booked into him during the middle of the covering season off the back of the strong performances of his early runners.

Brown reports that the son of Kodiac covered around 140 mares which means that a couple of years down the line he will have a very exciting crop to run for him. However, he did not envisage Ardad’s stallion career starting quite as well as it has done.

He added: “This year would be his best group quality wise because people could see that he was getting early winners, then see they had a bit of class, and so some very bright people have quite a lot of mares in foal to them.

“If you’d said to me, he’d have the highest rated two-year-old on RPRs so far, in January or February it would have been a dream.

“He started fast, had a bunch of winners which was great. Like any stallion, winners isn’t enough, you’ve got to throw a class horse, and he has thrown four or five stakes calibre animals. Now he’s thrown a top-class colt it obviously moves him into a different level.

“Even when watching him outside before, I remember very clearly Ardad, and it felt like déjà vu”

“Could you expect it? Of course, you couldn’t but the fact that he’s done it now I think there’s been a lot of interest. There’s been a lot of questions about stud fees and all the rest of it, but we won’t be making those decisions until after the October sales.”

Plans call for the Richard Fahey-trained Perfect Power to head to the Middle Park Stakes next but Brown is still basking with delight in having sourced Sheikh Rashid Dalmook Al Maktoum’s first Group 1 winner and the role he’s played with Ardad for Al Naboodah.

He said: “I bought Ardad for Abdullah Al Naboodah who again like Sheikh Rashid has been a big supporter of ours and trusted us to buy a lot of horses for them. I’ve taken a very active role from the start with Ardad in terms of we sold a lot of breeding rights, and we got a lot of breeders involved and we made it a very attractive proposition. So, there’s over 40 breeding rights out there in Ardad.

“There’s a lot of my friends and business associates, people in the industry who I might have twisted their arm at the time and know I think they’re fairly happy they did that are involved with this story.

“So, it’s fantastic because it’s a double whammy – you’re absolutely delighted that you’ve bought a Morny winner for a guy like Sheikh Rashid but then you’ve also got Abdullah Al Naboodah who’s also delighted. It’s like winning twice.

“Just very, very lucky that we are able to do business for these guys because they’re great people, they put enormous trust in me and it’s nice to repay it.” 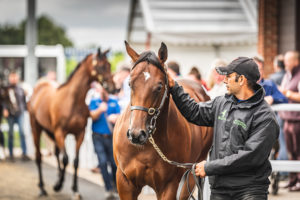 Up Next
Premier Yearling Sale topped by £220,000 son of Harry Angel