Bryony Frost’s upward trajectory continued at Kempton on Monday as the jockey enjoyed her 75th victory under rules on the Neil King-trained Marienstar.

The triumph saw her become only the second female in Britain to have ridden out their claim, joining Lucy Alexander, champion conditional in 2012-13, in the history books.

Frost said: “I’m a professional now – crikey! I’m not quite sure what to think. It’s now a bit of a daunting time but I’ve got my trainers, Paul Nicholls and Neil King, behind me.

From the archives: The life of Bryony

“When you have those sorts of teams behind you, they fill you with confidence.”

Marienstar and Frost hit the front from the off in the Weatherbys General Stud Book Mares’ Handicap Chase, run over an extended two and a half miles. The pair had their rivals in trouble before turning for home and once entering the straight, pulled clear to eventually win by an impressive 22 lengths.

Frost continued: “What a girl she is and our only worrying part was trying to get in front at the start. She jumped from fence to fence.”

Monday’s success came two days after Frost had partnered the Nicholls-trained pair of Capeland and Present Man to victory at Wincanton on Saturday.

The win aboard Present Man was notable as Frost and the eight-year-old son of Presenting combined to become the first back-to-back winners of the Badger Ales Trophy since Swansea Bay’s triumphs in 2002 and 2003.

It was fitting that her latest success came at Kempton Park, the scene of her Grade 1 strike on the Paul Nicholls-trained Black Corton in the Kauto Star Novices’ Chase in December 2017.

Frost added: “I drove in today and thought this is the place where I’ve had some of the best days of my life. Black Corton is one of the highlights and this track has definitely got a great place in my heart.” 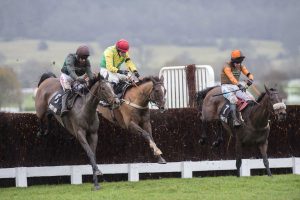 Up Next
Mister Whitaker ready for next step