Mister Whitaker ready for next step

Mister Whitaker has been a revelation for trainer Mick Channon and the team at West Ilsey stables are hoping to discover how much of a superstar he could be in Saturday’s Grade 3 BetVictor Gold Cup at Cheltenham.

The six-year-old recorded the biggest victory of his career at the Cheltenham Festival in March when getting the better of Rather Be by a head in the Listed Close Brothers Novices’ Handicap Chase.

His first appearance this season came at Carlisle earlier this month when he was an impressive two and quarter length winner in a Listed 2m4f handicap chase.

The son of Court Cave will face his old foe Rather Be in the BetVictor Gold Cup and Jack Channon, assistant trainer to his father, believes Saturday is “the perfect stepping-stone” in the next stage of Mister Whitaker’s career.

Channon said: “It all depends where his ceiling is. If he has the ability go all the way to the Ryanair Chase then that would be the race for him at Cheltenham.

“Between now and then he has to improve another 15lb; whether or not he can do that I don’t know.

“The weekend is the perfect stepping-stone and if he can go and win off a mark of 152, you’re looking at a 160 horse. It’s a bit of unknown territory for us but he’s showing signs that he’s improving.”

Nicky Henderson, who confirmed Rather Be is also destined for the 2m4f contest, believes that two and a half miles is the ideal trip around Cheltenham for the lightly-raced seven-year-old.

Henderson added: “He’s always progressed every year and let’s hope he can keep it up. His last two bits of work have been very good and I think the bloom is there.”

Not seen for 869 days, the Emma Lavelle-trained Javert showed that he had retained plenty of ability when an impressive two-length winner in a 2m4f handicap chase at Uttoxeter in September.

That performance was followed by an eye-catching second behind Frodon in the Grade 2 Old Roan Chase at Aintree last month, and now all systems are go for the BetVictor Gold Cup on Saturday.

Lavelle said: “Javert needs to go left-handed and he wants nice ground. Looking at the forecast this week, hopefully the ground will be perfect for him.

“He came out of Uttoxeter really well and the plan was to go straight to Cheltenham from there. But he seemed so well in himself we thought let’s take the Old Roan in on the way.

“Looking at him, he looks fantastic and he’s a big unit.” 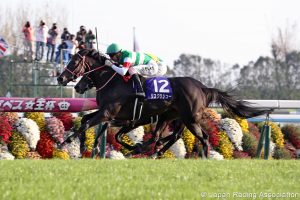