An investment of A$1.2 million by Widden Stud and David Redvers in the stakes-winning mare Bonnie O’Reilly reaped major rewards for the pair at the Magic Millions Gold Coast Yearling Sale in Australia on Tuesday in the sale of her yearling Snitzel colt for A$1.9 million to Tom Magnier.

The colt, who was in utero at the time of Bonnie O’Reilly’s purchase, was the highlight of the opening day of the Gold Coast Yearling Sale, the first major auction of its kind on the Australasian calendar.

“We went in with a bit of trepidation with the internationals not here and a lot of Sydney not able to be here. Under the circumstances it was a huge day.

“Vendors have met the market – they’re here to sell their horses and that’s instilled confidence in the buyers to bid. The average price is up on last year’s opening day, but it’s the clearance rate that is the real highlight at about 85%.”

The session-topping Snitzel colt is the first foal out of Bonnie O’Reilly, whose eight wins included the Listed BRC Helen Coughlan Stakes. In turn, the daughter of O’Reilly is a half-sister to Listed winner Pretty To Sea and from the further family of Group 1 winner Glamour Puss.

Magnier said that plans call for the colt to join trainer Chris Waller.

“He’s a really nice horse,” Magnier said. “I think all the top people were on him and we’ve got a great group of people to race him with.

“We’re going to need a bit of luck – but we’re in the right country. The prize-money is great here in Australia.

“It’s great to be at the Gold Coast and there’s so many great horses here.”

A wonderful team and a very satisfying day selling 100% including the top price colt and filly. Very proud pic.twitter.com/uD9LMYnLFe

Widden’s Antony Thompson was understandably thrilled with the result.

Explaining the story behind Bonnie O’Reilly, he said: “We were underbidders on her at $800,000 when she was retired from the track. So when she came onto the market in foal to Snitzel we just had to have her.”

His sale contributed to an excellent day for Arrowfield Stud’s champion sire Snitzel, who wound up with an average of A$628,571 for seven sold.
Demand for the progeny of I Am Invincible was understandably also hot, with the Yarraman Park Stud stallion returning an average of A$515,500 for ten sold.

They included the day’s most expensive yearling filly, a daughter of Group 1 winner Bonaria for whom Busuttin Racing paid A$975,000.
Another jewel in the Widden Stud draft, she hails from an outstanding Australian family that includes Coolmore’s Group 1 Diamond Jubilee Stakes hero Merchant Navy, himself represented by the sale of a A$500,000 first-crop colt on Tuesday.

Her sale ensured that Widden ended the day as leading vendor with four sold for a total of A$3.395 million.

Meanwhile, David Ellis of Te Akau Racing and Andrew Williams combined to pay A$825,000 for a son of Coolmore veteran Fastnet Rock. Sold by Coolmore, the colt was produced by the dual-winning Northern Meteor mare Ciarlet, a sister to top sprinter Zoustar, now a popular shuttler between Widden Stud and Tweenhills Farm and Stud.

Haras d’Etreham’s Almanzor, who shuttles to Cambridge Stud in New Zealand, made a promising southern hemisphere auction debut as the sire of a colt who made A$340,000 Chris Waller and Guy Mulcaster.

The highlight of the opening draft by Coolmore shuttler Churchill was a A$200,000 filly while Caravaggio’s high came courtesy of a A$165,000 colt.

The buying partnership of Chris Waller and Guy Mulcaster ended the day as leading buyer with eight horses purchased for a total of A$3.035 million. 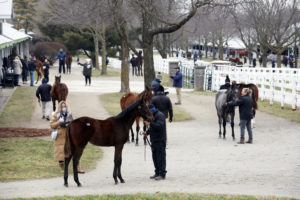