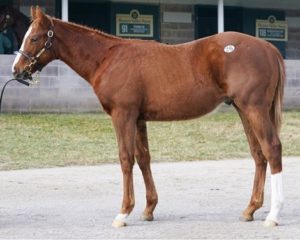 A robust opener to the Keeneland January Sale in Lexington, Kentucky, on Monday was highlighted by the sale of a weanling colt by Coolmore stallion Munnings for $475,000 to prominent owner OXO Equine LLC.

“The session was a continuation of the November Breeding Stock Sale and a good, steady start to the January Sale,” Keeneland Director of Sales Operations Geoffrey Russell said. “People have adjusted to the current marketplace. The consignors are very happy because they have adjusted to the new normal.”

“We had nearly a million dollars in sales on the internet today,” said Arvin. “It was very active.”

She added: “Those who are attending the sale are doing a good job of following the COVID-19 protocols because they know that’s how we keep people safe and are able to continue business.”

The session-topping Munnings colt was the highlight of a busy day for buyer Larry Best of OXO Equine LLC, overall the purchaser of three weanlings for a total of $980,000 to lead all buyers. They also included a Speightstown relation to champion Order Of St George who sold for $320,000 as the day’s most expensive weanling filly.

“The market for the outstanding pedigrees and the outstanding yearlings – there are enough buyers here to appreciate them,” Best said. “The Munnings colt has the pedigree and the look, and his physical is outstanding.”

About the Speightstown filly, Best remarked: “The price is what I expected given the pedigree. With a major sire like Speightstown as the sire and crossed with a Medaglia d’Oro mare (Our Smile) and to have her look this good, she is well worth the investment.”

The session-topper was offered early in the session as Lot 26 by Hunter Valley Farm. He was bred by Ben Colebrook and John T. Colebrook in Kentucky out of stakes winner Sea Shadow, by Jump Start, and is a half-brother to the stakes-placed Rising Seas.

He becomes the most expensive weanling or yearling to ever sell by Coolmore’s ascendant Kentucky stallion Munnings.

“(We) were hoping he’d bring $150,000-$200,000 – he doubled our expectations basically,” Adrian Regan of Hunter Valley said. “He was a lovely horse. We’ve been breeding to Munnings all the way (since his stud fee was at its lowest). We’ve bred to him almost every year. But in the last 12 months, every Saturday he’s had a stakes winner around the country and I think the market has really clicked to how good a sire he is. He’s a fantastic sire.”

European participation was muted although Kilflynn Farm went to $77,000 for an Iffraaj half-sister to the talented pair Roulston Scar and Special Purpose. Agent Arthur Hoyeau also paid $50,000 for the Group 3-placed Kenlova, by Kendargent, on behalf of Haras Saint-James while Fernham Farm came away with Philippine Cobra, a Showcasing relation to Earthlight, at $20,000.

The Keeneland January Sale continues on Tuesday, when the Sam-Son Farm and Paul Pompa dispersals are due to take centre stage. 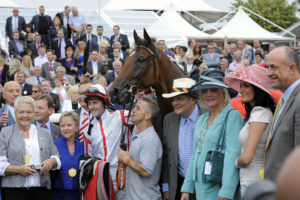