Bandwagon rolls on with Seventh Heaven

Having just exploded through the £5 million barrier in Britain alone – over £3 million ahead of his nearest rival – Aidan O’Brien has plundered most of the big prizes over the summer so far, in almost unrelenting fashion.

The pattern was to repeat itself on day two of York’s Ebor festival as Seventh Heaven continued her progression to run out an impressive winner of the Group 1 Darley Yorkshire Oaks.

With four contenders from Ballydoyle lining up, outsider Pretty Perfect took her 11 rivals along in the early stages under Paul Hanagan. Breeders’ Cup Turf heroine Found who went off favourite was held up towards the rear by Seamie Heffernan while stable companion Seventh Heaven raced towards her outside in the colour change sporting a pink cap.

As the field fanned out into the home straight, the Sir Michael Stoute-trained Queen’s Trust – who made star filly Minding work for it last time out – travelled well towards the inner under Andrea Atzeni and kicked for home. While Found tracked Cheveley Park’s filly through Seventh Heaven cut through the middle of the pack under Colm O’Donoghue and picked up in grand style to win going away by just under three lengths.

The County Cork-born jockey had last tasted Group 1 success this side of the Irish Sea in last year’s Epsom Oaks on outsider Qualify. He did however but make a successful excursion earlier this month to Haydock when winning for Coolmoore aboard Royal Artillery in the Group 3 Rose of Lancaster Stakes.

“She’s tough and genuine and has a great temperament as well as a beautiful action,” reflected O’Donoghue. “I rode her at Epsom and couldn’t believe the way she finished and Ryan [Moore] loved her after Lingfield so I’m delighted.”

A daughter of Galileo – who adds yet another Group 1 to his burgeoning roster – the filly has continued a rapid rise to stardom now having claimed two Group 1s in a row. After winning the Lingfield Oaks trial she disappointing badly behind stable mate Minding in the Epsom Oaks back in June but made amends readily last time out when running out a facile winner of the Irish Oaks at the Curragh last month.

For O’Brien success continues to breed success on a frequent basis. Although only managing runner-up in the Juddmonte International with Highland Reel he had the first two in the Great Voltigeur and another one-two in this contest, which he wins for the fourth time following on from Alexandrova, Peeping Fawn and Tapestry.

O’Brien said: “She came forward lovely from the Curragh and had a very good run there.

“We thought the track, ground and trip and everything would suit her well. She has a lot of options all the way and I’d say she’s going to make a real four-year-old because she’s big and rangy.”

Earlier in the afternoon, Queen Kindly provided a small upset in the Group 2 Lowther Stakes for trainer Richard Fahey whose fine run of form included a Group 1 success at Deauville last weekend.

The two-year-old daughter of Frankel was held up in the last pair under Jamie Spencer in the early stages with red-hot favourite Fair Eva to her outside.

She was delivered between horses inside the final two furlongs and once in the clear stayed on strongly on the far side to triumph by just under a length.

The stakes action on day two was rounded off by Abingdon who triumphed in the Listed EBF & Sir Henry Cecil Galtres Stakes for Stoute. The three-year-old daughter of Street Cry made her challenge up the inside after behind held up by Atzeni.

She took the lead within the the final two furlongs and kept on well to secure a comfortable victory by a length and quarter, notching her second success at Listed level. 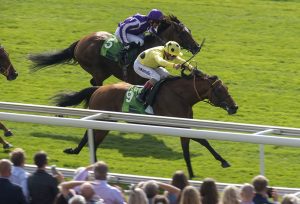 Up Next
Juddmonte glory for classy Postponed