The Group 1 Juddmonte International has an eye-catching roll of honour – a list which includes Giants Causeway, Sea The Stars and the sponsor’s very own Frankel who breezed to an emphatic triumph in 2012. This year’s renewal added another superstar to the list in the shape of Postponed who was to give trainer Roger Varian a first success in the 1m 2f contest.

Despite having to recover from a mid-season infection, Postponed displayed class and willingness in spades to triumph for owner Sheikh Mohammed Obaid in the feature on the opening day of York’s Ebor meeting.

As the race began in earnest into the home straight, Highland Reel and Postponed strode past the fading pacemaker with the latter taking up the running with three furlongs to go. The five-year-old gained a length over his field and although hotly pursued by Aidan O’Brien’s colt and the William Haggas-trained Mutakayyef, he held them all at bay by a length and a quarter at the line.

Italian-born Atzeni has developed a potent winning partnership with the son of Dubawi since their first victory together in the Listed Glasgow Stakes at Hamilton two years ago.

This victory now makes it three Group 1s in a row following on from the valuable Dubai Sheema Classic at Meydan back in March and the Coronation Cup at Epsom on Derby day.

“A lot of people had a lot of doubts about him but I never had, neither did Roger or Sheikh Obeid,” reflected Atzeni. “He’s got too much class, I think people underrate him a lot and I think he could be one of the best middle-distance horses we’ve seen in a while.”

Newmarket-based Varian has endured a lean spell in recent weeks having fielded only a handful of runners in recent weeks. Postponed his flagship horse who was sent to him last autumn made no mistake in adding to his trainer’s roster of Group 1 wins this season, with Belardo’s Lockinge success his other Group 1 win.

“We didn’t have long to get him ready, he wasn’t right three and a half weeks ago for the King George but we felt he really turned the corner two weeks ago and in the last seven days he looked to have blossomed. If you asked me a week ago I wouldn’t of known if I was running him yet.”

Earlier in the afternoon, the Kevin Ryan-trained Syphax came from last to first to claim the honours in the Group 3 Tattersalls Acomb Stakes. The two-year-old son of Arch was stepping up from maiden company having won comfortably on his first start at Musselburgh last month.

Jamie Spencer, who was working on the colt in early stages delivered him with a strong run on the outside in the final furlong to collar Godolphin’s Best Of Days by a head.

Ballydoyle surprisingly hadn’t hit the board in the Group 2 Betway Great Voltigeur Stakes since 2003 with Powerscourt who was ridden by Mick Kinane.

This dry spell ended in this year’s renewal as Irish Derby runner-up Idaho landed the contest by just under two lengths from stable companion Housesofparliament.

A full brother to Highland Reel, the three-year-old was held up in the last pair under Seamie Heffernan and made a strong challenge in the final furlong to claim the prize, advertising his credentials for the last Classic of the season next month. 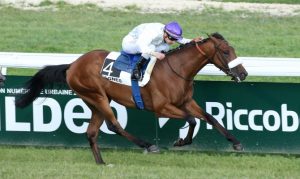 Up Next
Kidmenever: Claimer to Arc contender