14 not out for Winx
Stories

Five-time Group 1 winner and hero of the 2011 Ascot Gold Cup, Fame And Glory, has passed away at the age of 11 after suffering a suspected heart attack while covering a mare at stud.

A tweet released by Coolmore stated: “Fame And Glory passed away this morning after suffering a suspected heart attack when covering a mare.”

The 11-year-old, who stood at Coolmore’s Grange Stud in County Cork for the last four seasons, was a winner of Group 1 races as a two, three, four and five-year-old.

One of his best performances came in defeat when chasing home Sea The Stars in the 2009 Epsom Derby.

Only 12 months later he would make a return to the Downs and on this occasion land the Group 1 Coronation Cup over the Derby distance, defeating an Oaks winner in Sariska in the process.

He then went on to prove himself as a high-class stayer, taking the 2011 Ascot Gold Cup. That day he powered clear in the hands of Jamie Spencer to take the two mile contest by three lengths.

During the later stages of his racing career, he would race in the familiar pink and green silks of Jim and Fitry Hay who bought into the colt at the beginning of his five-year-old season.

It’s a great shame as he was a grand horse

A son of Montjeu, he had a very exciting new career ahead of him and had taken the eye of National Hunt breeders.

Only two of his sons have made it to the racecourse including the multiple-race Lester Kris who is in training with Richard Hannon.

During the last three breeding seasons, Fame And Glory covered books of 263, 346 and 243 mares.

Grange Stud Manager, Albert Sherwood, said: “It’s a great shame as he was a grand horse and based on the quality of his stock we thought he had the makings of a hugely successful stallion.” 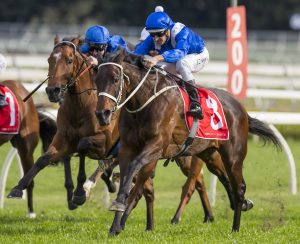 Up Next
14 not out for Winx