Crowley to be Hamdan's first
Stories

The Long Distance Hurdle has been dominated by the very best staying hurdlers in years gone by, including none other than Thistlecrack 12 months ago.

It looked to unearth another star this time around in the shape of Harry Fry’s Unowhatimeanharry, who powered to his second Grade 2 win over hurdles.

Running in J.P McManus’s silks for the first time, the eight-year-old was held up under Barry Geraghty early on.

A regular in the race Reve De Sivola, who finished runner-up behind four-time winner Big Buck’s, shared the lead with the grey Maximiser.

The veteran Menorah took up proceedings on the turn in, with Unowhatimeanharry and Irish-raider Snow Falcon the only two still on the bridle.

Noel Meade’s charge crumpled three out exiting the race with Sean Flanagan. Keeping on, Menorah was tracked stealthily by Unowhatimeanharry who jumped ahead at the second last.

He came clear of his rivals despite an untidy jump at the last, scoring by a cosy six lengths from runner-up Ballyoptic.

The son of Sir Harry Lewis has now made it six wins in a row over the smaller obstacles. His most recent success came back in March at the Cheltenham Festival when running out a game winner of the Grade 1 Albert Bartlett Novices’ Hurdle.

“He did it really well, jumped well travelled at every stage of the race,” reflected Geraghty.

“He really enjoys his racing and it was a great performance. It will be interesting to see now how he fares as he steps up in grade.”

A flag bearer last season for the Harry Fry Racing Club, his new owner looks to have a credible World Hurdle challenger on his hands. His trainer has stated that the Long Walk Hurdle at Ascot in three weeks time will be the next target.

Fry said: “He gave us a great day in March, he had it all to prove today and it’s taken a while to get him out.

“To come and see him do that I couldn’t of expected that. We took him out last week on the heavy ground, it wouldn’t of mattered the way he’s won today but we just didn’t want to get to the guts of him first time out with top weight.”

Earlier in the afternoon, the Nicky Henderson-trained Jenkins made a winning debut over hurdles in the opening Maiden Hurdle.

He really enjoys his racing and it was a great performance

The first part of a treble for Geraghty, the four-year-old was sticky over the first few flights but after hard riding got on terms with third-placed Captain Forez. Deep inside the final furlong he drew clear to win by a comfortable five lengths.

Paul Nicholls got himself on the score sheet courtesy of Clan Des Obeaux, who took the Grade 2 Fuller’s London Pride Novices’ Chase.

A four-year-old son of Karpgarde, he jumped proficiently in the hands of Sean Bowen and came clear on the bridle to win by an emphatic ten lengths. 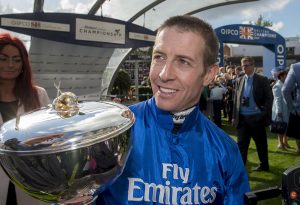 Up Next
Crowley to be Hamdan's first