Members will be updated on progress following the Economic Impact Study

Officials of any trade association worth its salt welcome the opportunity to meet members to chew over matters of mutual interest, and for the TBA there is no better time or place than the annual general meeting, which will be held at Newmarket in the Jockey Club Rooms on Wednesday, July 9 at 9.30am.

There is no doubt that the most significant event of the last 12 months was the publication, just before the start of the Turf Flat season in March, of the Economic Impact Study that we commissioned from PriceWaterhouse Coopers. As well as highlighting the worth of the breeding industry to Britain’s economy – £281 million a year and support for 86,000 full or part-time jobs, many in rural areas – PWC’s report identified some alarming and potentially critical issues, the most serious of which is the supply base and production of foals, which are vital if the present British racing fixture list is to be fulfilled.

Providing adequate field sizes has become a growing concern for all sectors of racing and betting, and breeders are at the front line, as the report so vividly points out. However, while the document is important – as important as any with which the TBA has been associated – it is not an end in itself. In fact, I believe it represents a signpost at the beginning of the road to recovery, and the TBA board has already taken the first steps forward.

One of the initial issues to be addressed – the plight of National Hunt breeders, which was one of the major points in the PWC report – has been taken up by a sub-committee chaired by Robert Waley-Cohen, and its plan went to the Levy Board late last month. I will have more news about this at the AGM.

Other initiatives emanating from the Economic Impact Study are being driven by individual board members, including the formation of a committee for small breeders, chaired by Philip Newton, which will concentrate on issues that particularly affect this vital sector. TBA Vice Chairman Julian Richmond-Watson is heading discussions on further refinement of the BOBIS incentive scheme, especially with commercial vendors in mind. He is also overseeing a review of staying-race opportunities balanced against the desire to breed for speed, which is all the more pertinent after the Investec Derby success of Australia, who is by a Derby winner out of an Oaks winner, and was bred by one of the longest-established families of British owner/breeders, that of Lord Derby.

More on these topics later, as well as on the TBA Buying Group, which is being launched at the AGM and will provide added value to membership by offering the opportunity to make savings on all business essentials, from fuel and electricity to mobile phones and vehicles, through Affinity, a subsidiary of Anglia Farmers Ltd.

These initiatives will bolster work that the TBA has been doing in other areas, either collaborating with fellow stakeholders within the Horsemen’s Group or fighting battles that specifically concern breeders. Eyes usually glaze over when I explain how we tackle the bureaucracy that comes with dealing with EU or government issues, but keeping abreast of developments in Brussels and Westminster is crucial.

This year TBA officials have retained eligibility for stud farms under reforms to the Common Agricultural Policy; they have helped to convince the World Organisation for Animal Health (OIE) to reverse a decision on the transport of pregnant mares that would have been catastrophic for sales companies and commercial breeders; and they have mounted a stout defence of the current regulations on notification of CEM and EVA.

Pretty dry stuff, perhaps, in the context of multi-million-pound sales and the excitement of following a first-season sire’s progress, but vital nevertheless.

While the TBA’s board and executives continue to play their part within the administration of racing and take a closer role in planning industry strategy, the association as a whole is only as strong as its members are active. I look forward to them making that point on July 9. 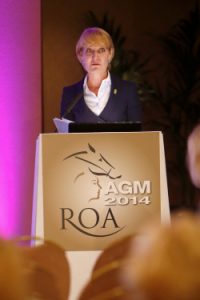 Up Next
Levy needs replacing with Racing Right