In the famous silks of Ballymacoll Stud, Abingdon made an impressive seasonal reappearance by running away with the Pontefract Castle Fillies’ Stakes over a mile and a half.

Her first racecourse outing since early September, the four-year-old filly was ridden along from the stalls by Ryan Moore but soon adopted a handy position tracking the leaders.

Travelling well approaching the turn in, Abingdon was switched out from in behind pacesetter Pure Art, looming large.

She went to the front with ease a furlong and a half out and soon stretched clear of her seven rivals.

At the winning post she was a fully ten-lengths clear of the second and third, Lucy The Painter and Shearling.

Moore said: “She’s a very smart filly, she won two Listed races last year at Newbury and York. I think bad ground at Doncaster maybe got the better of her. She’s a big girl and probably struggled to pull herself out of bad ground.

“Hopefully she’ll get a Group race win before too long she’s a nice filly and today look it probably wasn’t the strongest of races but when you win by ten [lengths] it’s a very good performance.”

A daughter of Street Cry, Abingdon takes her win record to four from seven starts.

Quiet clearly an exciting proposition for the remainder of the season, she is entered in next month’s Group 1 Pretty Polly Stakes at the Curragh although it remains to be seen whether she would take up the engagement. 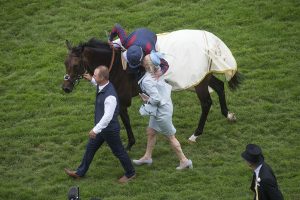 Up Next
Fanshawe casts a Royal spell