The last Group 1 of the week, the Diamond Jubilee Stakes, saw course specialist The Tin Man ran out a convincing winner for his Newmarket-based handler James Fanshawe.

Held up for his usual late run by Tom Queally, the 19-strong field were taken along by Kachy with Godolphin’s Comicas a close second.

Coming into the final two furlongs the market leaders Limato and The Tin Man were still five lengths off the pace.

As the leaders began to wilt, The Tin Man was switched to right to the far side rail and came with a strong run. Limato challenged more to the centre under Ryan Moore and Duke Of York-winner Tasleet threw his hat into the reckoning half-a-furlong down.

Although Tasleet came home strongest, The Tin Man had developed an unassailable advantage and claimed the six furlong prize by a neck.

“He’s a good horse in this division,” reflected Queally.

“It’s very hard to get a ride here even harder to ride a winner. It’s nice to get a winner here.”

Although unable to land a blow in this very race 12 months ago, the son of Equiano won the Champions Sprint Stakes in good style over the course and distance last October.

Fanshawe said: “I’m a very relieved man and extremely grateful to a) The Tin Man putting up a fantastic performance, Tom gave him a great ride and everyone back home.

“He doesn’t tell you a thing at home. The Tin Man is a star horse and we are lucky to have him.”

Earlier in the afternoon, the superbly-bred September ran away with the Listed Chesham Stakes over seven furlongs for Aidan O’Brien.

Out of multiple Group 1-winning mare Peeping Fawn, she got to grips with long-time pacesetter Nyaleti inside the final furlong and won going away by two and a quarter lengths.

He doesn’t tell you a thing at home

Ballydoyle’s sixth and final winner of the meeting came in the Group 2 Hardwicke Stakes, as their dual Derby-placed Idaho fended off all challengers in the run to the line.

A full-brother to Highland Reel, the four-year-old was ridden just off the pace under Seamie Heffernan, and came through with a strong run inside the final furlong and had enough to repel late comer Barsanti. 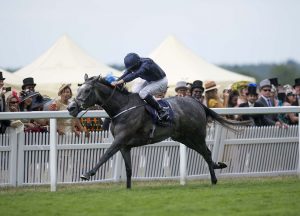 Up Next
Winter rolls on