Mister One paid for their gallop, but Colin and Joe Tizzard now have 60 horses, including Cheltenham Festival contenders

Colin Tizzard was born in a caravan in Milborne Port and has never left the Dorset village. The caravan has long gone and the Tizzards’ land, split between three brothers, now stretches further than the eye can see. Front of house, where the A30 meanders towards Somerset and all points west, is a racing stable brimming over in numbers and ambition. Where cows once took priority, Cheltenham winners are trained now.

This is the home of Cue Card, one of the box-office acts in jump racing. Like most horses here, he lives in a converted cowshed, nourishing the casual preconception of a rustic operation, a farmer with a hobby. A morning here dispels that impression. The Tizzards are a rising force, and they mean to go on rising.

The stable has enjoyed winners at the last two Cheltenham Festivals, through Cue Card and Oiseau de Nuit, and will send its biggest and most portentous team this month. More than 60 horses are trained here now, 40-odd in the main yard and another 20 across the village, where extra boxes have been built at the home of Colin’s jockey son, Joe.

A dreary dawn has just broken over the village. Catrin Eymon, a strikingly efficient head girl who joined from Peter Bowen’s yard, has briefed Colin on the horses in front of a battered work board. In the yard, Brendan Powell jnr and Steven Clements swap stories of takeaway meals as they muck out. The riding talent here is not confined to close family.

Colin takes me on a wheel-spinning tour of the facilities, including a smart, new schooling ring, built by his brother Robert. Soon, we are standing beneath trees alongside a challenging woodchip gallop, surveying the Tizzard farmland surrounding the grounds of stately Ven House, home to the designer Jasper Conran. “If this hill hadn’t been on the farm, I would never have trained,” Colin says simply. “It wouldn’t have worked without this.”

A more poignant usage is now pointed out. Four years ago, Tizzard’s late father, Les, was buried on the hill. “He can see the horses every day,” the trainer said.

This is a close family in every respect, still bound to this village even if some have fluttered their wings. Joe is milking 250 cows during first lot but he is back in the farmhouse as his mother, Pauline, cooks breakfast. Although the farmhouse sign still advertises bed and breakfast, these days, by choice, she confines it to family and friends.
Kim, Joe’s sister, arrives from her married home in Mere, wryly announcing that her main duty of the day is to prepare Colin’s hunter for a meet later in the day. “I’m the gofer,” she says.

If this hill hadn’t been on the farm, I would never have trained. It wouldn’t have worked

Colin has the ruddy features, ruminative manner and sing-song voice that might caricature a Dorset farmer. For some years, that was all he expected to be, as his family history tells.

“Father lived in the Queen’s Head pub in Milborne Port and kept half a dozen cows in what’s now the skittle alley,” he begins. “When he married mother, he moved down to Ven as a tenant farmer. They got going with about ten cows and lived in the caravan, where I was born.”

As his parents moved from the caravan to a rented cottage, and eventually built the house now known as Venn Farm, Colin had a sporting childhood beyond the usual country pursuits. “I played a lot of cricket at school, up to county colts’ level,” he says. “I was vice-captain of the Yeovil district team and Ian Botham was captain. Do’you know, he never used to bowl as a boy, then one day in a game he suddenly grabbed the ball and said he’d have a go himself. Of course, he was better than all of us. After he’d been on the MCC groundstaff he came back here and played football in our local Sunday league. He was only 18 but such a huge lad, he’d knock everyone over.” 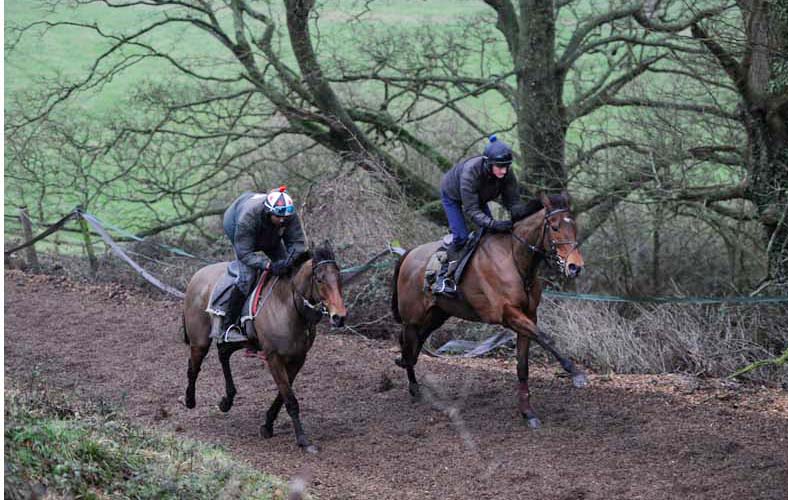 Cue Card, right, in the build-up to Cheltenham

Of the four Tizzard sons, three stayed farming. “We had enough land and felt we needed three farms,” Colin says. “After six months of arguing, we sorted it out. That was our future.”

Except it wasn’t. Alan and Michael still concentrate on cattle, more than 1,000 on each of their farms, but Colin’s diversion into horses was quickly under way. “I rode in point-to-points on horses we kept, but they were only ever half fit,” he says. “When Joe came on the scene we thought we’d better make sure they were fitter. We bought two for him to ride when he was 16, they each won four races in that first season and it kicked off from there.”

The crunch came when Joe turned professional and hit an immediate jackpot as stable jockey to their meteoric near neighbour, Paul Nicholls. “That last season of pointing, with Joe not riding, wasn’t much fun,” Colin says. “I suppose we could have stopped then but I decided to get a licence and move on.”

Ian Botham played in our local league. He was only 18 but such a huge lad he’d knock everyone over

Ironically, the horse that ignited their dreams came from Nicholls and his landlord, Paul Barber. Across the breakfast table, Joe takes up the story: “Mr Barber had a horse called Mister One, who’d broken down twice. He said we could have him if we were prepared to have him in a field for 18 months. We got him back slowly and he won two Cheltenham races for us and a Royal Artillery Gold Cup. You could say he paid for the gallop.”

It has all turned full circle now, with Joe back full-time in the family business. I ask how father and son rub along. “Horses are easy, we’re both aiming for the same thing,” Joe says. “I don’t get riding instructions too often and I don’t listen anyway. We probably argue more over the farm than anything else.”

“It’s not easy for Joe,” his father puts in. “I’m still the boss and I think I should make the telling decisions, just like my father did until he retired. But we’re doing this together, more than ever before.

“Joe is still primarily a jockey but he’s looking to take over from me, getting ready for the next stage in his life. But I can’t see me retiring for a few years yet and I can’t see him stopping riding. Four years from now, I’ll be 60. Maybe that will be the time to let go.”

You sense he has ambitions to fulfil before that day comes. The business is flourishing, despite difficult economic times. “The financial climate is still so poor that we’ll probably do well to stand still for a couple of years,” he says. “Every trainer is going to be affected. But farming is in a good period now and the two overlap for us. 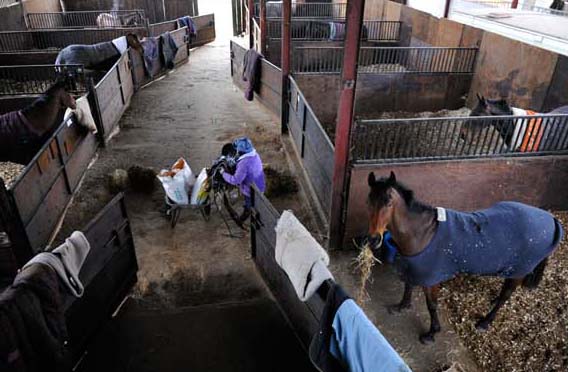 Tizzard’s yard is set on a Dorset dairy farm

“I’m sure some people think I spend too much time farming and not enough with the horses, but I don’t think that’s fair at all. The two overlap but they complement each other. Every morning is spent training the horses and, 90% of the time, I’m dealing with the owners and the hassle. The farm allows me to get away for a while, each day. Sorting the cows can take my mind off things. But, you know, I really don’t count training as work.

“As we’ve got more horses, we keep having to push the cows further away. But with the facilities we have here, we could manage twice as many horses – and I will never turn one away. We’ve concentrated on store horses and, with the type of owners we have now, I can go to the store sales and buy the best.”

That is what he did at the Derby Sale in 2009, paying €52,000 for Cue Card. “We went out there with Bob and Jean Bishop, who have been in racing a long time and were looking for a horse we could get on with,” he says. “Cue Card was a real sharp type, out of a good mare (Wicked Crack). I thought I could win a bumper with him the following season – but I never dreamed it would be the Champion Bumper.

“I remember that day at the Festival, watching him walk round the parade ring next to Willie Mullins’s big six-year-olds and thinking he looked a pony. I lost a bit of faith then and told Joe to look after him. When Joe went right round the outside and took it up at halfway, I thought he wouldn’t get home. But he bolted up.

“Last year, Cue Card was all anyone wanted to talk to us about. It was fever pitch here. We had the press in several times a week and everyone thought he was unbeatable. But we couldn’t run him between Christmas and Cheltenham and he didn’t have his usual flamboyance in the Supreme.”

After much discussion, sometimes heated, between father and son, the Arkle Trophy is the Festival target this time round. “Dad tried to make him slow,” Joe says cheekily. “But I always thought Cue Card had the speed for two miles.
“He will get further and be a King George horse but, at the moment, he doesn’t need to. You need a stayer to win an Arkle and he definitely gets two and a half.”

The Festival team is chewed over, along with the toast. Third Intention – “the first three-year-old we had in the yard” – is fancied for the County Hurdle and Oiseau de Nuit for a follow-up in the Grand Annual. The latter is owned by Terry Warner, who won the Champion Hurdle with Rooster Booster but now has more horses with Tizzard than any other trainer.

“He likes being able to talk to any of us about his horses,” Kim suggests. “He enjoys the fact that it’s a real family concern.” 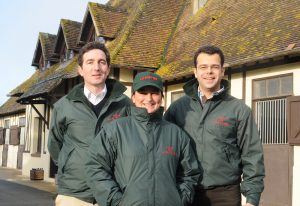 Up Next
Reward for effort