Godolphin made their presence felt in Newmarket on Wednesday, spending a total of 10,495,000gns to fuel the top end of the market during day two of Book 1 of the Tattersalls October Sale.

With Sheikh Mohammed once again in attendance, Godolphin came away with three of the day’s eight seven-figure lots led by the session-topping son of Frankel, who became the most expensive yearling to sell in the world this year when knocked down for 2.8 million guineas.

Out of Musidora Stakes winner So Mi Dar, a sister to Too Darn Hot and therefore a member of Watership Down Stud’s prized Darara family, the colt became the subject of an intense duel between Sheikh Mohammed, bidding through Anthony Stroud outside the ring, and Bill Farish of Lane’s End Farm, sitting to the right of the auctioneer with agent David Ingordo. Farish purchased the colt’s Sea The Stars half-brother for a session-topping 1.2 million guineas through Charlie Gordon-Watson at last year’s sale and so has an affinity for the family but ultimately he was forced to give best to a determined Godolphin party.

“It’s a stallion’s pedigree,” said Stroud. “He’s from one of Watership Down Stud’s best pedigrees, and they do a great job. He was a jewel in the crown. It was more than I anticipated but he’s an extremely nice horse. If he’s good, he’s an extremely valuable horse. Bill Farish and David Ingordo were the underbidders and they’re strong competition.”

Not only that, Godolphin are in a good position to appreciate the Frankel – Dubawi cross given that it’s also responsible for their Derby winner Adayar and Meydan Group 1 winner Dream Castle. 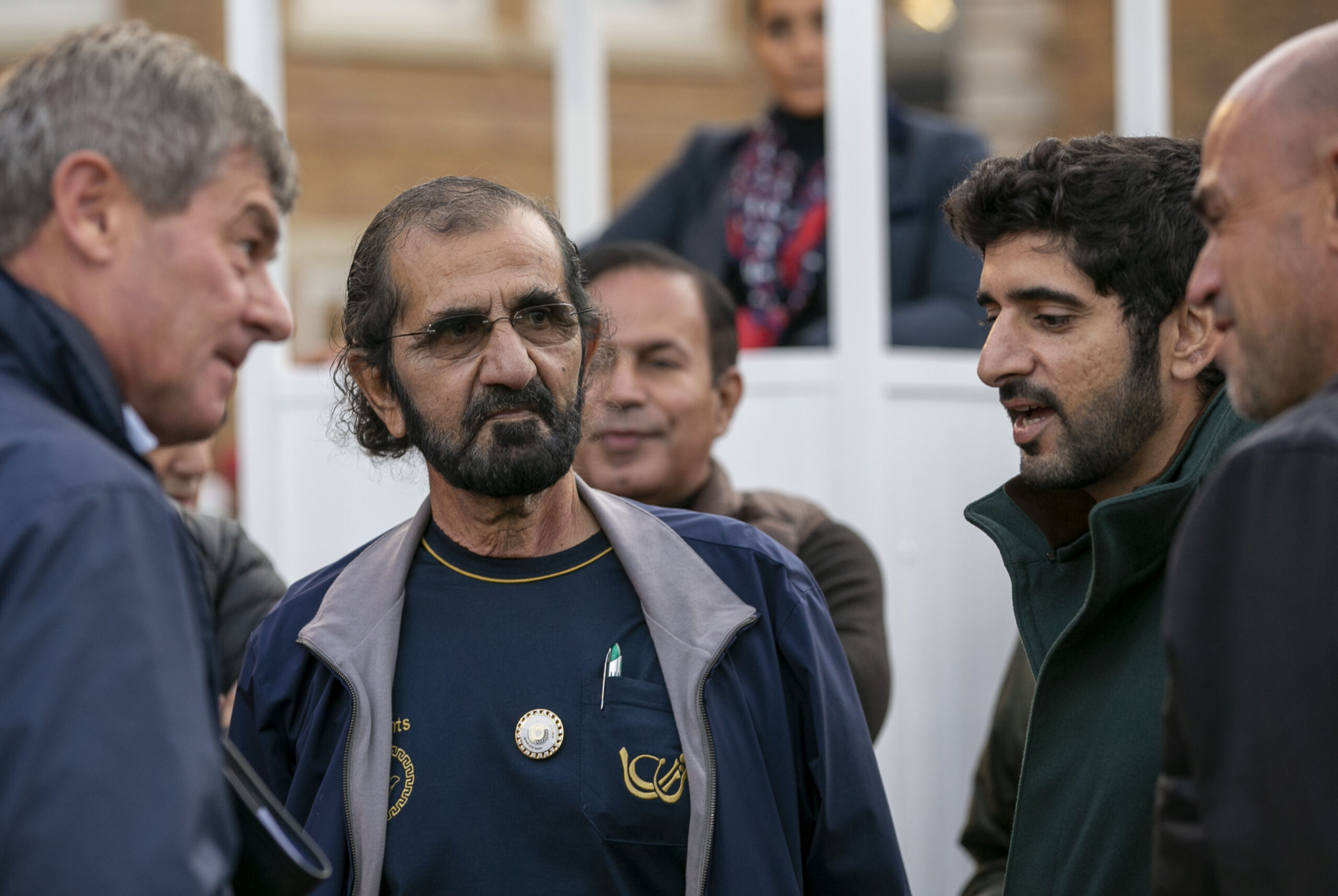 “It’s extraordinary when you have a horse like that and he fulfils everything you’d want,” said Watership Down Stud’s Simon Marsh. “He’s always been an exceptional individual but you know these things don’t happen by accident. There are an enormous amount of people involved in getting them here. Terry [Doherty] who has been with us for 30 years, Connor who led the horse up, Donna [Vowles], our manager at Kiltinan Stud in Ireland, the feed people, the farriers – all these people have to come together to be able to get a horse here today. And for him to have done what he did was amazing, so we’re absolutely delighted.

“It’s an amazing family and we’re incredibly lucky. It was a no brainer to send the mare Frankel although she did go to Galileo and Sea The Stars first. She has a lovely Frankel filly foal and she’s back in foal to Frankel as are Lah Ti Dar and her sister Darlectable You. Dar Re Mi has a Kingman yearling filly and a foal by Lope De Vega, so there’s a lot going on.

“When you get involved in one of these families and they keep going, it’s amazing. We’re actually going to send Darlectable You to Gun Runner next year, which will be interesting – get some new blood into the family.”

On a day that was the highest grossing day in European bloodstock auction history, eclipsing the record set during the 2017 Tattersalls December Sale, a total of 144 yearlings sold in total for 49,545,000gns and an average of 344,062gns, up 49 per cent from the corresponding day in 2021. The median also took a major leap forward, rising by 25 per cent to 200,000gns. 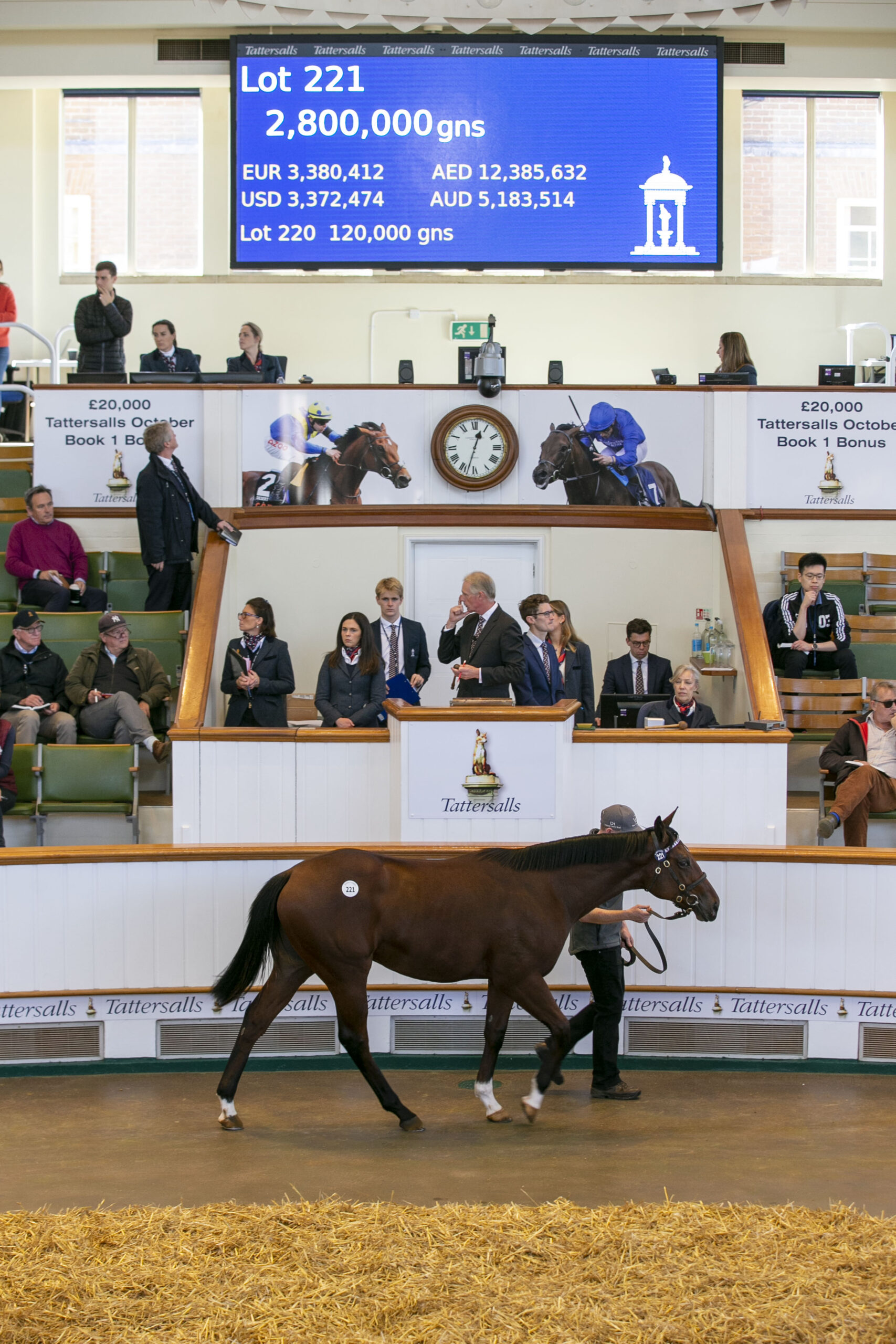 The Frankel colt out of So Mi Dar is the most expensive yearling sold worldwide this year. Photo – Tattersalls

Brother to Without Parole to Godolphin

Godolphin also came out on top at 1,300,000gns for the brother to St James’s Palace Stakes winner Without Parole, sold by Newsells Park Stud on behalf of breeders John and Tanya Gunther.

Their dam, Without You Babe, has been a wonderful producer for the Gunthers, with her progeny also including the Breeders’ Cup Dirt Mile winner Tamarkuz as well as Listed winner She’s Got You. The mare’s Frankel two-year-old colt, Rebel Red, also looks potentially useful judged on his debut second for the Gunthers and Ralph Beckett at Salisbury last week.

“I wanted to race him but you need the cash flow in order to pay the bills,” said an emotional John Gunther. “To me he was just a fantastic looking yearling and he had a presence about him – he was sort of special. Last year’s brother was a little bit bigger and heavier and he was a chestnut whereas this one is more like Without Parole. I raced the first two Frankels out of the mare and I wouldn’t have minded racing this chap too I loved him so much. But it was nice to see Sheikh Mohammed buy him and I’m sure they’ll do a fantastic job with him.”

He added: “Without Parole has some lovely foals. We sent some nice mares to him and we’re excited about his offspring coming up. We still have that to look forward to.”

Godolphin’s purchase of the Dubawi colt out of Pretty Polly Stakes winner Urban Fox for 1,100,000gns also gave his breeder, Barnane Stud, plenty to cheer about, especially as the stud is still in its formative years under the guidance of former professional cricketer Craig Kieswetter outlines.

“The stud farm is growing, and we are adding mares and there are some beautifully-bred fillies we are taking to the track,” he said. “It is the early days for us but it is going in the right direction. Urban Fox herself is in foal to Frankel.

“We have 15/16 mares and six of them are bred on Southern Hemisphere time for the operation in South Africa. We have some exciting plans down the road, and building a stud farm takes time, but to have some good mares with good covers is fantastic.”

He added: “Urban Fox is a lovely mare, but by Foxwedge there were a few question marks when we bought her out of training. She was terrific on the racecourse, travelled really well around Europe and won some good races and Sam Haggas helped us with her purchase.

“We are delighted with this result and we wish Sheikh Mohammed and his team all the best, and we are very grateful. Dubawi is a top sire, and the team at home has done a remarkable job, and David [Cox] and his team at Baroda as well. You can do the matings, but you have also got to get the specimen.”

Dubawi wasn’t the only stallion to enjoy a big day in the sale ring. The session also a provided a remarkable few hours for Frankel, who returned an average of 907,500gns buoyed by the presence of four seven-figure yearlings. In addition to the 2,800,000gns So Mi Dar colt, the group included Frankel half-brother to Broome and Point Lonsdale, who will be joining his older siblings in Ballydoyle after selling to MV Magnier at 2,400,000gns.

“Denis Brosnan is a very good breeder and we’ve had a lot of luck buying good horses off him in the past,” said Magnier after outbidding Godolphin. “Frankel is doing very well as everybody knows. Those sons of Galileo are going very well – Churchill is doing very well now too, as is Australia and Gleneagles also. We had the two brothers before – they’re two very good horses. They’re all quite similar – good-looking, flashy animals.”

They are out of Sweepstake, winner of the 2007 Listed National Stakes at Sandown for Richard Hannon who joined Croom House when bought for $280,000 at Keeneland in November 2011.

“Sweepstake has been very good for us,” said Brosnan. “She was originally bought by Peter Doyle, trained by Richard Hannon and then sold to America, and that’s when we bought her. We bought her because we had several of the extended family – Tyranny, the dam of [Croom House-bred] Zoffany is under her second dam.

“It’s lovely when you see a  lot of bidders up to 2 million and then you have Sheikh Mohammed and Coolmore going head to head after that. We sold a mare, Sumora [dam of Gr.1 winner Maybe], once for 2.4 million and it’s nice to do it again.” 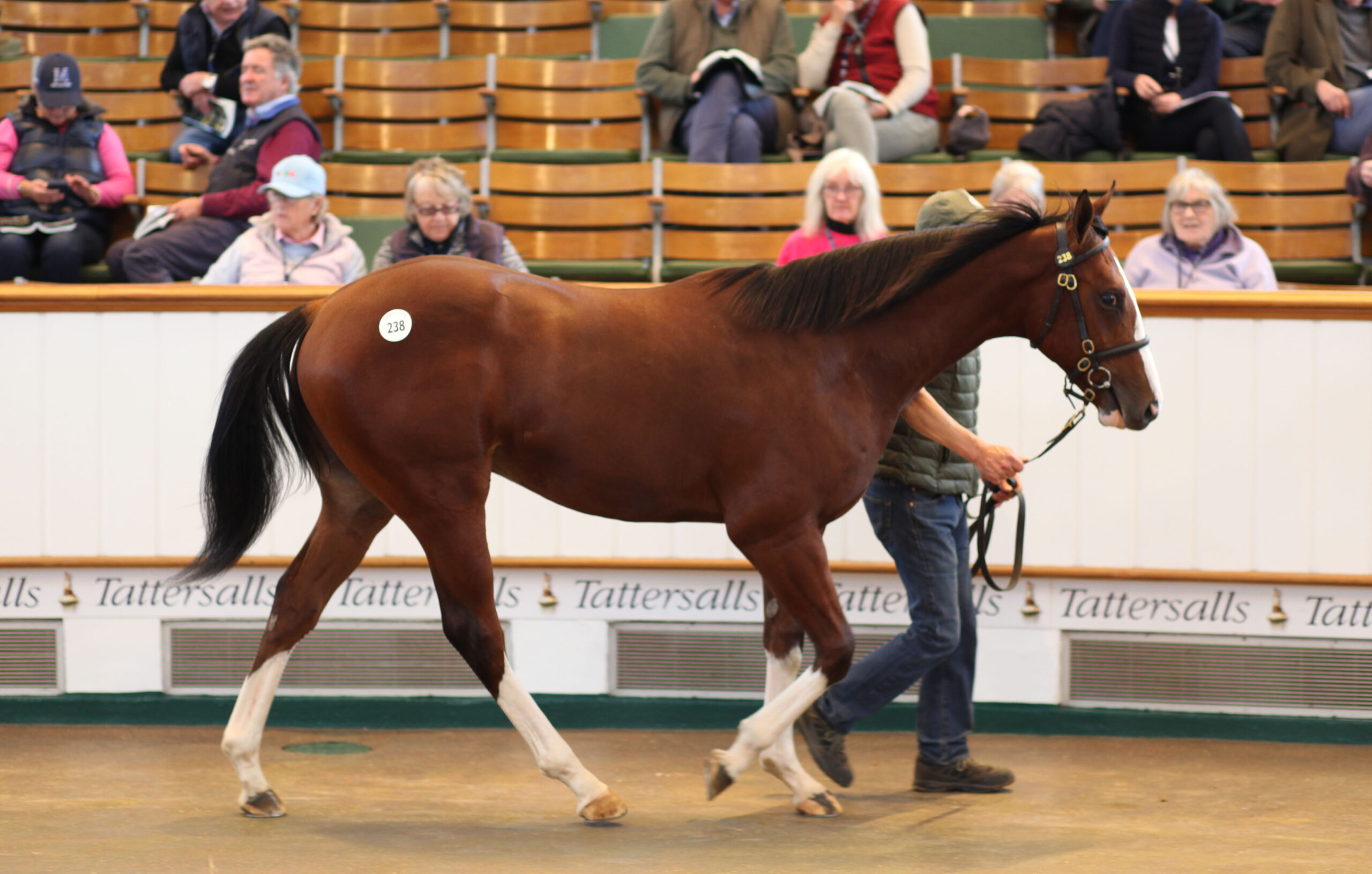 Magnier had earlier swooped for the first seven-figure lot of the day, another by Frankel in a filly out of the Listed-placed Shambolic from Newsells Park Stud.

“Frankel is obviously doing extremely well,” said Magnier, signing in partnership with Peter Brant’s White Birch Farm. “In fairness to Newsells, they’ve always been very good breeders over the years, and many congratulations to [stud owner] Graham Smith-Bernal and Craig Bennett [owner of Merry Fox Farm] for producing such a filly. When you breed a good filly like that, you deserve to be rewarded. She has a lot of quality.”

Her dam Shambolic was trained by John Gosden to win two races and run second in the Listed Pretty Polly and Height Of Fashion Stakes. By Shamardal, she is out of the late Duke Of Roxburghe’s great mare Comic, whose nine winners include Hong Kong legend Viva Pataca and American Grade 1 winner Laughing.

The dearest filly of the day, however, was the Lope De Vega half-sister to Battaash and The Antarctic, who sold to Richard Knight following a frenzied bidding war between celebrity chef Bobby Flay, Amo Racing and Joe Burke.

The most expensive Lope De Vega yearling to ever sell, the filly was bred by Ballyphilip Stud out of Anna Law, who was famously bought for just 14,000gns for Anna Law as an unplaced two-year-old at the 2012 Tattersalls Autumn Horses in Training Sale.

“She’s an absolute beauty,” said Paul McCartan. “I think she’s the nicest filly we’ve ever had. I always said Ladies First was, she was very good to me as well, but this one was especially nice. The mare is a beauty as well. I wish Richard Knight all the best with her and I hope she’s very lucky for her connections.”

“I thought she was probably the pick of the fillies in the sale,” said Knight, who has been extremely active this year on behalf of an undisclosed client. “She’s very racy and obviously she’s by a top stallion and a half-sister to Battaash, she just ticked so many boxes. She’s a gorgeous physical, she’s very athletic and I’m just delighted to get her. She’ll stay in Britain and a trainer will be decided at a later stage. She’s for an undisclosed client. She’ll be a gorgeous filly to breed from at the end of the day.”

He added: “It’s been fantastic. Normally when we go into most sales you have a smaller budget and one or two horses might drop onto the list and they’re the ones you buy. In the last weeks it’s been a fantastic opportunity to go and buy the ones you really want to buy. It’s been thoroughly enjoyable.

“I’ve found it very strong today, I really liked the Frankel filly from Newsells earlier, but we put a value on everything and if they go over budget we stop.”

The final session of the Book 1 sale starts at 11am on Thursday. 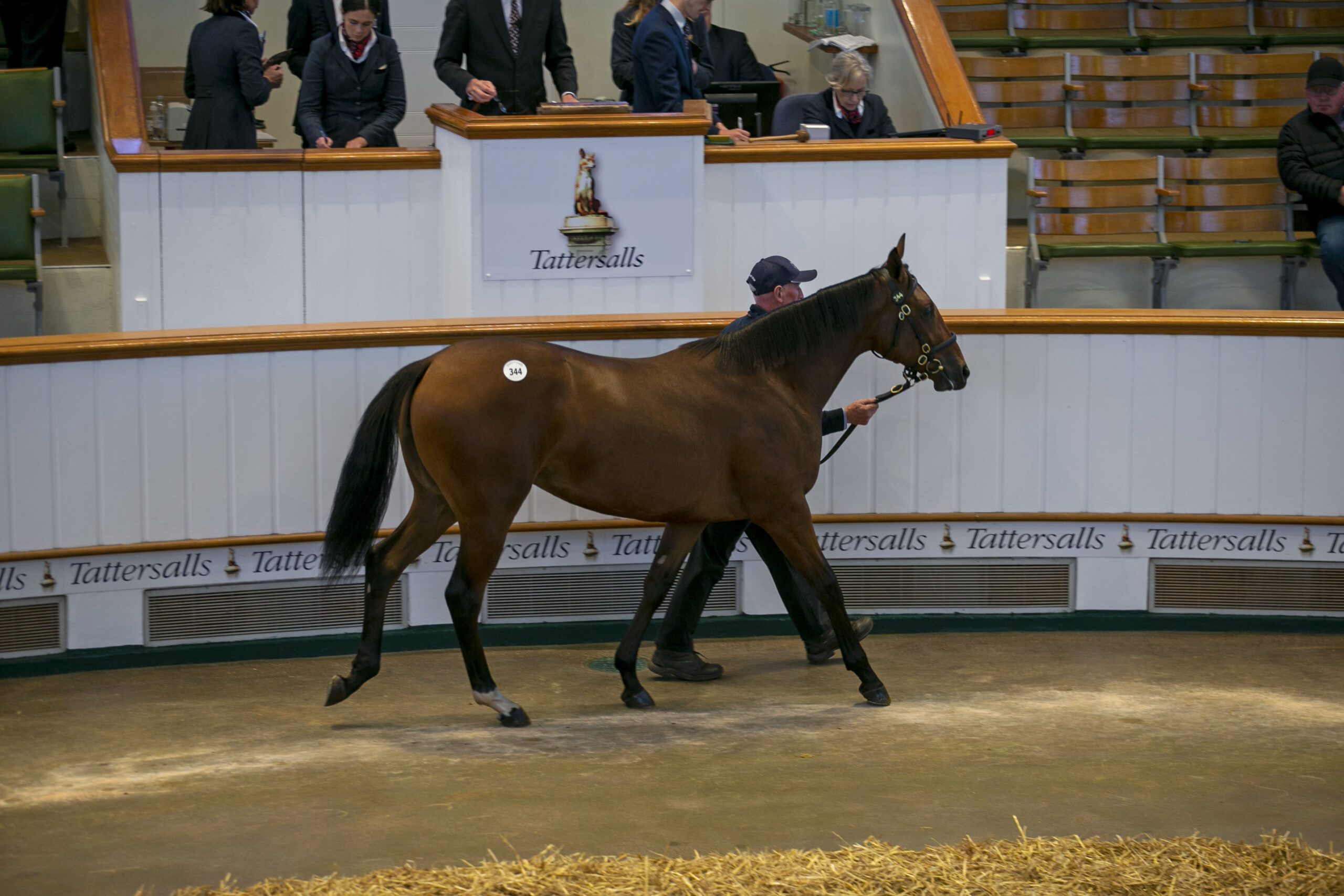 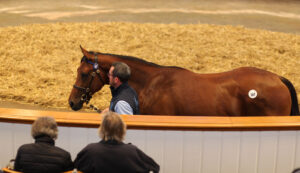