Arc joy for Rausing, Prescott and Morris with Alpinista
Stories

Dubawi accounted for each of the day’s seven-figure lots

A Dubawi relation to dual Classic winner Hermosa topped a vibrant opening session of Book 1 of the Tattersalls October Sale on Tuesday when sold to Godolphin for 1,500,000gns.

On a day when Dubawi accounted for each of the three million-guinea lots, a total of 139 yearlings were sold during the day for 31,993,000gns, up 27 per cent from the opening session last year. That corresponded to a clearance rate of 86 per cent while the average rose by 10 per cent to 230,165gns and the median by five per cent to 160,000gns.

The session-topper provided another feather in the cap for vendor Adrian and Philippa O’Brien of Hazelwood Bloodstock, who sold the colt on behalf of breeder John Camilleri.

The colt hails from an accomplished family associated with both Kilfrush Stud and Coolmore as a grandson of the Group 2 winner Beauty Is Truth, whose stud record includes three Group 1 winners in Hermosa, Hydrangea and The United States. The colt’s dam Ring The Bell only ran once herself for Aidan O’Brien but she has also been quick off the mark at stud for Camilleri with her first foal Voice Of Angels attaining black-type when a close third in this season’s Listed Cairn Rouge Stakes.

“He’s a Dubawi from an excellent farm,” said Stroud after outbidding Japanese trainer Mitsu Nakauchida. “He’s a wonderful specimen of a Thoroughbred. It’s a cross that works, Dubawi over Galileo, and it’s a wonderful family.

“The boss is here and he’s choosing these horses.” 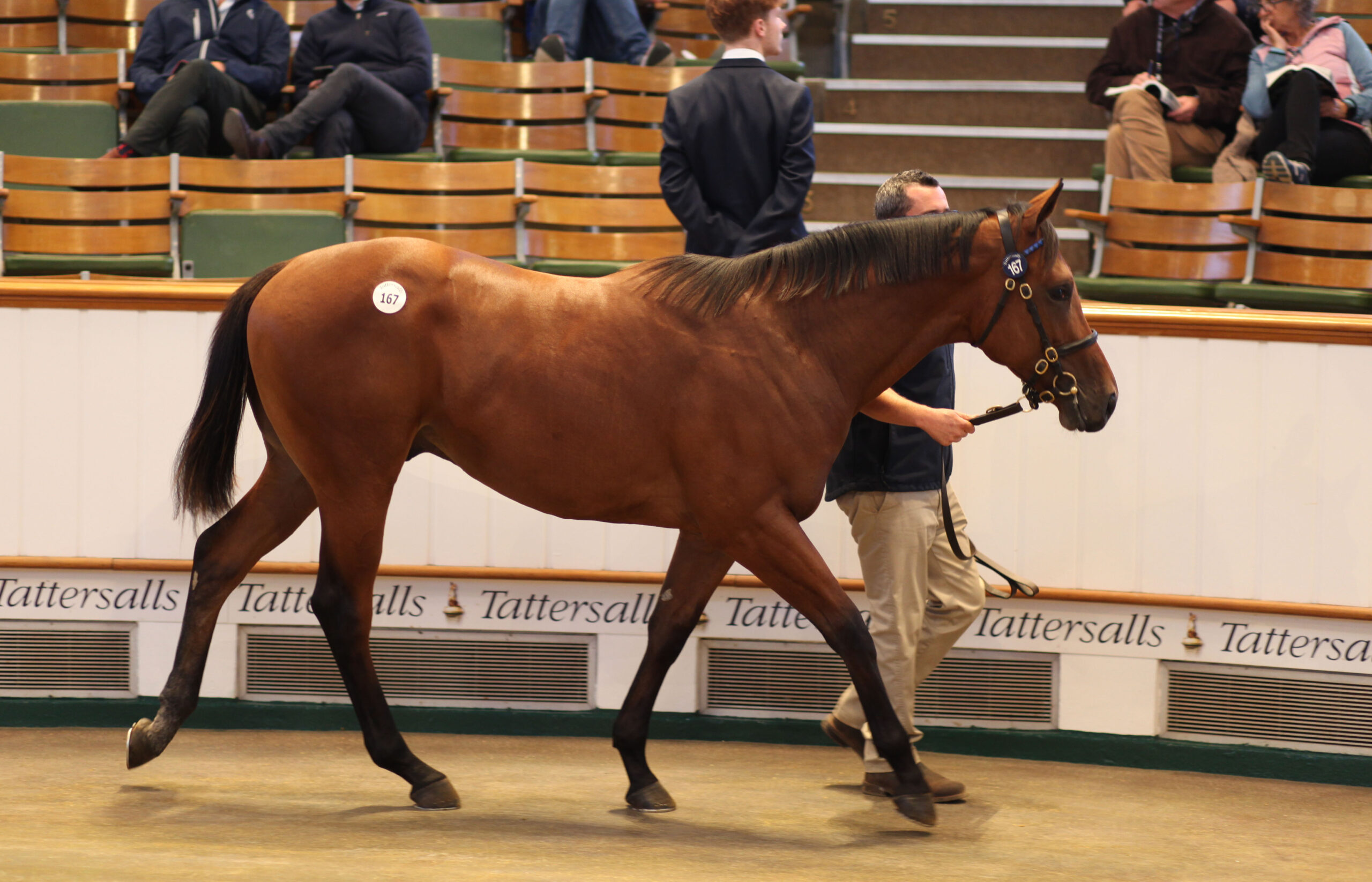 The high regard in which Sheikh Mohammed understandably holds Dubawi is well known and thus it was no surprise to see him come away with five yearlings by the stallion worth a total of 4.75 million guineas.

They included the second lot into the ring, a Dubawi filly out of Prix de la Nonette winner Jazzi Top from Meon Valley Stud who ensured the sale opened in great style when knocked down for 1,300,000gns.

A half-sister to dual winner Main Target, the filly boasts a page replete with Meon Valley-bred stars as a direct descendant of Reprocolor via the Irish Oaks winner Colorspin and her Group 1-winning daughter Zee Zee Top.

“It’s a good way to start the sale isn’t it?” said Stroud. “She’s a very attractive filly from very good farm. There’s not much more to be written about Dubawi is there? He’s such a fantastic stallion.

“The boss picked her out – he’s a had a lot of success with the family going back to Opera House and Kayf Tara.”

Godolphin’s haul also included Cheveley Park Stud’s Dubawi colt out of the 2017 Queen Elizabeth II Stakes winner Persuasive. The colt is the third foal out of his accomplished dam, a half-sister to top Godolphin sprinter Creative Force who also won the Atalanta Stakes and Sandringham Handicap for John Gosden. The daughter of Dark Angel is also responsible for two-time winner Persist while her second, Theoryofeverything, is also in training with Gosden.

“We bought Persuasive at the Goffs Orby Sale and it was the best €180,000 that we could have spent,” reflected Cheveley Park Stud’s managing director Chris Richardson. “I’m delighted for Mrs Thompson and I’m delighted for all the team at home. It’s nice to come to a top-class sale with a horse of that kind of quality. He’s been a gem from the moment he was born.

“It’s a family that keeps evolving. We’re grateful to Sheikh Mohammed for buying him – he knows the family well through Creative Force. We’re delighted and it’s very exciting.” 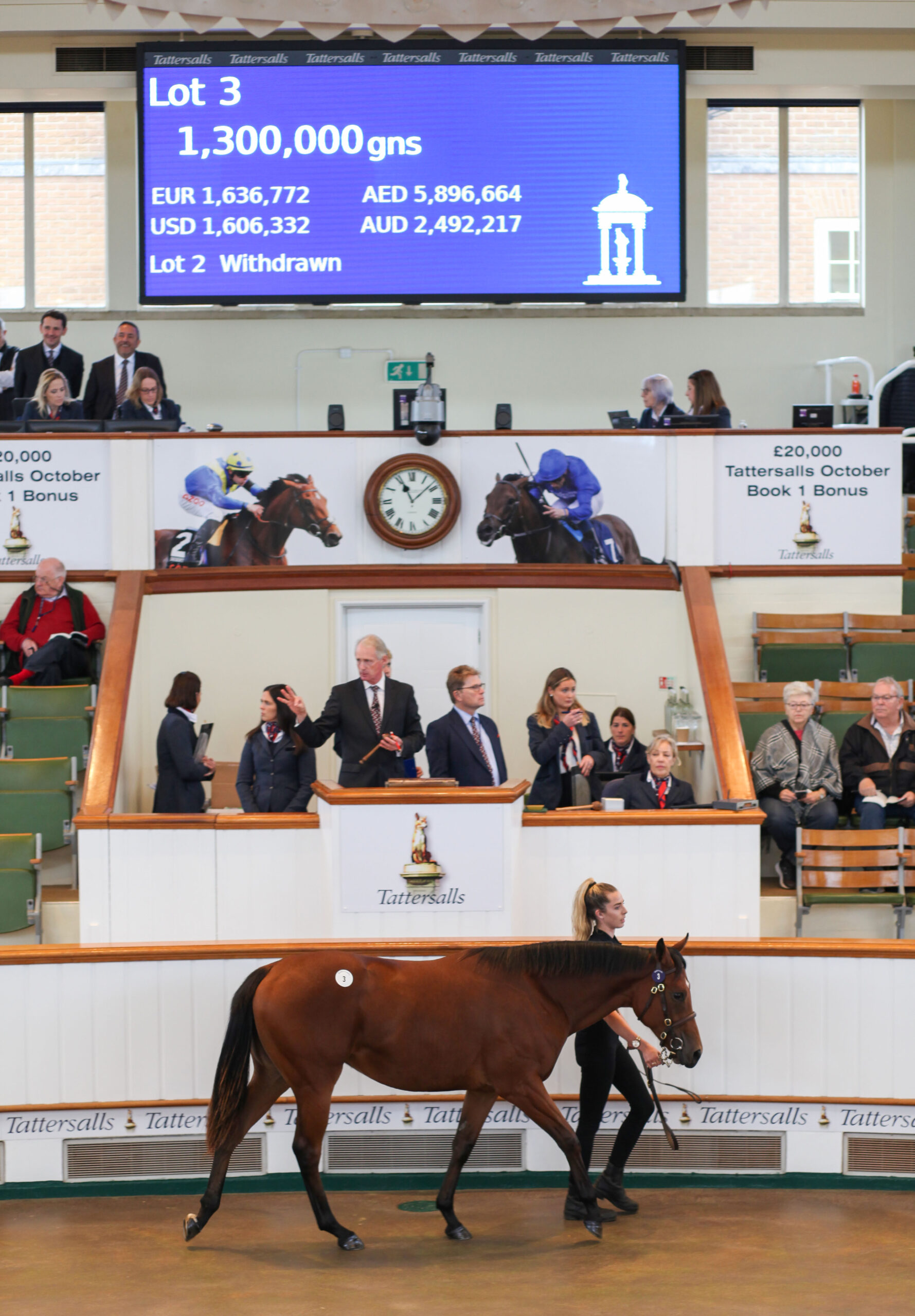 Shadwell Estate Company, meanwhile, made a welcome return to the fray, with Angus Gold outbidding Kieran Lalor of Al Shira’aa Farms and Hubie de Burgh for Watership Down Stud’s first foal out of the Middleton Stakes winner Lah Ti Dar. It’s an outstanding family that goes back to Lord and Lady Lloyd-Webber’s foundation mare Darara – a Group 1-winning half-sister to Darshaan – via her triple Group 1-winning daughter Dar Re Mi. As such, the filly is closely related to champion Too Darn Hot as well as the Group 1 winners Rewilding and Diaghilev.

“Sheikha Hissa is very excited to have bought a filly with a pedigree like that,” said Gold. “There’s an awful lot going on under the first three dams – they’re all stakes winners. It’s a family that has been very well nurtured by Watership Down Stud over the years.

“We’re looking to buy some pedigrees for the future. She was obviously one of the best bred fillies in the catalogue.”

He added: ”It’s Sheikha Hissa’s first trip to Tattersalls, and she’s been here looking at horses. I think she has really enjoyed it. People have been very kind and given her a big welcome.”

On a day where well-bred fillies commanded most commercial respect, a No Nay Never relation to Kingman also lit up the ring when selling for 780,000gns to Tina Rau, acting on behalf of Gestut Schlenderhan.

Sold by Camas Park Stud, the filly was bred by Ben Sangster out of Multilingual, a Dansili daughter of the Poule d’Essai des Pouliches heroine Zenda and therefore a half-sister to Kingman. The once-raced Multilingual was sold by Juddmonte to Ollie Sangster for $525,000 while in foal to Noble Mission at the 2019 Keeneland November Sale and not long after, produced the Summer Mile winner  Tilsit.

“Philip von Ullman is here and we all loved her,” said Rau. “She was the pick of the day and the sale for us. You can’t really argue with the pedigree. And she’s a queen, she walks for fun and is extremely well balanced. She’s got so much quality.”

The team added that the filly would head back to Germany and a trainer decided in due course.

The sale continues from 11am on Wednesday. 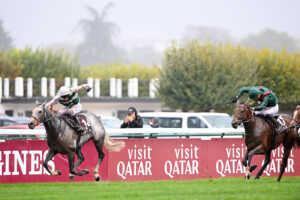 Up Next
Arc joy for Rausing, Prescott and Morris with Alpinista