Labelled as the biggest new attraction to emerge in the region for over a decade, the National Heritage Centre for Horseracing and Sporting Art opened it’s doors for the first time on Monday.

In what has been described as a ‘soft launch’, members of the public were able to see for themselves the culmination of ten years of planning, excavation and construction.

The five acre site is located in the heart of Newmarket just off the high street at Palace House in the remains of Charles II’s sporting palace and stables.

Palace House has been in the public eye having previously featured on Channel 4’s Time Team television programme featuring Phil Harding and Tony Robinson in 2011.

The centre comprises of three notable attractions. The first of these is the new home of the National Horseracing Museum in the Trainers House and Kings Yard Stables, where a statue of the mighty Frankel overlooks proceedings after it was gifted to the museum by His Highness Prince Khalid Abdullah last month.

The second is the first ever national gallery of British Sporting Art, which houses collections in the form of paintings, prints and sculptures representing a selection of sports. The final piece of the jigsaw is the live attraction and flagship home for the Retraining of Racehorses charity.

Former Grade 1-winning chaser Our Vic was the star feature on the opening day, greeting the first streams of visitors. The 18-year-old had previously been at the British Racing School after he retired from racing in 2010.

“Having three attractions in the one destination really opens the attraction up to a wider audience. There is something for everyone,” said Ami Cosgrave, Head of Marketing at the National Heritage Centre for Horseracing & Sporting Art.

“The new National Heritage Centre will be a fantastic asset to the racing industry, showcasing the incredibly rich history and heritage of the sport, the royal connections and the importance of the sport today. The focus on the thoroughbred as an athlete is also an important element and the chance to see live exhibits in the Rothschild Yard will be a huge attraction, especially to families.”

It is anticipated that the new Heritage Centre could bring an extra 50,000-60,000 visitors to the headquarters of British Flat racing annually, boosting the local economy by £2 million year-on-year.

From September 26, the King’s Yard galleries will be opened and on October 24 the whole site will be fully accessible to the public. 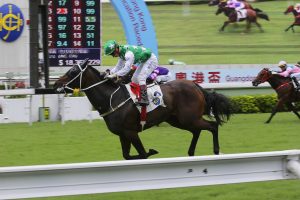 Up Next
Internet sensation dazzles at Sha tin