Pakistan Star won in breathtaking fashion for a second time

With hundreds of thousands of shares on social media from his scarcely believable debut performance, it is no wonder that the German-bred Pakistan Star is quickly becoming one of the most talked about thoroughbreds on the planet.

In almost a carbon copy of his maiden victory over six furlongs at the start of July, he came from a detached last-to-first to claim a first prize of £61,000 for connections in the Tseun Lok Handicap at Sha tin on Sunday.

The HK$6 million purchase from Hong Kong’s International Sale in March was stepping up to seven furlongs, which based on his debut run would certainly look to suit. The three-year-old missed the break badly under Matthew Chadwick and was two-lengths in rear at halfway, spotting the pacesetter Kingsfield over a dozen lengths.

As the field came into the stretch, Pakistan Star was switched to the wide outside by Chadwick who was the first jockey to become busy in the saddle.

In the final furlong and a half, the warm favourite showed a potent burst of acceleration which took him into the lead inside the final half furlong, scoring by a comfortable length and a quarter at the post from the former British-trained charge Marvel Hero.

Described as a ‘ripper’ by the on-course commentator, the son of Sharmadal who also sired one of Hong Kong’s favourite exports Able Friend, has now made it a spectacular two from two in his career for trainer Tony Cruz.

“That first day I got him, oh man, he really didn’t want to work, but he has changed so quickly – he has really changed in his character,” said Cruz.

“He was shy about everything; now, he is brave. He has got guts, this guy, and he clearly has ability.”

Pakistan Star completed the final 400m of yesterday’s contest in a time of 21.44s – which has only been bettered by one horse in Sha tin’s history, dual Group 1-winner Sun Jewellery.

Racing in the colours of Hong Kong-based businessman Kerm Din, the gelding is earmarked to take a rise in class when he next meets the racecourse which it is hoped will be over a mile at Sha tin on October 8.

Connections are hopeful they have a serious Hong Kong Derby contender on their hands which will be run at Sha tin on March 19 next year. 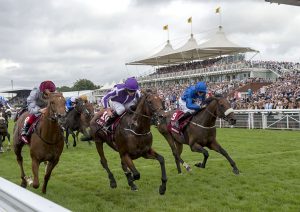 Up Next
ITV confirm 40 days on main channel