Thomas Darby and Sean Bowen dented some big reputations in the staying hurdle division with a clear-cut victory in the Grade 2 Long Distance Hurdle at Newbury on Friday.

Paisley Park, victorious in the 2019 renewal, was looking to get back on the winning trail in the three-mile contest and regular pilot Aidan Coleman sent the 2019 Stayers’ Hurdle hero to the front, tracked by On The Blind Side under James Bowen.

As Indefatigable, Lisnagar Oscar and Irish raider Mrs Milner came under pressure one by one, Thomas Darby was seen making smooth progress under Bowen, and the duo led approaching the final hurdle.

Paisley Park had no more to give on the run-in and it was left to the gallant On The Blind Side to chase home Thomas Darby, coming home two-and-a-quarter lengths adrift, with the Bowen brothers sharing a high five after passing the winning line. 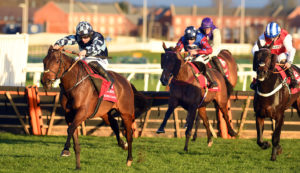 Thomas Darby and Sean Bowen clear away from their rivals to take the Grade 2 Long Distance Hurdle | Photo: Bill Selwyn

Eight-year-old Thomas Darby, trained by Olly Murphy for Diana Whateley, was securing his first success over three miles and looks a prime candidate for the Grade 1 Stayers’ Hurdle at the Cheltenham Festival in March.

John Stone’s four-year-old was a most fortuitous victor as first Pic D’Orhy and then Millers Bank crashed out, allowing the Dream Well gelding to come home 30 lengths clear of the disappointing Tea Clipper.

JP McManus splashed out £570,000 on Jonbon, a full brother to brilliant chaser Douvan, after he blitzed his rivals in an Irish point-to-point last year, and the five-year-old made the perfect hurdling debut with an easy success in the extended two-mile maiden contest under Aidan Coleman. 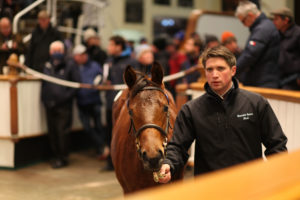 Up Next
Momentous result for Genesis Green in 1,800,000gns Dubawi colt