The Tattersalls sale ring played host to one of the greatest clashes of recent years at the December Foal Sale on Friday as Godolphin and Coolmore went head to head on a well-related son of Dubawi from Genesis Green Stud.

Matters swiftly escalated beyond the million guinea mark as the colt became the subject of a battle between Anthony Stroud, bidding from outside on behalf of Godolphin, and MV Magnier, standing inside the ring. Magnier briefly appeared to have sealed the deal with a bid of 1.7 million guineas but upon Stroud’s return of 1.8 million guineas, he cried enough and the colt thus was knocked down at a level that made him the most expensive foal sold in Europe for the best part of two decades.

The result was a momentous one for the Swinburn family’s Genesis Green Stud, which bred the colt out of Madonna Dell’Orto, also the dam of high-class miler I Can Fly and Listed scorer Viscount Barfield.

“I didn’t think we’d have to go that far,” said Stroud. “But he’s a lovely horse with a great page from a great farm. Obviously he’s by Dubawi, who’s had another great year – you just need to look at the Breeders’ Cup [where Dubawi sired three winners]. He’s a very special stallion.

“The Boss said go for it. Huge respect to the underbidders – we are very lucky to have the horse.” 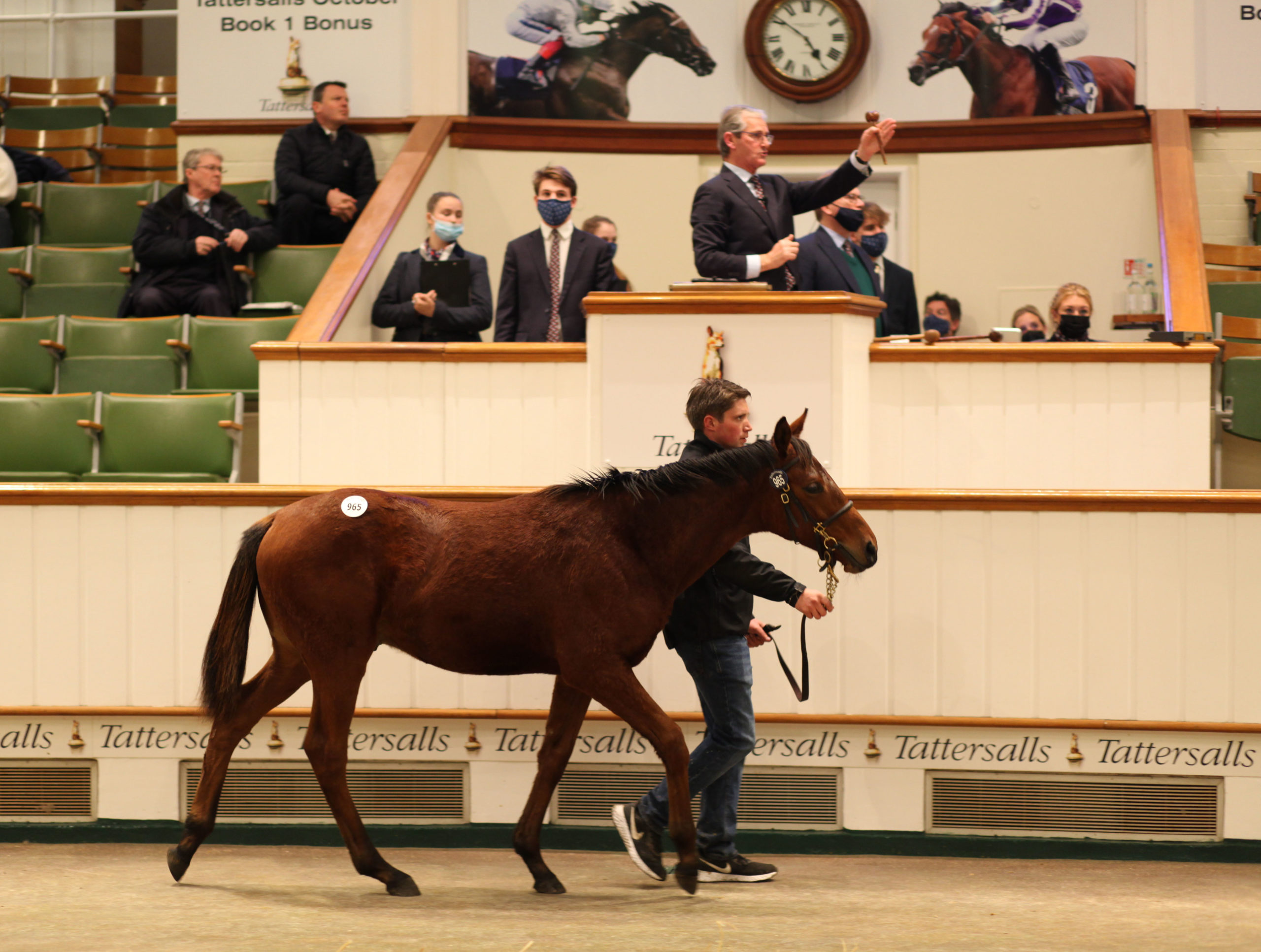 The most expensive foal to sell in Europe since 2002. Photo – Tattersalls

At 1.8 million guineas, the Dubawi colt becomes the joint second highest priced foal ever sold in Europe and the most expensive since My Typhoon, a Giant’s Causeway half-sister to Galileo and Sea The Stars, made 1.8 million guineas to Charlotte Weber’s Live Oak Stud in 2002.

The record is held by Padua’s Pride, a brother to Generous who sold for 2.5 million guineas to Joss Collins of the BBA on behalf of Satish Sanan in 1997.

An emotional Michael Swinburn of Genesis Green Stud took the opportunity following the sale to pay tribute to his team at home as well as his late brother Walter, who passed away in 2016.

“I just wish Walter was here to see this,” he said. “He trained the dam and this colt’s half-sister I Can Fly was one of the last good horses we bred that he was aware of, and he was over the moon.

“I remember buying the granddam Sabria at a sale here with Oliver St Lawrence and coming home and getting an earful off Mum and Dad for buying her. Walter bailed me out on her at 25,000gns and she’s been fantastic for us, her family has basically built the farm.”

Sabria, an unraced daughter of Miswaki, went on to breed the ill-fated Classic-winning miler Landseer as well as Listed winner Ikhtyar and Sabreon, the granddam of Japanese Group 1 winner Mikki Rocket. Her Montjeu daughter Madonna Dell’Orto was placed three times for the Swinburns and as outlined above, has excelled herself at stud. The Dubawi colt is her eighth foal.

“She’s just been a wonderful mare,” said Swinburn. “She throws to the stallion every time, and a good version of the sire. I always thought Dubawi would suit her because of her size. We were a fan of his from the start, and when I Can Fly came up, I contacted Liam O’Rourke at Darley to discuss the possibility of a foal share and here we are.”

He added: “It’s a great team effort from everyone at home. We could have sold him as a yearling but it’s one more year to keep him in one piece. I remember we were getting a lot of money for Landseer’s brother a long time ago and we had a thunderstorm the next day and when we went out in the morning, he had broken his leg. It just shows how hard it is for breeders – it’s so hard to get one with a pedigree, the physical, the x-rays and then through the scopes. I just hope he comes up lucky for Sheikh Mohammed.” 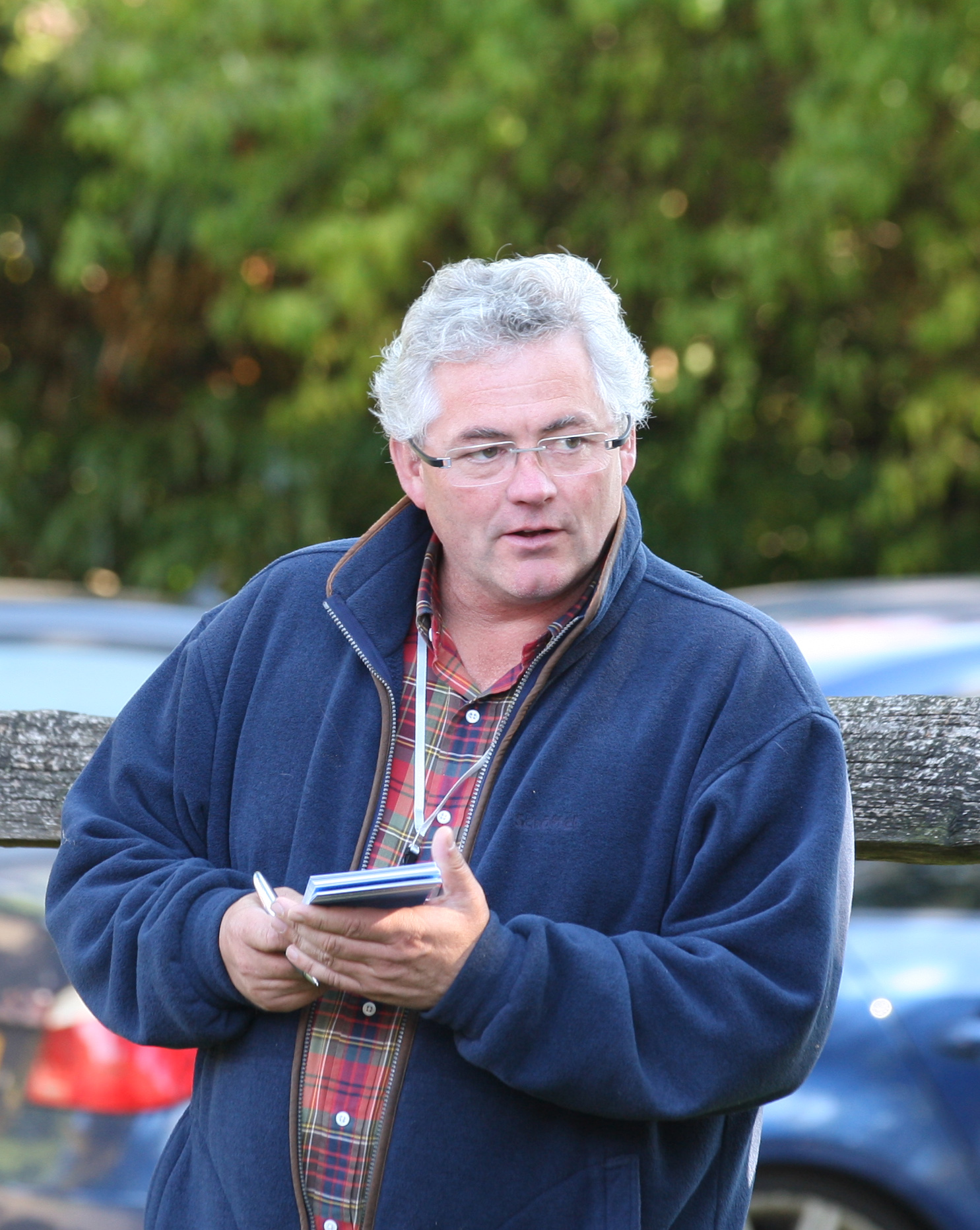 Michael Swinburn: “I wish Walter was here to see this’. Photo – Tattersalls

A wonderful result also came the way of breeders David and Trish Brown of Furnace Mill Stud in the sale of their Frankel colt for 675,000gns to MV Magnier.

The Browns bred the colt out of Whatami, a Daylami granddaughter of blue hen Eljazzi who has done plenty to uphold the family tradition herself as the dam of Group 3 winner Nkosikazi to Cape Cross and Listed Wolferton Stakes winner Juan Elcano to Frankel.

A packed sale ring greeted the well-grown youngster and once Gay O’Callaghan, Michael Donohoe and Timmy Hyde, standing with MV Magnier in the gate, had shown their hand, matters came to rest between Simon Mockridge of Juddmonte Farms, sitting with Barry Mahon, and Magnier, who ultimately came out on top with a nod of 675,000gns.

“He’s a very nice horse who’s very good-looking and a brother to a good horse as well,” said Magnier. “David and Trish Brown are very good breeders and we’ve known them a very long time so I’m delighted to be able to buy this horse from them.

“Sadly David couldn’t be here today but hopefully he’ll be happy with that result.”

For Furnace Mill Stud, it was a true family affair since the colt was led up by the Brown’s granddaughter Emily May. As Magnier noted, David was sadly unable to attend but Trish was on hand to enjoy the moment.

“It is fantastic, worth all the sleepless nights,” she said. “He has been brilliant all the way through and it was lovely to see him making that money.

“We bought the mare here as a three-year-old for 25,000gns from New England Stud and she has been a star.

“We bred Juan Elcano by Frankel, and it was obvious to go back to him again. We felt the mare deserved the chance. We have had three by him and they have all been wonderful horses to deal with.” 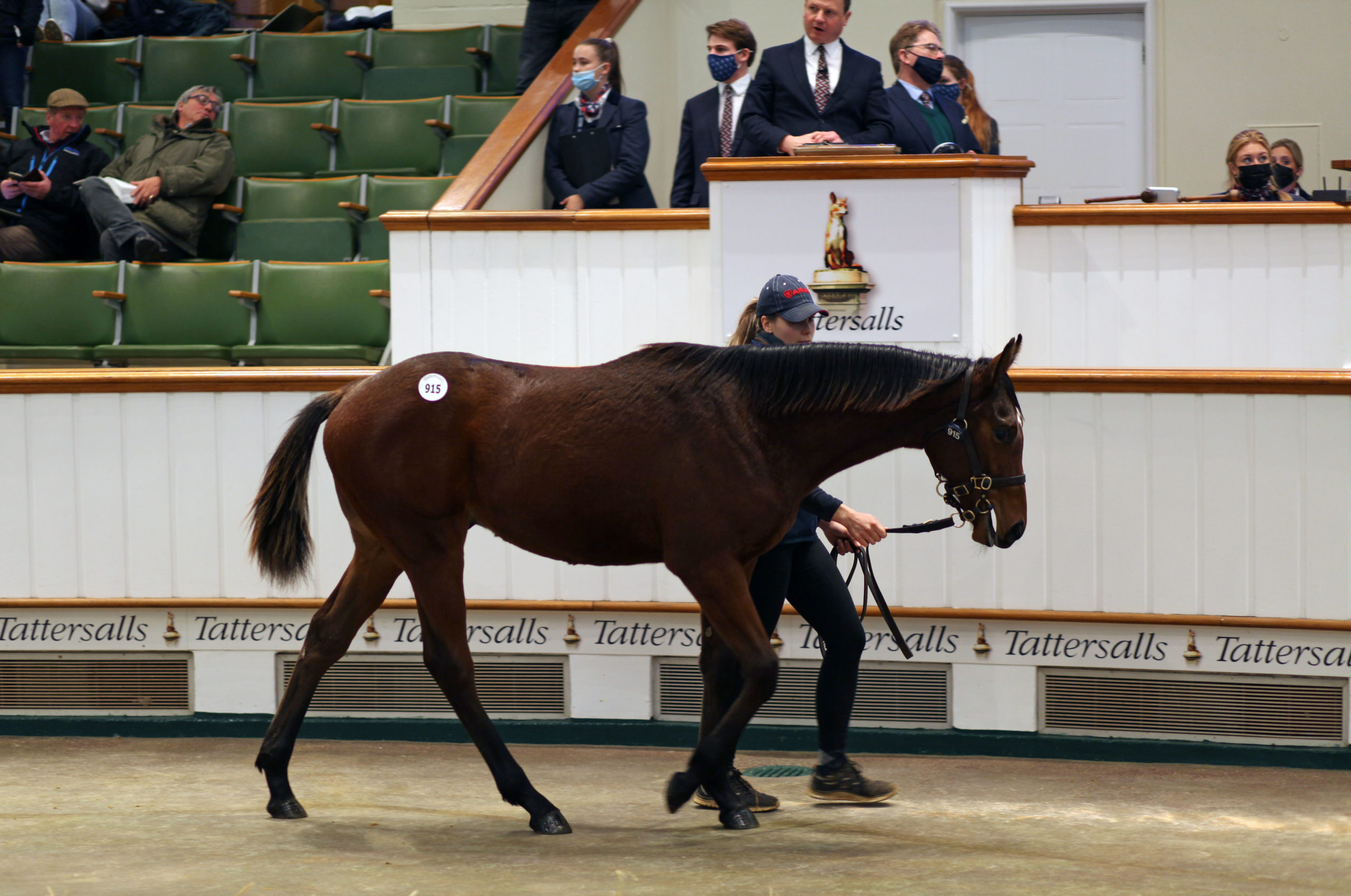 This Frankel colt was snapped up for 675,000gns by MV Magnier. Photo – Tattersalls

Sea The Stars in vogue

Meanwhile, a strong day for Sea The Stars was topped by the sale of a filly out of the Group 3-placed Frankellina for 650,000gns to Tom Goff of Blandford Bloodstock.

Offered by Hascombe & Valiant Stud, the filly was bred on a foal share and is set to return to her birthplace as the full property of her breeder, Anthony Oppenheimer.

The filly is the first foal out of her dam, a daughter of Frankel from Oppenheimer’s successful Nuryana family.

Patrick Cooper of the BBA Ireland wound up as underbidder on that filly but he went on to have better luck in his pursuit of Brightwalton Stud’s filly out of Incharge, a Kingman half-sister to Group 1 winner Poet’s Word who cost 350,000gns.

Cooper was acting on behalf of David and Vimy Ackroyd for the filly, who was sold through Barton Stud.

“Obviously we missed out on the last one,” he said. “But this one was coming along right behind – hopefully she will be the fastest!

“The top end fillies are the Sea The Stars and the Frankels, so that is why we ended up bidding on two by the stallion. She will go from here to Copgrove Stud and then on to Ralph Beckett when she is ready to go into training.”

He added: ”If you buy a yearling the horse goes straight to the trainer or the breaking yard, so the owner never really gets to know the horse. The Aykroyds live next to Copgrove so they can spend a year getting to know the horse before she goes into training. They can get to know the individual and they will spoil her rotten!” 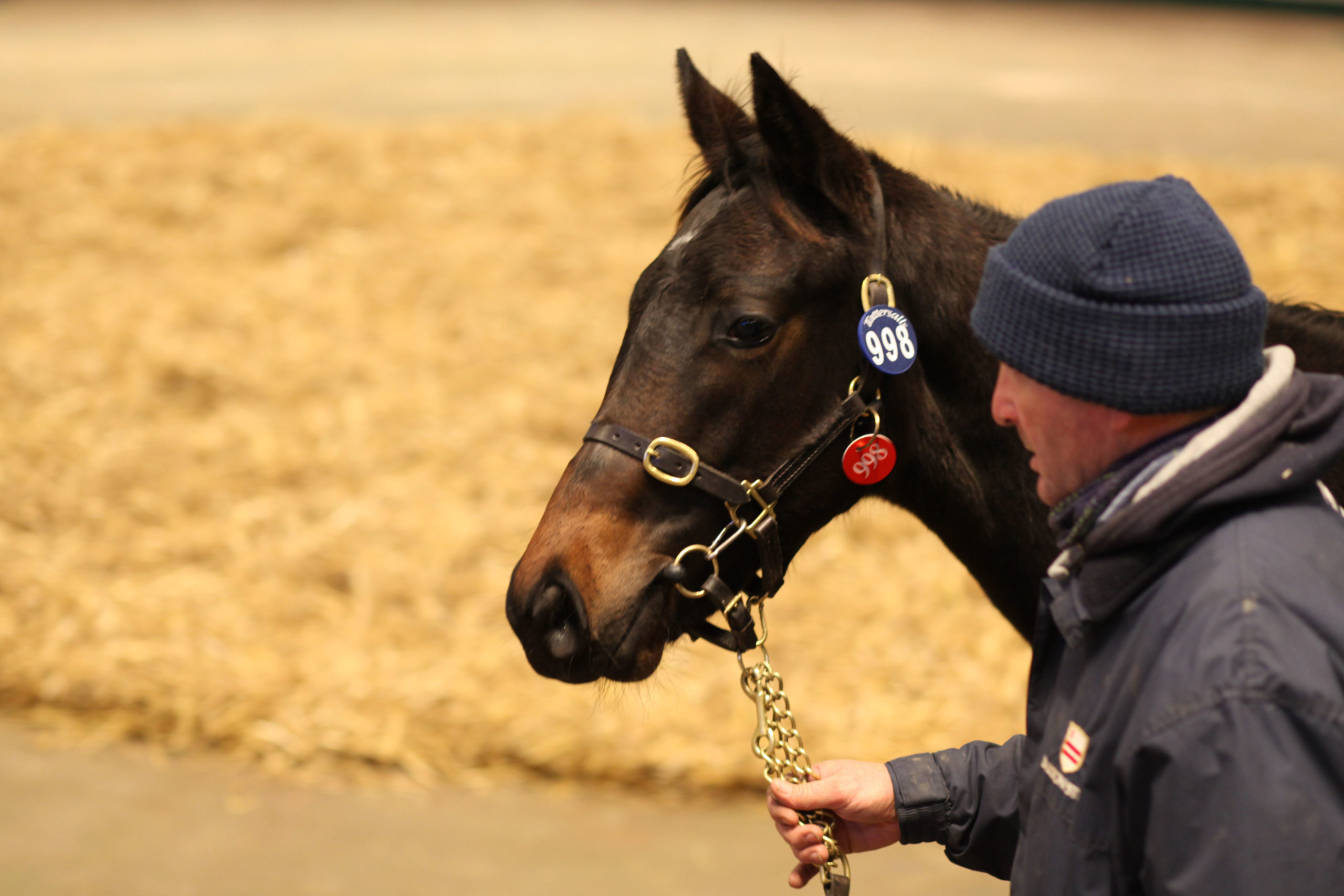 This Sea The Stars filly will race for David and Vimy Ackroyd. Photo – Tattersalls

Sea The Stars was also represented by a daughter of proven producer Sahel, for whom Gestut Fahrhof went to 350,000gns.

Bred by Harriet Loder and sold through Marwell Park, she is a sister to Group 3 winner Soudania and also a half-sister to the Group 1 Premio Lydia Tesio scorer Sortilege.

On a day where end users were in greater evidence, a pair of 300,000gns youngsters were others to hit elite heights with an eye towards their racing rather than commercial potential.

“He’s for an end user,” said Donohoe. “Obviously Lope De Vega has been very lucky for me [as the sire of Group 1 winner Lucky Vega, bought by Donohoe as a yearling] and compared to what some of them were making as yearlings, we thought he was value.

“He’ll go back to Norelands Stud we’ll get him broken next year and then decide where he goes.”

He added: “We’re not chasing foals but we’ve followed some through just in case they fell within our range.”

Tom Goff also went to 300,000gns for a first-crop daughter of Blue Point out of Listed winner Indigo Lady from Ringfort Stud. The mare has been a real money spinner for the partnership of Derek Veitch’s Ringfort Stud and Paul Hancock, with her foals realising a total of 1,400,000gns at this sale since 2017. The list includes Indie Angel, a 600,000gns purchase at this sale by Capital Bloodstock on behalf of Cheveley Park Stud who won this year’s Duke Of Cambridge Stakes at Royal Ascot.

“She’s for a client to race,” said Goff of the filly, the first ever foal born by her sire. “She was an absolutely gorgeous filly, a queen. Obviously she’s by a first-crop sire but she’s a belter and a half to a very good filly in Indie Angel, who I have been following closely.

“I’ve seen a few Blue Points, everything here and some on the farms, and she’s the best. He wasn’t just a very good older sprinter – he won the Gimcrack as well – so he was the real deal. He must have a fantastic chance as a stallion.” 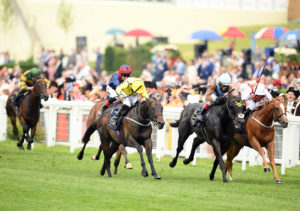 Up Next
Richard Brown named FBA Agent of the Year