Son of Siyouni takes Group 1 feature on the Rowley Mile

St Mark’s Basilica led home a one-two for Aidan O’Brien and Coolmore in the Group 1 Dewhurst Stakes at Newmarket on Saturday.

The success came a day after O’Brien’s runners, Mother Earth and Snowfall, had carried the wrong jockeys and number cloths in the Group 1 Fillies’ Mile, which has now prompted an investigation into the incident, with a possible disqualification looming.

As front-runners Devilwala, Cadillac and Fivethousandtoone began to drop back through the pack, St Mark’s Basilica under jockey Frankie Dettori made eye-catching progress to take the lead a furlong from home.

In pursuit was stablemate Wembley, who edged left as the race entered the closing stages but could make no impression on St Mark’s Basilica, who crossed the line three-quarters of a length ahead, with a length and three quarters back to Joseph O’Brien’s Thunder Moon in third.

St Mark’s Basilica’s reversed form with Wembley and Thunder Moon having finished third behind the pair in the Group 1 National Stakes at the Curragh last month.

It was the second victory in the race for Dettori, who had gained his first aboard Too Darn Hot in 2018, and he said: “They went fast. I was in the middle of the group and I got all the splits. In fairness when I asked him to go, he went, and he never stopped.

“He didn’t put a foot wrong. His form is good, and he didn’t have much to find on the second and third and it all worked out well. He would get a mile no problem.”

O’Brien added: “We’re delighted with both of them. The plan was that St Mark’s Basilica would run in France and then Wembley would run in the Dewhurst, that’s the way we were going.

“The first three were the same three as in the National Stakes. Every year it’s a great race and the form always stands up.”

The winner is another feather in the cap of the Aga Khan Stud’s Siyouni, sire of last weekend’s Prix de l’Arc de Triomphe hero Sottsass, and St Mark’s Basilica is the fifth top-level scorer that the son of Pivotal has supplied since retiring to stud.

Siyouni is responsible for the other Group 1 winners Dream And Do, Ervedya and Laurens. He stood the 2020 breeding season at an unchanged fee of €100,000.

The long-serving Chairman of Moonee Valley racecourse, Scarborough secured the Group 3-winning Cabaret from the Coolmore broodmare band and his decision has rewarded him with strong results in the sales ring.

It was at last year’s Book 1 of the Tattersalls October Yearling Sale that MV Magnier went to 1,300,000gns to secure St Mark’s Basilica, having bought Magna Grecia for 340,000gns as a foal.

At this week’s Book 1 sale, a full-brother to St Mark’s Basilica was offered by Norelands Stud, where Scarborough boards a handful of mares, but he was bought back for 650,000gns. After Saturday’s result it will be interesting to see if Scarborough decides to race the yearling himself or if someone moves to secure the colt in a private deal.

Great White Shark showed an abundance of stamina in this year’s Cesarewitch as he powered clear to win the 2m2f handicap, providing trainer Willie Mullins with a third successive victory in the staying contest.

Partnered by Jason Watson, the grey hit the front a furlong from home and stayed on strongly to defeat Summer Moon by three lengths, with Takarengo half a length away in third.

Watson said: “We struggled to travel early on, but she loves passing horses and we had to bide our time as much as we could.

“Thank you to connections and Willie for putting me back up on one of his great horses. In a race like this you need the opportunities to ride for the likes of Willie and I’m grateful the opportunity arose on Monday.”

In the Group 3 Zetland Stakes (1m2f), the Martyn Meade-trained Lone Eagle was an impressive front-running winner, while One Ruler earmarked himself as a colt to follow next season when taking the Group 3 Autumn Stakes (1m) for trainer Charlie Appleby and jockey William Buick.

The Group 3 Darley Stakes was won by 28-1 shot Lady Wannabe, while the Listed Boadicea Stakes went the way of Henry Candy’s Jouska. 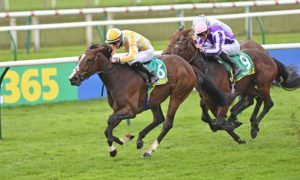 Up Next
Pretty Gorgeous takes the Group 1 Fillies’ Mile