There was a first Group 1 success for jockey Shane Crosse on Friday as he partnered the Joseph O’Brien-trained Pretty Gorgeous to victory in the Fillies’ Mile at Newmarket.

Crosse had been unfortunate to miss what would have been a winning ride aboard Galileo Chrome in the St Leger last month after testing positive for coronavirus but he made up for that disappointment on the Rowley Mile.

Pretty Gorgeous, who was a non-runner in last week’s Prix Marcel Boussac due to contaminated feed, was pushed along by Crosse to begin her challenge two furlongs from home.

The Mark Johnston-trained Dubai Fountain, who had led for the majority of the race, was soon challenged by Pretty Gorgeous, and the daughter of Lawman found plenty to hold off Indigo Girl, scoring by half a length, with Mother Earth back in third.

Crosse said: “Unbelievable! It’s crazy coming here getting these rides. A big thanks has to go to Joseph and the whole team, I’m just so lucky to have the role I have in such a big operation. There might not be a crowd here but I’ll take it all in.

“I had an okay position but as she’s so big, she didn’t come down the hill all that great. Once I got her balanced she did it well.”

O’Brien added: “Very impressed, delighted for everyone at home. She’s an outstanding physical specimen and from the first day she worked, she’s been impressive at home and hasn’t disappointed here.

“It’s likely that she’ll be put away now and trained for the Guineas next spring. She’s very good, top class, and proved that today. I’m delighted for Shane. He’s been with us for a long time and he’s a very, very good rider.”

The two-year-old becomes the sixth Group 1 winner for Lawman alongside Harbour Law, Just The Judge, Law Enforcement, Marcel and Most Improved.

Bred by Haras du Cadran et al, Pretty Gorgeous is out of the winning Compton Place mare Lady Gorgeous and is a half-sister to the Listed scorer Alwaab.

After the race it emerged that Aidan O’Brien’s two runners, Snowfall and Mother Earth, given as finishing third and eighth, had carried each other’s number cloth and intended jockey, meaning that Mother Earth had actually finished third (under James Doyle) and Snowfall eighth (under William Buick). A stewards’ enquiry will be held before Saturday’s racing.

Also at Newmarket on Friday, Ballylinch Stud’s first-season sire New Bay was represented by a new stakes winner when the Jane Chapple-Hyam-trained Saffron Beach followed up her debut success 13 days ago with a gutsy win in the Group 3 Oh So Sharp Stakes.

There was a treble on the day for King Power Racing and Silvestre de Sousa, which kicked off with Tim Easterby’s promising Winter Power landing the Group 3 Cornwallis Stakes. That was followed later in the afternoon by an impressive success for the Andrew Balding-trained Happy Power in the Group 2 Godolphin Stud & Staff Awards Challenge Stakes, while Angel Power, trained by Roger Varian, captured the final race on the card, the Group 3 Darley Pride Stakes. 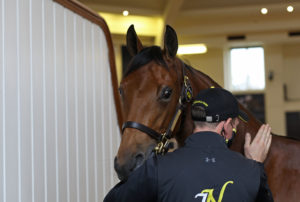