Day two of the Punchestown Festival witnessed a true feast of a race in the feature, the Coral Punchestown Gold Cup.

Cheltenham show-stopper Sizing John wrestled a narrow victory to add a third Grade 1 to his resume over fences.

Coneygree, who was having just his second run of the season, set a good gallop as was expected beforehand.

The favourite, in the familiar winning silks of Ann and Alan Potts, tracked through the Willie Mullins-trained Djakadam for much of the three mile trip.

As the leader re-injected the pace turning for home his main market rivals made headway.

Djakadam and Sizing John went on after the second last capitalising on an error from the Bradstock charge.

Ruby Walsh and Djakadam narrowly touched down in front after the final flight despite knuckling on landing.

Yet the Gold Cup winner fought back strongly on the run-in taking the spoils by a short-head under man of the moment Robbie Power.

“There was no hiding place out there, as it was expected with Coneygree in the field,” reflected Power.

“He felt a bit flat today to tell you the truth. He had a hard race in Cheltenham and credit to the horse he’s only a seven-year-old, he’s come back out and when he had to dig deep he did.

“He’s earned a good break for the summer.”

A son of the late Midnight Legend, Sizing John completes a phenomenal Grade 1 brace of wins over fences which began with the Irish Gold Cup back in February.

He’s earned a good break for the summer

His trainer Jessica Harrington, who is also in a rich vein of form under both codes, tastes her first victory in this race continuing what has been a magnificent season.

Harrington said: “It was a proper race they went a hell of a gallop from the flag fall.

“Everything was going against him and he put his head down and battled and he just showed sheer guts.” 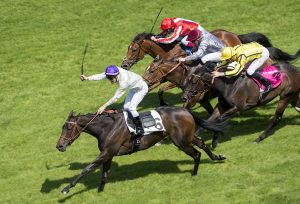 Up Next
Unbeaten French superstar retired