Jessica Harrington etched her name onto the most prestigious prize of them all the Timico Cheltenham Gold Cup with Sizing John, her first ever runner in the race.

A runner-up to Douvan on five occasions, the seven-year-old adopted a position in midfield under Robbie Power who was seeking a second win of the week.

The Hennessy winner Native River led on the downhill run to the fourth last pursued by favourite Djakadam and Ruby Walsh.

Cue Card took a crashing fall three out, almost a carbon copy of 12 months ago. Meanwhile, Sizing John made headway in behind the front two.

He was angled out by Power coming to the second last and a fluent leap saw him go on. After winging the last Sizing John kept up the gallop holding runner-up Minella Rocco at bay by just under three lengths.

“Unbelievable. I’ve had a lot of confidence in this horse since the first day I rode him behind Douvan I thought all he does is stay,” reflected Power.

“Every Gold Cup winner has Grade 1 form over two miles and he had it. I ended up jumping my way to the front at the second last and I did want to jump to the front until the last but when I was there I had to keep going.”

For Power, a Grand National winner in his own right, he takes the first Cheltenham Gold Cup of his career on what turned out to be a red letter week.

He ended his six year Cheltenham Festival hiatus on Wednesday when Supasundae won the Coral Cup for the same owners Ann and Alan Potts.

Harrington said: “Beginners luck! He was the first runner I had in the Irish Gold Cup at Leopardstown and he won that.

“He looks like a three mile chaser he doesn’t look like a two miler. It is the jewel in the crown. It has not really sunk in yet, I can’t believe it is true. I am sitting here, I am about to wake up and it hasn’t happened.”

Earlier in the afternoon, the Philip Hobbs-trained Defi De Seuil ran out an impressive winner of the JCB Triumph Hurdle.

I’ve had a lot of confidence in this horse

In the hands of the champion jockey, the four-year-old travelled well to lead on the run to the last and kept on nicely to beat the Gordon Elliott-trained Mega Fortune by five lengths.

Willie Mullins notched his sixth victory of the Festival courtesy of Penhill who ran out a convincing winner of the Albert Bartlett Novices’ Hurdle.

The son of Mount Nelson was ridden with restraint by Paul Townend but came through with a strong challenge in the closing stages and went clear to win by three and a half lengths. 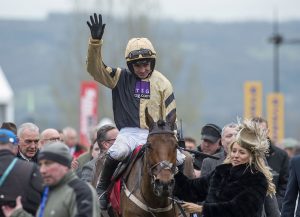 Up Next
Resurgent Walsh claims Stayers'