Nina Carberry’s homebred daughter of Champs Elysees was the star of the show at the Tattersalls Ireland August Hunt Sale on Thursday when selling for €50,000 to Jeremiah McGrath.

Offered through Carberry’s Broad Meadow Stables, the three-year-old is out of the winning Hawk Wing mare Jeunopse and is a half-sister to the point-to-point winner Crypto Currency and three-time bumper runner-up Game On For Glory.

Game On For Glory is trained by Lucy Wadham for owner James Summers and McGrath revealed in the aftermath of his purchase that the new addition is heading to be trained by the Newmarket handler.

He said: “This is a well-bred filly. Lucy has the Fame And Glory half-sister Game On For Glory, who finished second in a bumper at the Cheltenham April meeting and they think a lot of her.

“This is a cracking model with some size and scope. I have ridden a few by the sire, but they were mainly the types bred for the Flat who went jumping.”

As the only lot on offer by Davidoff, best known as the sire this year’s Grade 1 Aintree Hurdle hero Abacadabras, it was no surprise to see Haras des Loges’ gelding attract plenty of attention when he walked into the ring.

Shark Hanlon was among those to make a play for the brother to the ten-time French winner Intrinseque but ultimately it was agent Bobby O’Ryan who walked away with the youngster on a bid of €40,000.

O’Ryan said: “He is just a very nice horse, a lovely athlete. He is a full-brother to a good horse and he goes to Gordon Elliott.”

Ian Hanamy of Haras des Loges added: “I bought him as a foal from a neighbour, we only arrived on Sunday evening and he was vetted straight away – he is a tough horse to do all that within 25 hours of leaving home and not turn a hair.

“We usually sell as two-year-olds, but from an early stage we knew this horse would need the May grass, so we targeted this sale for him. He is a super walker and has a great head on him, there is everything to like about him and he stood out. I think this is a really good horse, and the thing about this horse is he will be able to run next year.

“He is only the third horse I have sold to Bobby and the first two have won – hopefully this horse will keep up the perfect strike-rate!”

Thursday’s session also saw a daughter of Yeats from Grange Stables snapped up by Tommy Redmond for €34,000.

A half-sister to the winners Royal Moll, Glenwood Prince and Ballygomartin, plans call for the three-year-old to ply her trade in the point-to-point sphere. 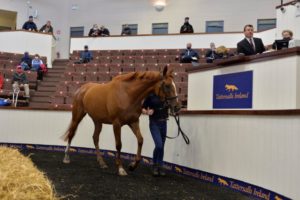 Up Next
Colreevy owners strike at €50,000 for Flemensfirth filly