Sunnyhill Stud’s daughter of Flemensfirth was the star act at the inaugural Tattersalls Ireland July Store Sale when selling to Michael Tobin for €50,000 on Wednesday.

Tobin was acting on behalf of Niall Flynn and his family who have tasted success with their own daughter of Flemensfirth in the shape of homebred Colreevy, the winner of three Grade 1s.

As Colreevy looks set to join the Flynn’s broodmare band, the Flynn family secured Sunnyhill Stud’s offering who is out of the King’s Theatre mare Princess Gaia and is a sister to Hatton’s Grace Hurdle scorer Voler La Vedette. She is also a half-sister to the dam of Shishkin, winner of the Grade 1 Supreme Novices’ Hurdle and the Grade 1 Arkle Challenge Trophy.

Tobin said: “She has been bought as a racing and breeding prospect on behalf of Niall Flynn and his family.

“She is a lovely model with a good mind, a good Flemensfirth. The pedigree speaks for itself and the first dam is still breeding so there is more to come, hopefully. A trainer has not yet been decided.”

Another to find favour in the ring was Springhill Stud’s Saint Des Saints filly out of the Milan mare Milanteea, who was bought by agent Matt Coleman for €45,000.

He said: “She is for Semore Kurdi, who is based in the north of England. She will go back to the farm and be turned out for a year before coming in to be broken.

“Semore was particularly after a Saint Des Saints filly to race and then breed from and this is a lovely, good moving, racy filly. Her dam is a half-sister to the Grade 1 winner Identity Thief, and Saint Des Saints is a phenomenal sire and is a very good broodmare sire too.”

The session’s top gelding was Boardsmill Stud’s son of Crillon who was bought by Colin Bowe’s Milestone Bloodstock for €43,000 to offer as a point-to-point prospect in the future.

Tattersalls Ireland Chief Executive Simon Kerins said: “It was a shame that the new July Store Sale didn’t get to take place on its original date, but we are very pleased with the trade that has been achieved throughout the day and we would like to thank all vendors and purchasers for their participation.

“It has been encouraging to see so many people descend on Fairyhouse and to see strong demand with a clearance rate of 68% and some good prices. We firmly believe that this sale has a big future, and we look forward to following our graduates on the track as they fly the flag for the July Store Sale.” 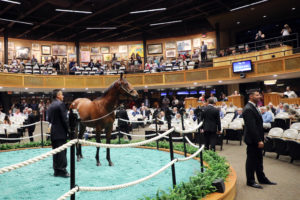