After an initial training period in Beijing, the students will take up placements in England, Ireland, America, Australia and Japan for 11 months and will be given the opportunity to gain hands-on experience at a range of studs and training yards run by Darley in the different countries.

Matt Hill, a former Assistant Manager at Dalham Hall Stud in Newmarket who has also worked for Darley in Japan and recently as Stud Manager of the operation’s Northwood Park Stud in Seymour, Victoria, has been appointed the Training Manager for the course.

Jalil stands for Darley at Lisui Farm in Beijing

He said: “The response to the internships has been excellent. More than 750 Chinese university graduates applied for the programme and we interviewed 109 highly credentialed and incredibly impressive young people. We very much look forward to the first group of interns joining us in August.”

Sheikh Mohammed’s interest in nurturing young talent in the global racing and breeding industry was first evident via his establishment of the popular Darley Flying Start course in 2003, which is open to students from around the world. Graduates of the two-year programme include up-and-coming French trainer Francis-Henri Graffard, bloodstock agent Matthew Coleman and Kevin Sommerville, who has played a key role in the new Cape Thoroughbred Sales company in his native South Africa after leaving Juddmonte’s nominations team last year.

This new course aimed specifically at training young members of a nation with emerging interests in thoroughbred racing and breeding follows on from the announcement last year that Darley would stand the Group-winning stallions Jalil and Sousa, sons of Storm Cat and Galileo respectively, at stud in China. 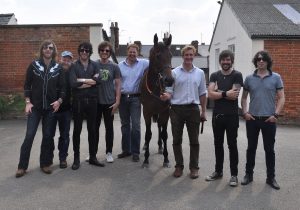 Up Next
Rock ‘n’ roll for Walker and Russell