It’s been a big week for two-year-old filly Sound Of Guns. Not only did she win comfortably on her second start at Yarmouth but the following day she received a visit from the rock band with whom she shares a name.

“It was a bit surreal, but also a bit of fun and a pleasant diversion from normal work,” said the filly’s owner Howard Russell of Swynford Paddocks Stud just outside Newmarket.

“They are a hard-working young group who somehow found time to come and see us after winning a total of £48 on the filly the previous day. Maybe a few racing fans could be encouraged to pop to iTunes to support them – racehorse owners of the future are only one successful album away!”

The five members of Sound Of Guns, who are currently touring with The Stereophonics, dropped in at Ed Walker’s Authorized Yard at St Gatien Stables in Newmarket before playing later that evening at The Corn Exchange in Cambridge.

Russell and Walker were both given VIP tickets to see the show but the young trainer and stud manager clearly put their work – with its routine early morning starts – before pleasure as they left before The Stereophonics appeared on stage, with Walker tweeting: “Nobody could work out why we were leaving before the main act! Late night!”

Sound Of Guns have recently released a new single, called Antarctica, which was iTunes ‘Single of the Week’ earlier this month. Their namesake is proving yet another horse to follow from Walker’s burgeoning string and will be back out later this season.

Russell, who bought Sound Of Guns privately as a foal with this father and named her after a painting by Lady Butler entitled ‘Within Sound of the Guns’, added: “The filly came out of the race well and will be rested for a while as she is still maturing. We will possibly be aiming her for some black type in September.” 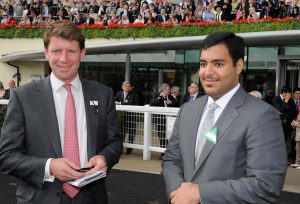 Up Next
Champions' Series prize-money boost