The achievements of 2019’s Royal Ascot-winning breeders were celebrated on Friday at the Berkshire course on the first day of the QIPCO King George weekend.

Winning breeders were given a commemorative Garrard Strawberry Dish which included the horse’s name, treated to a three-course lunch and had a group photo taken on Ascot’s famous presentation platform.

Sir Francis Brooke, Chairman of the Ascot Authority, said: “It’s very important to encourage and reward breeders at the Royal meeting. On the day of the victory it’s all about the owner, the trainer and the jockey, but the breeder doesn’t really get an opportunity to celebrate.

“The lunch is a really good way to do so a few weeks later and give the breeder their day at Ascot.

“We do the photograph on the podium so that all the breeders have something to remember the day by. For some breeders who breed a winner here, they may only have one mare and others are part of large organisations, but everyone realises they’re all very important to the sport.”

Among the breeders in attendance on Friday was John Deer, whose Oakgrove Stud was responsible for producing impressive Albany Stakes heroine Daahyeh. The filly is out of the Oasis Dream mare Affluent, who had been sourced by the operation for just 35,000gns at the 2016 Tattersalls December Mares Sale.

Her success in the Group 3 wasn’t entirely unexpected for Oakgrove Stud and Stud Manager David Hilton said: “We liked Daahyeh a lot as a yearling. We probably shouldn’t have sold her, but it was the right thing to do at the time. She went down well at the sales and won her maiden very well.

“When Raffle Prize won the Queen Mary the day before, we were full of confidence she’d run well.”

“Affluent is back in foal to Al Kazeem and then we’ll possibly look going back to Bated Breath or she might get a big upgrade, but that decision will be left to the boss.” 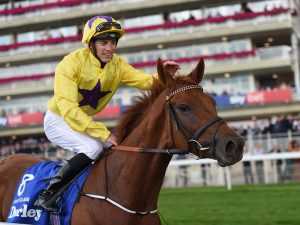 Up Next
Sea Of Class dies after illness