Victory in the Svenskt Derby is nothing new for Fredrik Johansson, but in 2011 it will have been especially welcome for Sweden’s multiple champion jockey.

Johannson has only recently returned to the saddle after injuring his shoulder in a shocking incident at Taby in May, in which two horses were brought down in the Stockholm Stora Pris.

Having cut across the field in the process of finishing second, visiting Irish rider Eddie Ahern was held responsible for the accident and was given a lengthy ban which ruled him out of Glorious Goodwood. Johansson, who had to pull his mount up sharply to avoid the ensuing chaos, subsequently underwent surgery on his shoulder and only returned to race riding on August 4.

“It was an amazing comeback for Fredrik,” said Svenskt Galopp official Elisabeth Oldengren. “He received a standing ovation and there were many happy tears at Jagersro. Fredrik is most definitely Swedish racing’s brightest shining international star.”

On just his fourth ride since his return, Johansson partnered the French-bred Refuse To Bend gelding Without Fear, owned by his great friend Nils-Petter Gill and trained by the legendary Anfinn Lund, to a four-length win in Sunday’s feature event at Jagersro.

Now 40, he grew up in Jagersro where his father Sven-Ake trained. He was twice champion apprentice before becoming champion jockey for the first time in 1991.

Owing to injury and illness – including a broken back in 2010 followed by a thrombosis in his lung – Johnasson has relinquished his champion jockey status in recent years but his win on Sunday was his 14th Derby win internationally, including seven in his homeland, two in Germany (Adlerflug in 2007 and Wiener Walzer in 2009), two in Denmark and three in Norway. During an illustrious career, he has also spent seasons riding in Hong Kong, England and Greece. 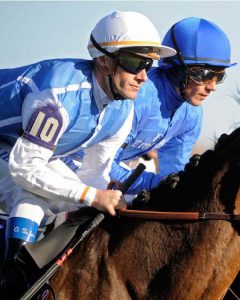 Up Next
Another Wertheimer golden girl