Reasons to be cheerful
Features

Setting up a new auction house is no easy feat but it was a challenge worth facing for Osarus, that has grown in stature

Deauville, Doncaster, Baden-Baden, Fairyhouse, Kildare, Newmarket. There’s a flow to the European yearling sales season and, barring the odd tweak here and there, it remains largely unchanged. Or at least it did until the arrival of a new name on the scene, complete with an enticing new venue, back in June 2008: Osarus.

Taking on the might of Arqana in France is not for the faint-hearted, particularly when establishing a new sales company in the midst of a global recession, but those behind the fledgling venture had plenty of experience in the market. The original trio of Guy Blasco, Nadja Govaert and Frédérique Lingua were joined by auctioneer Emmanuel Viaud, and later by Blasco’s son-in-law, the former jockey Sylvain Hureau, with both Lingua and Viaud having worked for Arqana and its predecessor, Agence Francaise, in Deauville.

Osarus held its first yearling sale at La Teste de Buch racecourse in Bordeaux in September 2008 and has subsequently added a jumping sale at Le Lion d’Angers in 2010, followed by a Flat breeze-up sale in Pornichet in 2011. This year it took the even bolder step of hosting a mixed sale in January at Clairefontaine racecourse, right on the doorstep of Arqana’s Deauville base.

We never thought Tattersalls would be interested in us; we were just a small, new company

“We wanted to offer French breeders the opportunity to sell in a different place,” says Viaud, who is himself based in Normandy, while his colleagues and fellow yearling inspectors, Blasco and Hureau, live in Pau in the south-west of France.

“For French breeders it was a bit of a problem just to have one sales company – a monopoly is not a good position – but it wasn’t easy to set up this kind of business. Arqana is huge and very successful, with good backing from the Aga Khan and Goffs.”
It wasn’t long, however, before Osarus found a powerful ally of its own in Europe’s foremost auction company, Tattersalls.

“I’ve known [Tattersalls’ French representative] Bertrand le Metayer for a long time and he called us three years ago asking if we might be interested in setting up a partnership with the ‘big house’,” explains Viaud. “We were a bit surprised because we never thought that Tattersalls would be interested in us. They are one of the biggest brands in the bloodstock world and we are just a small new company. We said yes, of course.”

Backing from such an established name has seen the company’s flagship sale at the picturesque coastal venue of La Teste go from strength to strength, with turnover of €464,700 from 46 horses sold at the inaugural sale climbing to €2,935,500 for 157 sold in 2013.

Viaud adds: “Step by step people have seen that we are selling winners, that we can pay the vendors and that the prices are good value. The French breeders are happy because they can sell. Six years after starting up we are now in a good place and starting to grow. People have confidence in us.

“The payment guarantee through our association with Tattersalls has helped enormously. Now we can pay the vendors 35 days after the sale. Without that we are not going to be sent the good horses to sell. The good figures from last year are because of that, I think.”

The association is not a one-way street and has benefits for Tattersalls, too, as Marketing Director Jimmy George explains: “It has given us exposure to the French and wider European market that we didn’t have a particularly detailed knowledge of

“That region of France is a very vibrant and significant part of the French racing and breeding industry – you have the likes of Jean-Claude Rouget and Francois Rohaut based near there at Pau – and there’s a decent number of up-and-coming young trainers in La Teste itself.

“The team at Osarus identified the fact that that particular area was good at breeding sharp precocious two-year-olds and perhaps they were the sort of yearlings who struggled to hold their own in the more rarefied atmosphere of other French sales.”

We’re inspecting around 1,000 yearlings this year and 600 of those are in Normandy

With the Osarus team currently in the throes of inspecting yearlings all over France for possible inclusion in this September’s sale, it has also recently held its fourth breeze-up sale at Pornichet racecourse on the Atlantic coast near Nantes. The catalogue contained 82 yearlings, all of whom were eligible for French owners’ premiums and – barring a few notable exceptions – were largely by domestic stallions.

As was to be expected, a decent number of French trainers and agents were in operation at Pornichet, but there were also visitors from Spain, Morocco and Sweden, while the British contingent included trainer David O’Meara with Nick Bradley of Middleham Park Racing, and agents Richard Venn and Liam Norris.

Venn, who will soon become a permanent French resident, is very familiar with the country’s various sales, both for Flat horses and jumpers, and welcomes the rise of Osarus. 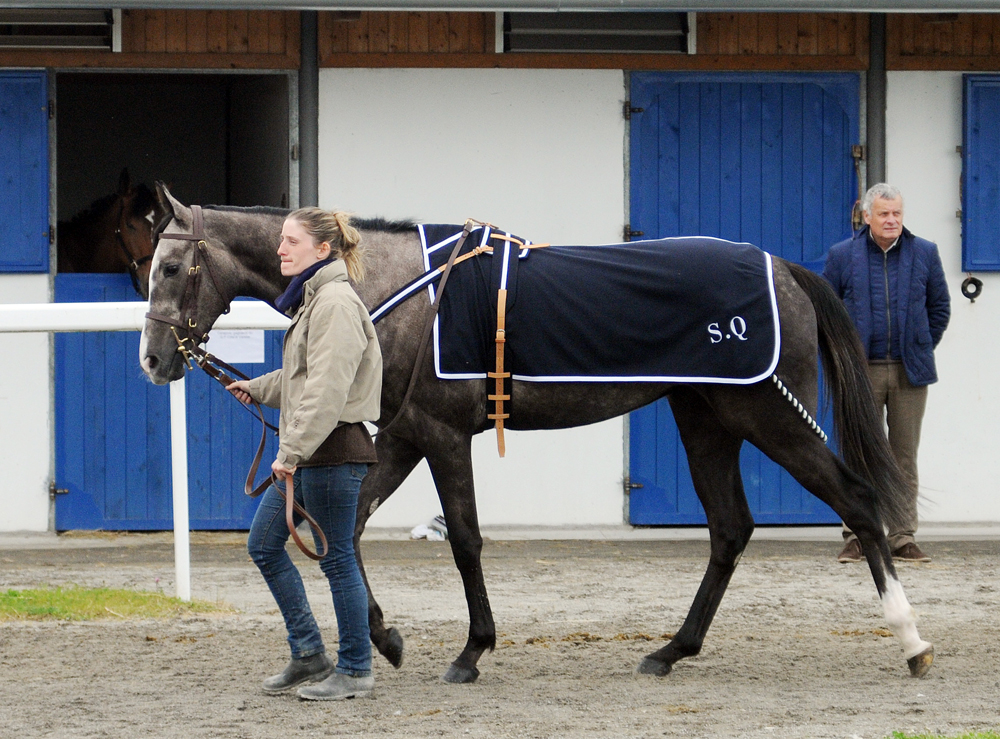 At €75,000, this Mastercraftsman filly became the most expensive Osarus breezer to date

He says: “The company definitely has its place in the market. It’s a very different atmosphere at their sales. It’s very relaxed and the September sale is a really good sale to go to. It’s becoming more popular – the average and median are going up, and more people are starting to go there.

“A bonus is that all the lots sold are French-bred with premiums. Sometimes you have to check that at Arqana, if that’s what it is you are looking for.”

Venn adds: “The Bordeaux region is where lots of the two-year-olds are bred. Certain studs down in that area specialise in early types, such as Alain Chopard at Haras des Faunes with stallions like Indian Rocket and Deportivo, and Haras des Granges, which stands Diamond Green.

“As for the breeze-up sale, it’s more about movement than speed – it’s quite a short straight at Pornichet, only two furlongs, and they don’t really get up to full speed. I’ve been there for the last two years and it’s not about drilling the horses, it’s about how they move and how they look.”

Liam Norris, who buys in partnership with William Huntingdon, concurs with Venn’s assessment and, having made his first visit to Pornichet in April, is likely to add the Osarus dates to his sales rounds.

He says: “It was a good sale for people looking to buy a type rather than a page. It was well organised with easy viewing and the breezes were conducted on a tight track with a lively, forgiving surface.

“I like to buy an individual but, equally, the French premiums are a huge draw. A lot more British trainers are targeting French races, even claimers, and I can see this sale becoming more popular. I’d definitely go back – we usually buy two or three yearlings in the second Arqana sale [October] and we like that sale because there are lots of French-breds in the catalogue, so the fact that Osarus deals solely in French-breds is a big plus.”

Perhaps unsurprisingly given the stallion’s success with his first crop last season, a daughter of Mastercraftsman topped the breeze-up sale at €75,000, and she became a dual Osarus graduate having cost Guy Petit €30,000 in La Teste last September. As a yearling, she was one of a nine-strong draft from the powerful Coulonces Consignment, the first time Anna and Etienne Drion had taken yearlings to Bordeaux. It will be no surprise to see more of the bigger names included in the catalogue this September.

“We’re inspecting around 1,000 yearlings this year and around 600 of those are in Normandy,” says Viaud. “Guy and Sylvain inspect in the south-west, I do Normandy and Bertrand Le Metayer helps me. We don’t meet each other every day in a head office, we work by conference call once a week.”

With the introduction of the January mixed sale timed to coincide with the popular Route des Etalons weekend in Normandy, another new initiative is planned this year by Osarus in developing its recently introduced store horse section at Le Lion d’Angers.

“The first time we had a jumping sale was in 2010 and last year we had stores for the first time,” explains Viaud. “We’ve partnered with a big show, Le National d’Obstacle at Haras du Pin on July 18, which includes foals and two-year-olds. All will be pre-entered for our Le Lion d’Angers sale and it’s up to the breeders to say if they don’t want to go.”

The straddling of the two codes is doubtless a shrewd move in a country famed for its top-class jumpers, but it is the Flat yearling sale which started the ball rolling for Osarus and is beginning to give the company’s name wider recognition. Graduates such as the Listed winner and Group-placed Kenzadargent, who cost €8,000 at La Teste as a yearling and was resold at Arqana’s Arc Sale last year for €140,000, are helping in this quest.

“We have winners almost every day and there’s no reason that we will not continue to grow,” says Viaud with quiet confidence. “The best is still to come.”

Teaming up with Tattersalls

Jimmy George, Marketing Director of Tattersalls, explains his company’s decision to enter into partnership with Osarus: “We’re a British-based company with an international client base, whether it’s vendors or purchasers, so it’s very important that we keep a very close eye on the global bloodstock market.

“In relatively recent years we identified an opportunity in Australia and we own a fraction below 20% of William Inglis, which is a company very similar to us both in its corporate ethos and its position in the bloodstock industry in the southern hemisphere.

“Turning our attention to Osarus was very much a similar thought process, albeit on a smaller scale. Europe is our doorstep market and France is one of the three most influential countries in European racing and breeding. Osarus is very much a fledgling company but it seemed a company with a future and in a very short space of time, from literally nothing, it has carved itself a niche in this very important market through hard work and identifying a sector of the French market in which there was an opportunity.

“We’re very pleased with the association. It’s a business with a bright future and we have a huge amount of admiration for the way the company has developed. You have to admire the progress it has made, in particular with its flagship yearling sale in September at La Teste.

“I think that’s already a significant part of the French bloodstock sales calendar which has very quickly established a loyal following from purchasers and vendors, and has a growing number of overseas buyers.” 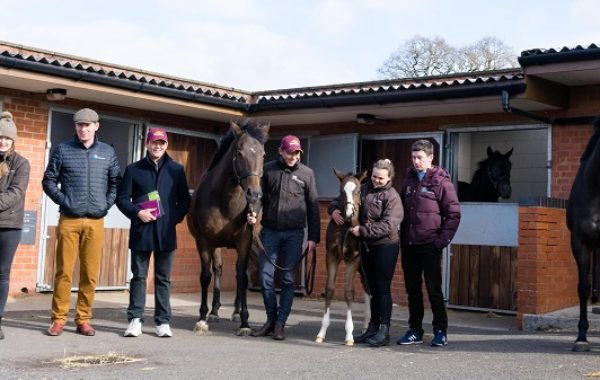 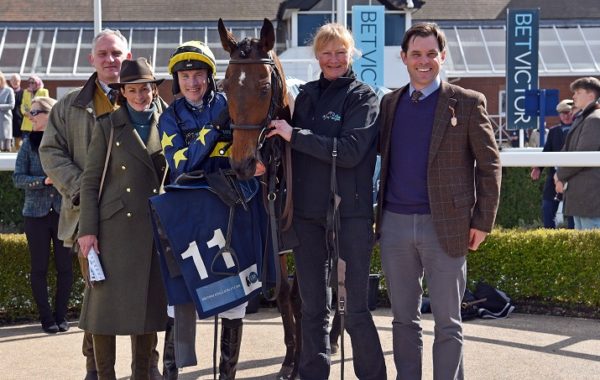 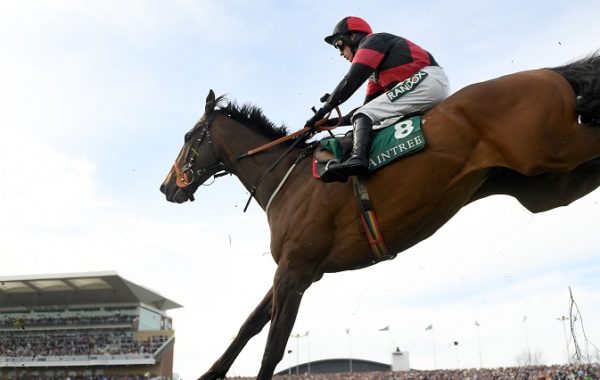 Breeder of the Month – David Brace 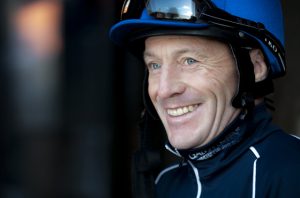 Up Next
Reasons to be cheerful