It is increasingly apparent that thoroughbred breeding is a global industry. Thanks to modern technology, it was possible to follow events at the recent Asian Racing Conference in Hong Kong without having to take a 13-hour flight from Heathrow, via the dedicated website which followed each day’s video presentations and included detailed pages of back-up material provided by the Hong Kong Jockey Club.

The first day was largely devoted to closed meetings of various official bodies, from which emerged a statement revealing that worldwide guidelines for out-of-training testing of horses for prohibited substances, including anabolic steroids, had been drawn up by the International Federation of Horseracing Authorities’ (IFHA) executive council, for ratification by its 60-odd members in October.

There are differences of opinion on the timing of testing in a horse’s life; this is a fundamental issue for breeders

IFHA Chairman Louis Romanet summed up the importance of the development when he said: “Without a strong out-of-competition testing programme, the interests of racing, breeding and wagering participants and stakeholders are seriously compromised.”

However, despite unanimity on the executive council, not every country is expected to sign up to every letter of the newly drafted Article 6e of the IFHA’s international agreement on breeding, racing and wagering, since there are believed to be differences of opinion on the timing of testing in a horse’s life – some countries want to start when a foal is born, others when a horse goes into training – and as this is a fundamental issue for breeders, further comment will have to wait until more details have made their way through the appropriate channels. Through this column in February, I outlined the TBA’s observations on this issue, and latest developments suggest that the legal position of racing authorities will be a factor in this debate.

Much more clear-cut was the message from the closing session devoted to racing and breeding in mainland China, which probably told us more in five hours than in a week’s worth of information gathering on an official trade mission.

China is occasionally portrayed as the last big frontier in the horseracing world, and has been the subject of attention from any number of sources, including Britain who through the efforts of the TBA recently secured an Export Protocol, albeit as a latecomer behind Australia, Ireland and France, but the conference highlighted more pitfalls than it offered promises and this supports the view that China is a long-term trading partner prospect.

Myriad layers of government involvement is one thing; the acute lack of registrations in the China Stud Book and of export licences, plus low regard for equine veterinary services, are far more important matters for breeders.

The Chinese Equestrian Association, which includes horseracing among its seven government departmental responsibilities, has laudable ambitions to develop the sport, but there is no escaping the fragmented nature of staging racing and the go-stop experience of most racecourses other than in the industrial city of Wuhan, as illustrated at the conference by Dr Kim Mak of the Hong Kong Jockey Club, which is setting up a stabling and training centre near Guangzhou.

That in turn adversely affects the China Stud Book, which comes under the authority of the China Horse Industry Association and was approved by the International Stud Book Committee in 2002.

Yet while there are said to be more than 6.3 million horses in mainland China, only around 3,000 are thoroughbreds, and just 400 are formally registered, of which about 100 were foals born in the ten years to 2012 and 39 were mares, according to Kyo Shimizu, secretary general of the Asian Stud Book Conference.

There is simply no requirement or incentive for thoroughbreds, imports or homebreds, to be entered into the China Stud Book. The figures, allied to welfare issues that can be encapsulated in the statistic that there is one equine operating theatre in the whole of China, add up to a salutary warning that China’s emerging industry needs our support and guidance. 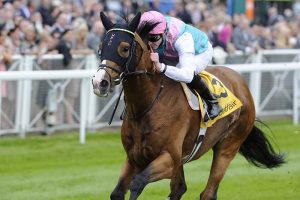 Up Next
Frankel family continues to fire for Cecil