Would I be into racing if a kid these days...?
Exclusive Columns

Will the market sustain numerical hike?

Round one of this season’s yearling sales was completed in Deauville in mid-August and by the time this publication hits the streets the major sales of Goffs UK and BBAG will also have taken place.

These three sales are all very different in character but one factor of Arqana’s August Sale that will have caused concern if not surprise is that vendors found it tougher than they have done in recent years.

The downturn in the breeze-up market waved a warning flag ahead of this autumn’s sales, along with the fact that sales companies have reported a greater demand for places this year. The comparative figures for those catalogues to have been released to date and all bar Goffs’ Orby and Sportsman’s Sales and Arqana’s V.2 show a rise in numbers.

Tattersalls Ireland’s Ascot Yearling Sale was only introduced last year and this time around has an extra 37 yearlings in the book, while the company’s flagship Irish sale is to some extent a victim of its own success and, divided into two parts for the last few years, it now has an extra 87 yearlings on offer.

Copious amounts of stamina and Berocca will be needed to get through the first two weeks of October at Tattersalls, which has sensibly brought Book 4 into the same week as Books 2 and 3 instead of tagging it onto the end of the Horses-in-Training Sale, though it is now scheduled for the Saturday morning of Champions Day.

Book 4 this year features 122 yearlings compared to 47 last year, and it is far from just a problem for this sale but, given that the Book 4 average for the last two years has been less than 4,000gns, most vendors will approach this, and other auctions at a similar level, knowing that they will lose money if they sell at all.

The TBA’s Economic Impact Study will be published in full in the first week of September but the snapshot that was presented by Philip Newton at the AGM in July pointed to the fact that 66% of British breeders operate at a loss and, unsurprisingly, were dwindling in numbers.

How the numbers hold up going into next year will be interesting to see but it’s easy to imagine that there will be some sort of adjustment when it comes to the number of mares being covered next season.

In the coming months it will be decided whether ot not the TBA’s proposed GB-bred bonus scheme will go ahead. Despite the woes faced by some breeders, as referenced above, it has already been a banner year for horses carrying the GB suffix.

On August 13, GBRI highlighted the fact that British breeders had been responsible for 16 individual winners of 20 Group 1 races, and those numbers have subsequently increased to 18 and 22.

Pretty Pollyanna became the latest high-class success for Bill and Tim Gredley in the Darley Prix Morny will provide some compensation for Big Orange ruled out for the season.

With an increasing focus on sire power at the sales, it’s been heartening to see Juddmonte’s Oasis Dream enjoying such a good season. He’s had plenty of success throughout his stud career but one quiet spell led to buyers largely turning their backs on his offspring.

With a juvenile strike-rate of 50% at the time of writing, including Pretty Pollyanna, not to mention the Prix Maurice de Gheest winner Polydream flying the flag for his three-year-old crop, let’s hope we see a resurgence in demand for Oasis Dream yearlings this season.

He is also the grandsire of the Marie Matthews-bred Alpha Delphini, who became the first Group 1 winner for Mickley Stud’s Captain Gerrard and the second, after Tangerine Trees, for his dam Easy To Imagine in the Nunthorpe Stakes.

Incidentally, apart from the fact that Pretty Pollyanna, Polydream and Sea The Stars’s dual Oaks heroine Sea Of Class are all Group 1-winning fillies, they are linked by the fact that they are all on the small side.

I’m constantly surprised at the preoccupation with big horses at the sales – a number of sales yearlings these days look like show horses rather than athletes.

Of course, good horses come in all shapes and sizes – and from a range of sales at varying prices – but it’s worth bearing in mind that when it comes to selecting yearlings, size doesn’t always matter. 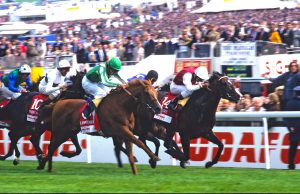 Up Next
Would I be into racing if a kid these days...?