It is certainly gratifying to know that a new formal prize-money agreement between horsemen and BHA on the one side and racecourses on the other is now high on racing’s agenda after the very public fall-out with ARC. The last of these agreements ran from 2014 to 2017, while the terms were largely continued with in 2018.

Broadly, the agreement commits racecourses to contribute either a minimum of 40% or 33% of their media rights income to prize-money, depending on whether the racecourse is categorised as being in the Premier Tier or Standard Tier. On their side of the agreement, the horsemen and BHA would commit to ensuring certain benefits were given to participating racecourses, one of which would be to allow a racecourse to stage any of the 250 BHA-owned fixtures allocated each year.

Of course, there are a number of so-called special circumstances, such as the loss of a major sponsor, under which racecourses can reduce their contribution, but, by and large, the agreements worked well, with good faith shown on both sides, and there is now growing optimism that a new agreement will soon be ratified with most racecourses.

The extraordinary growth of media rights payments to racecourses during the past two decades has made these prize-money agreements a vital cog in the machinery of racing administration. When racecourses were receiving minimal income from bookmakers to allow them to show their pictures in betting shops, the rights were not that relevant. Now, however, with the annual figure in the region of £140m, it has become essential to have a mechanism that reflects the crucial part that owners and horsemen play in generating this money.

Although racing is now fearful that the new FOBTs legislation will deplete betting shop numbers and so materially impact on the sport’s income, the current uncertain climate should create an incentive for horsemen and racecourses to work closer together to their mutual benefit.

Even with a new deal in place, the spread and clarity of information that horsemen and the BHA receive from racecourse media companies on media rights deals is superficial at best. The more we are allowed to penetrate the outer shell of these often complex arrangements, the more it has the potential to benefit all parties. At the same time, owners and horsemen would take comfort and assurance from knowing that income for which they are fundamental in creating is being used for the overall good of the sport.

As betting operators are now agreeing to share more data with the Levy Board around those races and fixtures that generate the most turnover and profit, so racecourses, horsemen and the BHA should have similar detailed discussions, perhaps through the medium of an independent body whose members would, of course, be committed to confidentiality.

It is entirely understandable that racecourses have over the years gravitated towards the retail operations of bookmakers as the place to find the richest pickings, but, if we are to believe those pessimistic forecasts for betting shops closures, then racecourses, or their media rights representatives, should surely start to broaden their horizons.

Everybody now expects to see live pictures of sporting events and, as more betting moves away from shops towards online, there is a logic to putting greater focus on the websites of betting operators as a means to increase income from live streaming. Of course, this is already happening, but, when you look at the list of online bookmakers worldwide, you wonder whether those charged with selling the racecourses’ live pictures are fully exploiting this area of the market, especially internationally.

Whatever the soundness of this argument, it is possible that racecourses would find fresh impetus from working still closer with the rest of the industry. Understanding all the implications would allow the sport to make better informed decisions about future strategy, while it would be a step towards the industry being able to construct a much-needed and joined-up commercial plan. 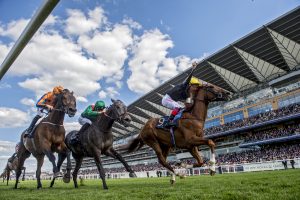 Up Next
Let's continue to savour the stayer