Under the eerily empty Twin Spires of Churchill Downs in Kentucky on Friday, the harsh nature of today’s bloodstock landscape was laid bare as the current Classic generation fought out the finish to this year’s delayed running of the Kentucky Oaks.

At the head of proceedings were a pair of tough Daredevil fillies. To many, the favoured contender was Kenny McPeek’s Swiss Skydiver, a mere $35,000 yearling who had crushed the opposition in the Grade 1 Alabama Stakes at Saratoga on her previous start. But while Swiss Skydiver briefly held a winning chance, she came up against a determined rival in her paternal half-sibling Shedaresthedevil, whose strong finishing run was enough to overwhelm the chasing pack and secure a length-and-a-half victory.

Shedaresthedevil was relatively unfancied at 15-1 for trainer Brad Cox but she has always been held in high regard by her connections, which include Qatar Racing. Qatar bought into the filly after her debut success last summer and following a partnership restructure that consisted of the addition of Flurry Racing Stables LLC and Big Aut Farms when she passed through Keeneland for $280,000 last November, continued to reap rewards as a further pair of Grade 3 successes came her way.

For Daredevil, the accomplishment of siring the first two home in a Kentucky Classic was nothing short of momentous, one that was made even more notable by the fact that these fillies are the product of a first crop bred off a fee of just $12,500. No other American second-crop sire can boast two individual Grade 1 winners – and for Triple Crown hero American Pharoah, that Grade 1 breakthrough remains conspicuous by its absence – while on Sunday, yet another Grade 1 performer emerged in Esplanade, a member of his second crop who ran second in the Spinaway Stakes at Saratoga. All of which makes Daredevil one of the world’s most rapidly emerging sires.

“At the time of his export, Daredevil hadn’t fared too badly with his first crop of juveniles. Yet it evidently wasn’t enough to keep him in Kentucky”

Such a development, however, is not such great news for Kentucky’s bloodstock industry. Instead, it will have been celebrated by Turkish breeders, which welcomed Daredevil’s arrival to the Turkish Jockey Club roster following his sale by WinStar Farm last autumn.

The Turkish Jockey Club were determined in their pursuit of a number of stallion prospects last year. The middle-aged Derby winner Authorized and Myboycharlie were high-profile acquisitions out of France while from Claiborne Farm in Kentucky, they purchased the useful stallion Trappe Shot. It was WinStar Farm however, who proved to be the most fertile source, with the outfit offloading Bodemeister, Super Saver and Daredevil in one fell swoop.

Super Saver and Bodemeister are both successful stallions capable of producing Grade 1 horses. But by the autumn of 2019, they were falling out of commercial favour and at the ages of 12 and 13 respectively, had received plenty of opportunity to hold their own. A large enough offer was always going to make them susceptible to export.

On the other hand, for all that Daredevil sat among the lower echelons of the Kentucky stallion market, he was a younger horse, one whose first crop were still only two when his sale to the Turkish Jockey Club was announced in late November.

At the time of his export, Daredevil hadn’t fared too badly with his first crop of juveniles, with Shedaresthedevil, then a Grade 2-placed filly, leading the way among ten winners alongside the multiple stakes winner Deviant and stakes-placed Jewel Of Arabia. Yet it evidently wasn’t enough to keep him in Kentucky.

How ‘bout this finish?!?! pic.twitter.com/jbuG4ysy54

The story of Daredevil is reflective of the cut throat nature of the stallion industry. Nor is it confined to Kentucky. Fuelled by that annual craze for first-year stallions, onlookers are just as ruthless in their assessments of young horses over here. After all, the next new exciting horse is just around the corner; once again, that was very evident at last week’s Goffs UK Premier Sale where buyers enthusiastically pursued the progeny of first-crop stallions such as Cotai Glory and Profitable while binning those whose first two-year-olds have yet to hit elite heights, regardless of whether they’re siring winners or not.

Daredevil himself had a brief but productive racing career. Trained by Todd Pletcher for a partnership that included WinStar Farm and the China Horse Club, the $260,000 yearling romped on debut at Belmont Park and followed up next time out with an easy win in the Grade 1 Champagne Stakes.

Daredevil entered Classic calculations after that effort but that was as good as it got. He made just three more starts, with the highlight coming when second in a Grade 3 Kentucky Derby prep, and was duly retired to WinStar Farm for the 2016 season.

Priced at $12,500, Daredevil was the cheapest of three stallions to retire to WinStar that season but he boasted an attractive profile as a Grade 1-winning juvenile by the ever-popular More Than Ready, and that translated into a first book of 123 mares.

Daredevil’s first foals also gained positive reviews at the 2017 Keeneland November Sale, where they averaged close to $85,000, and went on to sell for up to $230,000 as yearlings. The group included several who made their way to Europe as breeze-up prospects, among them Better The Devil, a debut winner last year for Archie Watson.

All the while, Daredevil continued to cover three-figure books but then in his fourth season, traditionally a difficult period in any stallion’s career, interest plummeted to the extent that he covered only 21 mares at an advertised fee of $7,500.

The question now being asked is whether Daredevil will make a comeback. Three years ago, WinStar repatriated Take Charge Indy, who had been sold to Korea before he had even had a runner, following a promising flurry of runners, but buying out of Turkey is a different proposition.

Daredevil was well received at his new home this season, covering 140 mares at a stud fee that equates to around $5,000, and given that his stud career is now being managed by the Turkish Jockey Club, which is overseen by the government’s Ministry of Agriculture, Food and Livestock and promotes the improvement of the breed, any potential return to his birthplace is likely to be expensive and not without its challenges – if it is considered by his new owners at all.

Appropriately, Shedaresthedevil and Swiss Skydiver were both bred in Kentucky by WinStar Farm. Shedaresthedevil was one of the highlights of that strong group of weanlings who went to auction in 2017 as a $100,000 purchase by Big Cuse Bloodstock. However, she was later unsold for just $20,000 as a yearling.

She is a half-sister to the Grade 3-placed Mojovation and out of Starship Warpspeed, a winning daughter of WinStar veteran Congrats from the extended family of Hernando.

Starship Warpspeed has a yearling filly by WinStar’s Speightster and a filly foal by the farm’s Exaggerator. 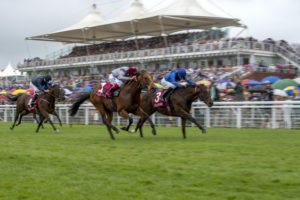 Up Next
Machiavellian's legacy lives on