Levy Board trusted but its model is outdated

To paraphrase Mark Twain, reports of the death of the Horserace Betting Levy Board have been greatly exaggerated.

For the Levy Board, apparently living on borrowed time for a number of years, and due for certain extinction less than a year ago, will now continue to perform its role of collecting money from the betting industry and distributing it to racing.

It has become a well-trodden path to say how the distribution of the industry’s funding was to be put into the hands of a new Racing Authority, while the collection process was to be carried out by the Gambling Commission, and how this never became law because a significant group of cross-party MPs and Peers decided that a Legislative Reform Order was not the right instrument to use to implement it.

It might seem strange that this rejection has been accepted with barely a peep of disapproval from racing. There had, after all, been great support across the whole of racing for the new structure, which would have allowed the industry to decide on its own spending policy, unfettered by bookmaker interference.

So why this lack of reproach? Well, it has much to do with the fact that racing has learnt it must keep the government on-side. There is also general recognition that, whatever the criticisms of the Levy Board, it has always been and remains a safe pair of hands.

Neither is the board anything like as fractured and confrontational as it used to be. Many of us remember the times when the annual levy determination was often preceded by an almighty row between racing and bookmakers, and sometimes even the government of the day was dragged in to adjudicate.

We have, of course, seen what government support can do when the scope of the levy was widened to include those UK bets processed offshore and we remain alive to the possibilities of what might emerge from further legislative changes.

These will come only if we continue to impress on the government of the day that the racing industry is crucial both to the rural economy and to rural employment, that it represents the acceptable face of betting, that it creates the best possible welfare environment for both staff and horses and it is open and inclusive in embracing people of all social standings and minority groups.

By constantly pressing these arguments, while showing that racing is vulnerable not only to the effects of betting shop closures but also to a fluctuating source of income from the levy itself, can we hope to get the changes made that would allow us to rejuvenate levels of prize-money while injecting funds into self-help schemes.

Only recently we were disappointed to find levy yield dropping by £17m on the previous fiscal year’s £95m, reviving questions as to whether the gross profits system on which the levy is based is really fair to racing. Certainly, it was regarded as fair in 2001 when it was introduced, but the betting world has changed fundamentally since those days.

Then, the exchanges were barely on the horizon and nobody could have predicted the extent to which they would become so central to the whole betting system in this country, or how in the intervening years they would drive down the betting margins on which racing’s levy payments are based.

Even less could anybody have then predicted the way bookmakers would use horseracing as a loss leader on Saturdays and at big festival meetings to draw in new customers with money-back offers, thereby squeezing the margins on racing to next to nothing.

It is why serious discussion needs to be had on a return to a levy based on betting turnover rather than gross profits – or on some form of in-between hybrid system – to provide a much truer reflection of racing’s continuing worth to the betting industry. 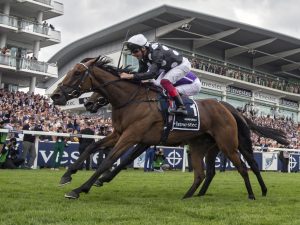 Up Next
Sadler's Wells making Epsom his own