Sadler’s Wells making Epsom his own 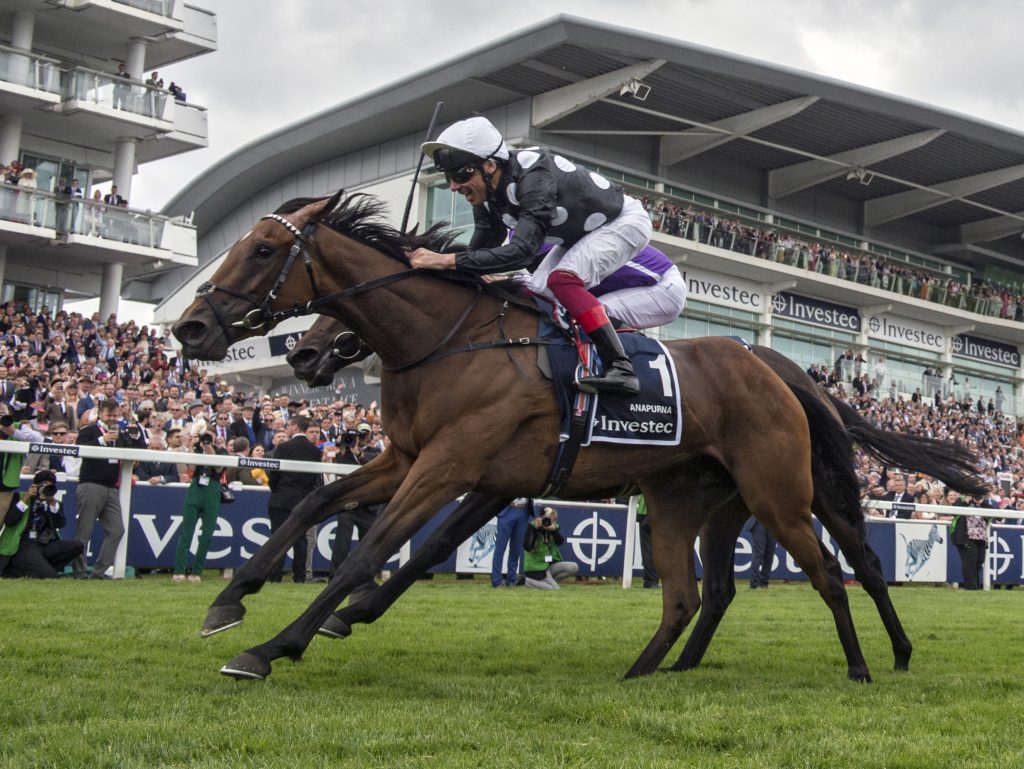 In the build up to the Epsom Classics, the spotlight was understandably turned firmly in the direction of Galileo, the great stallion bidding for a tenth consecutive sires’ championship and 11th in all. After all, the 14-strong field for the Investec Oaks included two fillies by Galileo and three by his exceptional son Frankel, while two others had dams by the 2001 Derby winner.

Galileo’s dominance in mile-and-a-half Classics was even more obvious in the Derby. All but one of the 13 runners were members of the Galileo male line, with six sons of Galileo, five grandsons and one great-grandson. The single exception, Camelot’s son Sir Dragonet, has Galileo’s sister All Too Beautiful as his second dam.

Even so, I think that Galileo should share some of the Epsom limelight with his own extraordinary sire, Sadler’s Wells, whose unequalled tally of 14 sires’ championships was generally considered unapproachable until Galileo’s career gathered full momentum.

The fact that Sadler’s Wells and his sire Northern Dancer were both 26 when their final foals were conceived suggests that the 21-year-old Galileo still has plenty of mileage in him (the Return of Mares credits him with covering 164 mares at the age of 20 in 2018). That said, he is already credited by Equineline as having sired more foals than Sadler’s Wells, their respective totals standing at 2,749 and 2,259. In fact, their northern hemisphere totals are similar, as Galileo’s five years shuttling to Australia contributed around 585 foals towards his total.

Galileo has already comfortably overtaken Sadler’s Wells when it comes to number of Derby winners, with Anthony Van Dyck following in the footsteps of New Approach, Ruler Of The World and Australia as his fourth winner. Sadler’s Wells’s total stood at only two and it took him an unbelievably long time to get off the mark, with his first Derby winner – none other than Galileo – coming in 2001, 20 years after Sadler’s Wells’s birth. Then, like the proverbial London bus, another one arrived right behind, with High Chaparral taking the 2002 race.

They came from their sire’s 13th and 14th crops, but Sadler’s Wells had been knocking at the Derby door for a long time. In the 11 years from 1990 to 2000, Sadler’s Wells was responsible for five Derby seconds (Blue Stag, King’s Theatre, Tamure, Dushyantor and Daliapour), while his son Saddlers’ Hall sired Silver Patriarch, the short-head second in 1997. Sadler’s Wells’s daughters also got into the act, producing City Honours and Sakhee, the runners-up in 1998 and 2000. In other words, Sadler’s Wells was associated with eight Derby seconds in 11 years. He also went close to winning the Derby in 2003, when The Great Gatsby led until the final 100 yards, and 2006, when Dragon Dancer went down by only a short-head to Sir Percy.

By the time Galileo provided that elusive first Derby success, Sadler’s Wells had already been represented by four winners of the Oaks (Salsabil, Intrepidity, Moonshell and Imagine) and was later to sire a fifth winner in Alexandrova. He had also been responsible for four victories in the Coronation Cup, over the Derby course and distance, thanks to In The Wings, Saddlers’ Hall, Opera House and Daliapour, and he was later to add Yeats and Ask to the list.

So it’s hardly a surprise that Sadler’s Wells’s descendants have continued to exert a powerful influence on Epsom’s three Group 1 races over a mile and a half. Needless to say, Galileo hasn’t been the only son to make a considerable impact on the Derby. Montjeu, another of Sadler’s Wells’s brilliant mile-and-a-half performers, also sired four Derby winners, thanks to Motivator, Authorized, Pour Moi and Camelot. Pour Moi himself sired the 2017 winner in Wings Of Eagles, whereas Masar became the first grandson of Galileo to win in 2018. Altogether, the Sadler’s Wells male line has been responsible for 12 of the last 19 Derby winners, while it was a daughter of Sadler’s Wells which produced the 2010 winner Workforce.

It is a similar story in the Oaks. Over the last seven years, victory has gone to three daughters of Galileo – Was, Minding and Forever Together – and now to three of his grand-daughters, in the shape of New Approach’s daughter Talent, the Nathaniel filly Enable and Frankel’s daughter Anapurna.

But it is here that the glory arguably needs sharing with Sadler’s Wells. The phenomenal Enable is inbred 3 x 2 to the 14-time champion sire and Anapurna is inbred 3 x 3, with her grandsires being Galileo and Montjeu. For good measure, there are also two (more remote) lines of Sadler’s Wells in the pedigree of Madhmoon, who failed by only half a length to take the Derby. Sir Dragonet, the Camelot colt beaten only three-quarters of a length into fifth place, is inbred 3 x 3, via Montjeu and All Too Beautiful. Incidentally, another of Camelot’s smart sons, the ill-fated Sir Erec, is another inbred 3 x 3 to Sadler’s Wells, this time via Montjeu and Galileo.

The concept of combining Montjeu and Galileo first gained breeders’ attention when Teofilo’s son Parish Hall sprang a 20-1 surprise by defeating Power and Most Improved to win the 2011 Dewhurst Stakes. This grandson of Galileo and Montjeu had shown with his debut win in early-April that combining these two great Classic influences needn’t result in a slow-maturing mile-and-a-half horse. All four of Parish Hall’s subsequent black-type successes were gained at around a mile and a quarter, not a mile and a half.

The number of horses inbred to Sadler’s Wells is sure to multiply as time pushes him further back in pedigrees. Bearing in mind that Galileo had a fine record with mares by Sadler’s Wells’s three-parts-brother Nureyev, it is a little surprising that only one of his many Group/Grade 1 winners, the Breeders’ Cup Juvenile Turf winner Line Of Duty, has two lines of Sadler’s Wells, in the second and fourth generations. Another of his sons with 2 x 4 inbreeding to Sadler’s Wells was the smart Cliffs Of Moher, who was beaten only half a length in the 2017 Derby.

No doubt we are going to see more Classic performers like Anapurna. One of the problems breeders faced when Frankel retired to Banstead Manor was that his grandsires, Sadler’s Wells and Danehill, were two of the most widespread influences in the Stud Book – a consequence of these two jointly dominating the leading sire’s title 17 times in an 18-year period.

Although inbreeding to Sadler’s Wells wasn’t particularly in vogue back in 2013, when Frankel covered his first mares, several breeders were prepared to try. As many as 17 members of this first crop had two lines to the great Coolmore stallion within four generations. Three of them – Eminent, Cunco and Last Kingdom – became Group winners, with Eminent (inbred 3 x 3) finishing fourth in the Derby before becoming a Group 2 winner. (Incidentally, assessing Frankel’s effectiveness with Sadler’s Wells inbreeding isn’t made any easier when some of the horses, such as Cunco, are also inbred to Danehill.)

Contingent, an impressive maiden winner from Frankel’s second crop, looked to have great potential until she met an untimely death. She was inbred 3 x 3. It is hard to say at this comparatively early stage whether inbreeding to Sadler’s Wells is a plus in Frankel’s progeny, but Eminent and Anapurna are proof that inbreeding 3 x 3 to Sadler’s Wells with Frankel can produce Classic contenders. The similarly-bred Teofilo and Roderic O’Connor also have Group winners inbred 3 x 3 and 3 x 4.

Kitten’s Joy, who flies the flag for the Sadler’s Wells male line in Kentucky, has three Graded stakes winners inbred to Sadler’s Wells, including the Grade 1-winning turf horse Divisidero, so a second line of Sadler’s Wells could be useful to Kitten’s Joy’s European-based sons, led by Roaring Lion. 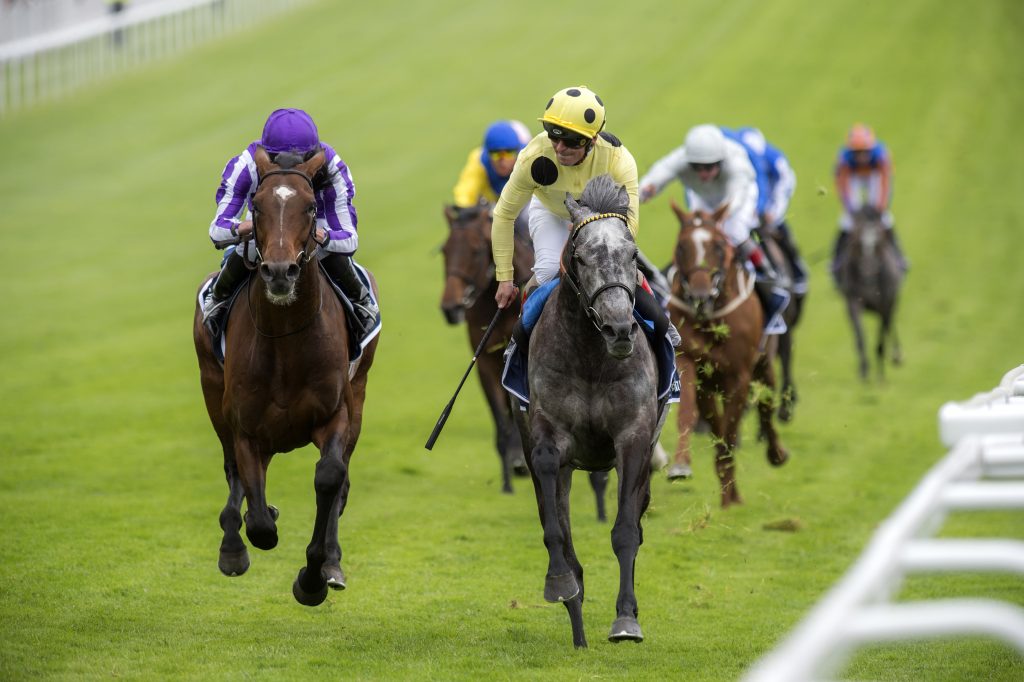 Coronation Cup victor Defoe did not appeal as a commercial sire and was gelded – Photo: George Selwyn

As someone who has regularly moaned about the reluctance of many commercial breeders to patronise middle-distance horses, I couldn’t help wondering whether this prejudice was a sizeable contributing factor to the lack of British-trained contenders for this year’s Derby.

It is certainly responsible for the lack of demand for potential stallions with middle-distance backgrounds. I was reminded of this when Roger Varian assessed Defoe in his Racing Post stable tour:

“He was gelded at the end of last season as he didn’t look to be building a commercially attractive stallion’s profile,” Varian explained. “And it might elongate his racing career. He’s a good, solid horse and he’d be lovely to have around for another two or three years.”

This was a realistic assessment of a horse who had won the Geoffrey Freer Stakes over an extended 13 furlongs as a three-year-old plus the John Porter Stakes and Jockey Club Stakes over a mile and a half at the age of four. He has now won the Coronation Cup and the Hardwicke Stakes as a gelding.

Had he been a multiple-Group-winning sprinter, stud owners would no doubt have been prepared to
give him a chance as a stallion. Unfortunately for Defoe, virtually his only chance of a stallion career would have been as a sire of jumpers – a career which has ultimately awaited several other Coronation Cup winners, such as Yeats, Shirocco, Scorpion and Fame And Glory in recent years.

Once upon a time a stallion career overseas might have been an option, with the various Commonwealth countries happy to use colts which represented Europe’s best Classic bloodlines. Nowadays there is still strong demand from Australia for middle-distance stayers, but as racehorses, not stallions.

South America used to be
another outlet, as was Japan, but at the time of writing there was only one European-raced stallion – Harbinger – among the top 25 Japanese stallions. The southern hemisphere countries largely seem happy for shuttle stallions to fulfil their need for different bloodlines, while other countries have economic problems which limit their spending power.

Maybe gelding will become an option for more horses which are thought unlikely to reach the highest level. Defoe is one of three 2019 Group 1-winning geldings, another being the Lockinge Stakes winner Mustashry, already a Group 3 winner when he was gelded in 2018. However, the Prix d’Ispahan winner Zabeel Prince was a once-raced maiden when he faced the unkindest cut of all. We have also seen the gelded Aspetar take the Grand Prix de Chantilly. 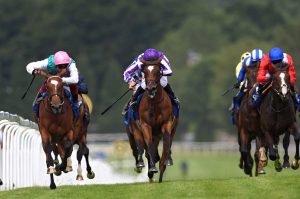 Up Next
Fleet Girl family ensuring a rich summer for Juddmonte